Pre-tournament favorite Kakuryu took another step at Ryogoku Kokugikan toward his sixth top-level title by beating No. 3 maegashira Chiyotairyu, who remains winless in 11 matches against the 33-year-old Mongolian grand champion.

Kakuryu ended the first week of the 15-day tournament by blowing away Chiyotairyu (2-5) from the opening jump. Planting both hands on Chiyotairyu's chest, the yokozuna gave his opponent little chance of escaping the quick frontal force out.

"He is the kind of opponent who can push you out in a heartbeat. That was the only thing I was concerned about," Kakuryu said. "The most important thing going forward is to concentrate on one bout at a time."

Tochinoshin moved to 7-0 by forcing out No. 1 Kotoshogiku (2-5) in an impressive display of strength. After getting shoved toward the edge, Tochinoshin hoisted the 35-year-old former ozeki by his belt and drove him out backwards. 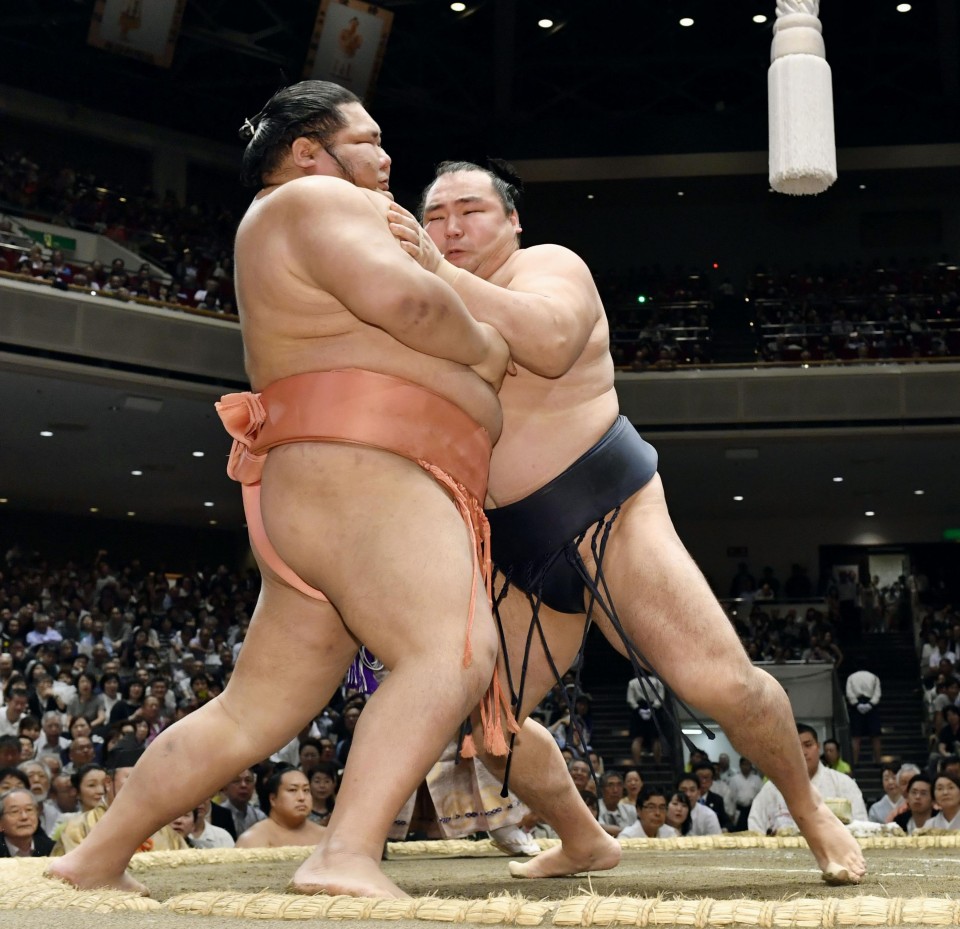 "I didn't do that badly," Kotoshogiku said. "I needed to present a heavier load for him by leaning against (my opponent) more."

Tochinoshin is poised for promotion straight back to ozeki, needing just three more wins here to return to sumo's second-highest rank following his demotion after the spring tournament.

Ozeki Goeido (4-3) bounced back from two-straight losses by beating No. 3 Tamawashi (3-4). Goeido countered Tamawashi's slapping attack by going inside for a belt grip. He quickly pushed out the Mongolian, who claimed his first top-level title at the New Year meet.

Ozeki Takayasu improved to 4-3 by pushing out No. 2 Daieisho (3-4), who was looking for another upset after beating Goeido on Day 5. Takayasu absorbed Daieisho's initial thrusting attack before shoving him off balance and pushing him out.

Sekiwake Ichinojo dropped to 2-5 with a loss to No. 1 Hokutofuji (3-4). The maegashira was quick off the mark and blew the 227-kilogram Mongolian out of the ring with a pushing attack.

Mitakeumi improved to 5-2 while handing fellow komusubi Aoiyama (1-6) his fifth straight loss. After forcing Aoiyama back with a thrusting attack, Mitakeumi resisted a pull-down attempt before pushing out the 193-kg Bulgarian.

Newly promoted ozeki and crowd favorite Takakeisho (3-2-2) is set to rejoin the tournament Sunday after missing three matches with a knee injury suffered on Day 4 against Mitakeumi.