After playing golf in the morning and watching a grand sumo tournament in the afternoon, U.S. President Donald Trump and Prime Minister Shinzo Abe had dinner with their wives at a Japanese charcoal grill restaurant in a glitzy part of Tokyo on Sunday evening.

Sitting at the counter in front of a few dishes, Trump told the press they talked "a lot today about trade and military and various other things," describing the day as "very productive" and expressing confidence that would also be the case at their summit Monday. 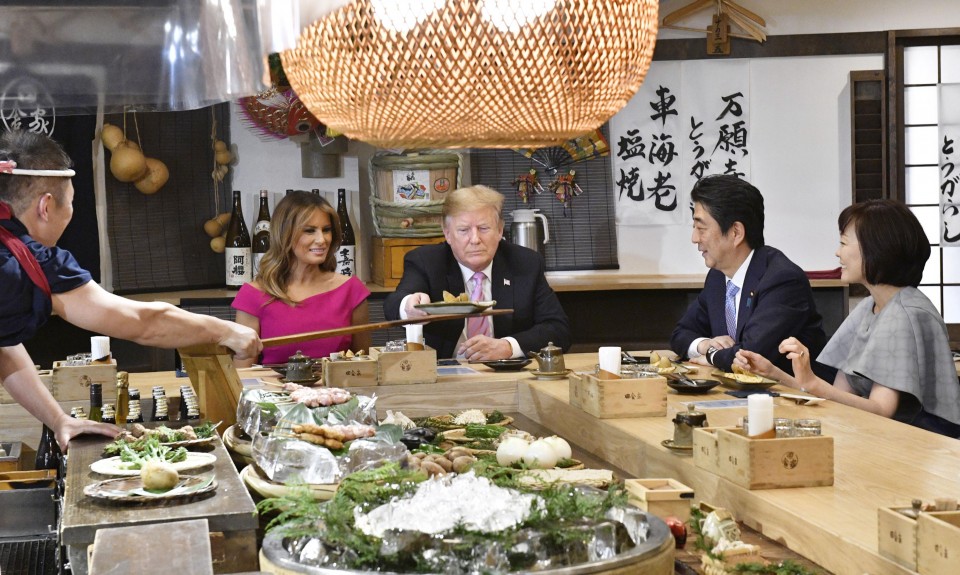 Abe said he enjoyed playing golf with Trump very much and characterized the U.S. President as "very tough" on the golf course, "as much as when he's making deals."

Abe also said he wanted to relax with Trump at the restaurant to exchange views and discuss a wide variety of issues.

Abe organized the intimate meal at Inakaya in Roppongi, which has an open "robatayaki" fire where two people on their haunches grill vegetables, fish and meat chosen by guests sitting across the counter.

Dishes are offered on large paddles to the waiting guests in the small rustic restaurant.

Japanese potatoes with butter, salad, grilled chicken and wagyu beef steak with broccoli and carrots, as well as vanilla ice cream, were on the menu for the Trumps and Abes, according to the White House.

Inakaya offers other dishes, including sashimi, noodles and traditional appetizers such as salmon roe with grated radish and marinated sea cucumber guts.

Though Trump is teetotal, Inakaya has a list of traditional Japanese alcohol such as sake and "shochu" distilled spirits.

Established in 1970, Inakaya has two venues, in Roppongi and New York.