Police in southwestern Japan are tackling a shortage of female recruits through a fashion show, social networking sites, and online videos aimed at female high school and university students.

The fashion show is just one of the methods the police force in the southwestern prefecture of Fukuoka are utilizing in order to increase the percentage of its female recruits, the lowest among the country's prefectural police for the past two years.

The fashion show held on March 27 invited about 100 high school and university students, as female police officers wearing a variety of work uniforms walked along the runway to upbeat music.

The uniforms exhibited the range of departments in the police force, including those for motorcycle riders as well as those worn in crime labs.

Female police officers introduced their departments in presentations following the show, and held hands-on demonstrations where attendees learned how to take fingerprints from a bottle.

"My impression is now a positive one," said Ayano Hori, a 16-year-old high school student attending the event. "There were uniforms I hadn't seen before, and I was introduced to the variety of available jobs." 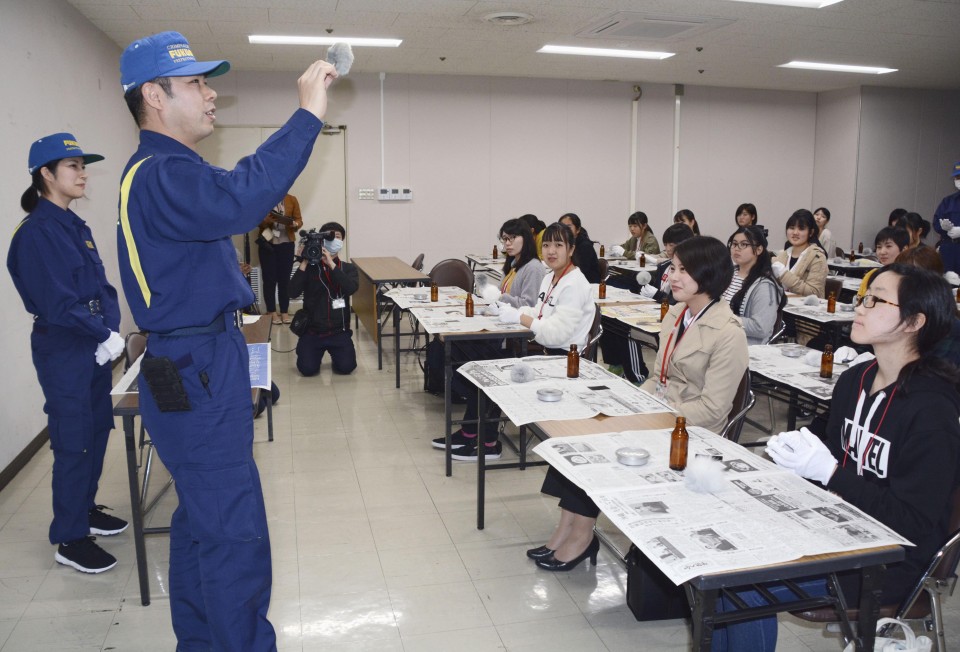 The Fukuoka police force loosened the overall height and weight requirements in fiscal 2016 after the National Police Agency's orders in February 2011 to come up with measures to increase the ratio of female officers. In fiscal 2016, the Fukuoka police hired 60 women, up from the usual 40 to 50.

Despite these efforts, however, the percentage of female recruits by the Fukuoka police was the lowest in the country in fiscal 2017 and 2018 at 6.9 and 7.3 percent, respectively, compared to the national average of around 9 percent.

Local police sources say that the Fukuoka police were dealing with a string of attacks and crimes connected to gangsters in the past and could not allocate sufficient manpower to recruitment efforts.

Starting in fiscal 2019 from April, the Fukuoka police will increase female-only facilities, such as napping and changing rooms, in an attempt to improve working conditions as they endeavor to increase the ratio of female officers to 10 percent by fiscal 2023.

They also plan to utilize Youtube videos and social media services to promote female recruitment, alongside the distribution of pamphlets introducing police work and the benefits on offer, such as maternity leave.

A mother of three, 39-year-old sergeant Yoko Isono hopes the efforts will lead to an increase in female recruits.

"There are crimes, such as those of a sexual nature, which could be better dealt with by a female police officer," she said.