Two knives were found at the classroom desk of Prince Hisahito, the 12-year-old grandson of Emperor Akihito, with security camera footage showing a man had trespassed on the grounds of his Tokyo junior high school, police said Saturday.

The footage shows a helmeted middle-aged man clad in blue entering Ochanomizu University Junior High School on Friday around noon, according to the police, who believe he entered the building disguised as a construction worker.

Prince Hisahito, who began attending the school this month after graduating from the national university's elementary school on the same campus, was attending classes outdoors at the time and the classroom was empty when the two knives were left there.

The discovery of the knives -- thought to be fruit knives -- in the afternoon of Friday was reported by the school to the police.

The incident occurred ahead of next week's imperial succession which will promote the young prince to second in line to the Chrysanthemum Throne following the abdication of his 85-year-old grandfather, Emperor Akihito, on Tuesday and the enthronement of Crown Prince Naruhito the following day.

Prince Fumihito, father of Prince Hisahito, will be first in the line after the succession.

Each desk in the classroom bears a piece of a tape with a student's name on it, which may have led to identifying where the prince sits, according to investigative sources. 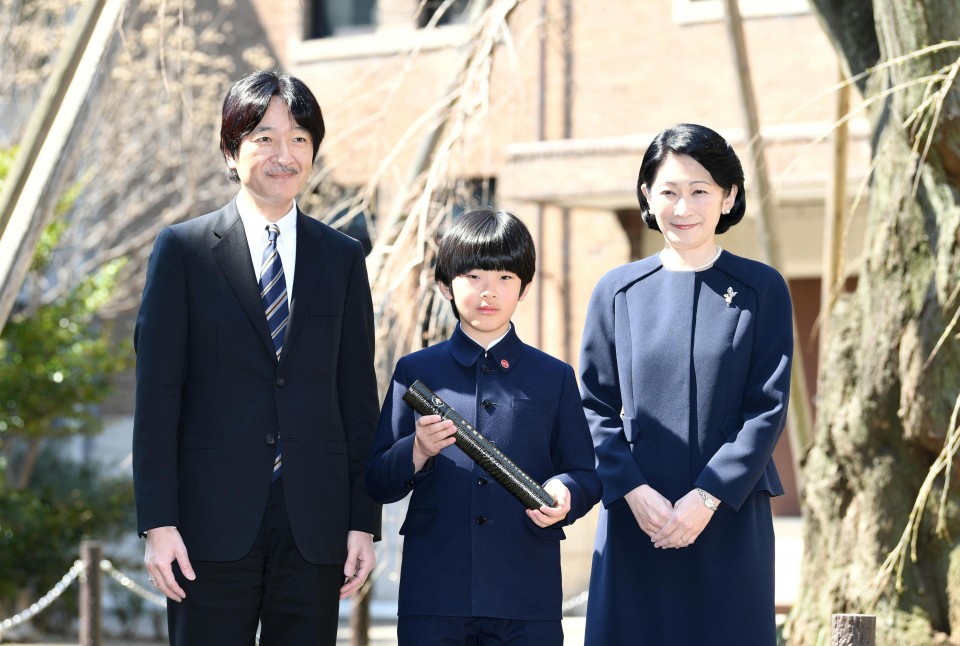 (Prince Hisahito, center, pictured with his father Prince Fumihito, left, and mother Princess Kiko after a graduation ceremony at an elementary school affiliated with Ochanomizu University in Tokyo on March 15, 2019.)

The hilts of the knives were attached by adhesive tape to a stick, the sources said, and the combination was placed across the prince's desk and the one next to it.

The blades of the knives were painted pink, they added.

Whenever Prince Hisahito leaves his residence, he is guarded by police officers but at school they stand by on campus and do not accompany him inside buildings or his classrooms, according to an Imperial Household Agency official.

Students of the women's university, which is on the same campus, were surprised that the incident occurred despite tight security.

Guards at the premise's two main gates have always checked the identities of visitors and asked students to show their cards, according to a student attending its graduate school.

"I have never worried about safety. I can't believe such an incident happened," said the 23-year-old student.

"It is difficult for an outsider to freely enter the campus," a senior student at the university also said.