Former Nissan Motor Co. Chairman Carlos Ghosn was released Thursday on bail, after he was indicted for the fourth time at the start of the week over alleged misuse of company funds, under stricter conditions that include being banned from contact with his wife without court approval.

Ghosn, with a tight expression on his face left a detention facility with his lawyer around 10:20 p.m., wearing a dark suit and not disguised as a worker like when he was first released in early March.

Ghosn wordlessly got in a waiting black Toyota van as a large press group numbering more than a hundred observed him, moving the next stage of his battle with prosecutors to the courtroom after possibly months of preparations.

In making the decision, the Tokyo District Court recognized it could not completely foreclose the possibility of concealment of evidence by granting him bail, a source familiar with the situation said. However, it apparently believed that detaining him longer would negatively impact his defense preparation and health.

Tokyo prosecutors have told the court that his wife Carole has contacted individuals related to the allegations. 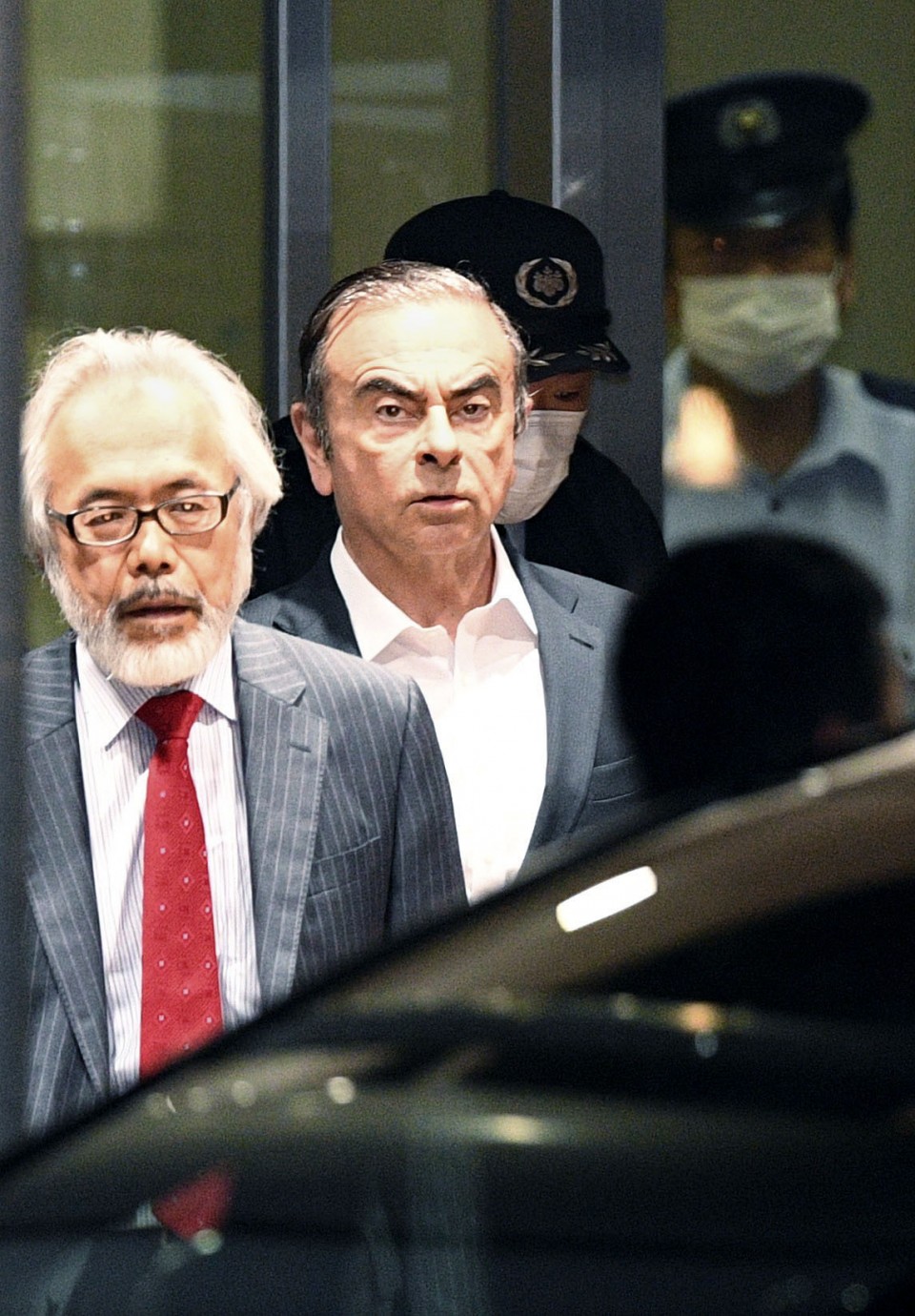 "Restricting communications and contact between my wife and me is cruel and unnecessary," Ghosn said in a statement. "We love each other very much, she answered all of the prosecutors' questions in court, and she has done nothing wrong."

He also reasserted his innocence and his commitment to vigorously defend himself against "these meritless and unsubstantiated accusations."

Ghosn has already made the 500 million yen ($4.5 million) bail payment. The prosecutors appealed the court decision but their appeal was rejected, paving the way for his release from the Tokyo Detention House hours later.

He later entered a Tokyo hotel, instead of the designated apartment where he lived with his wife during the previous release.

Following his initial arrest in mid-November over allegations of underreporting his remuneration, the ousted chairman was released in early March on 1 billion yen bail. The 65-year-old was then rearrested on April 4.

The bail conditions set by the court again require that he remain in Japan, said a source knowledgeable on the matter.

The prosecutors have told the court that they are concerned about concealment of evidence.

Ghosn has denied all the allegations against him.

Ghosn's first release was conditional on 15 stipulations such as not contacting people related to the allegations including Nissan executives, having a security camera installed at the entrance of his residence in Tokyo and restricted use of mobile phones and computers.

Ghosn's defense lawyer, Junichiro Hironaka, said he is "glad" his client was released, adding there was some concern as the prosecutors were "extremely opposed" to it.

The Ghosn case has drawn international attention to Japan's criminal justice system, which some have called "hostage justice." Critics say the system enables authorities to hold alleged offenders in difficult conditions for long periods of time in hopes of soliciting an admission of guilt.

After his first arrest, Ghosn was repeatedly denied bail and, as is common in Japan, was not permitted to be accompanied by a lawyer while being interrogated.

Critics also say the practice of prolonging detention by incrementally adding charges enables suspects to be denied the chance to file for bail. Ghosn was released on bail of 1 billion yen on March 6 after more than 100 days in detention.

In the latest indictment, Ghosn is accused of having a Nissan subsidiary in the United Arab Emirates pay a total of $10 million to a distributor in Oman between July 2017 and last July, and having $5 million of that transferred to a savings account at a Lebanese investment firm that Ghosn effectively owns.

Sources close to the case have said it is alleged that part of the money was then channeled to the company of Ghosn's wife, where a portion may have gone toward the purchase of a luxury yacht worth 1.6 billion yen mainly for use by the family.

Ghosn is already preparing to defend himself against charges that he violated the financial instruments law by underreporting his remuneration by 9.1 billion yen in Nissan's securities reports presented to Japanese regulators over the eight years through March last year.

He has also been indicted over a separate aggravated breach of trust in relation to the alleged transfer of private investment losses to Nissan's books in 2008 and for paying $14.7 million in company funds to a Saudi businessman who extended credit to him.

Nissan said Monday it had filed a criminal complaint against Ghosn over the latest allegation, saying in a statement the payments to the Omani distributor were directed by Ghosn not for business but for personal purposes.

Ghosn was removed from the chairmanship posts at Nissan and its partners Renault SA and Mitsubishi Motors Corp. after his first arrest on Nov. 19. He has also been replaced as CEO of Renault.

He said in a video message recorded shortly before his last arrest that he was the victim of a "conspiracy" by Nissan executives who felt that a possible convergence or merger with Renault would threaten Nissan's autonomy.

Ghosn has remained silent during questioning by the prosecutors, according to his defense team.