Japan on Monday marked the eighth anniversary of the devastating earthquake and tsunami in northeastern Japan that left more than 15,000 people dead and triggered the world's worst nuclear disaster since the 1986 Chernobyl crisis.

As rain and strong winds hit coastal areas in the region, people attended memorial ceremonies and offered prayers for the victims of the magnitude 9.0 quake and ensuing tsunami on March 11, 2011.

"I can still vividly recall the harrowing scene after all these years," said 63-year-old Seiichi Watanabe at a park on the hill that he fled to in Ishinomaki, Miyagi Prefecture, after his home was washed away by the tsunami. 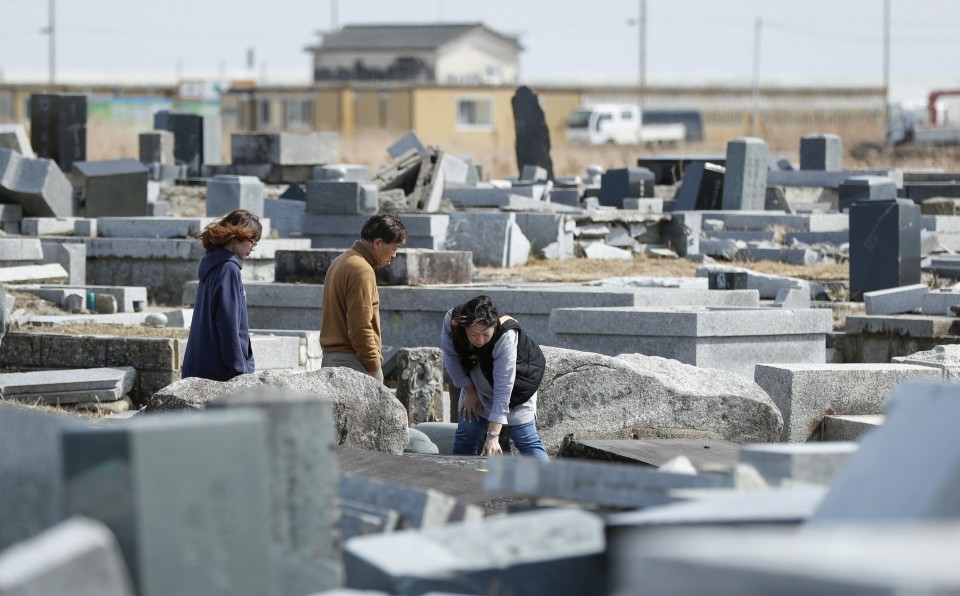 (People visit their relatives' grave in Namie, Fukushima Prefecture, a town hit hard by the massive 2011 earthquake and tsunami disaster in northeastern Japan, on March 10, 2019, a day before the disaster's eighth anniversary.)

In a government-sponsored memorial ceremony at the National Theatre in Tokyo, a moment of silence was observed at 2:46 p.m., the time of day when the quake occurred.

Prime Minister Shinzo Abe pledged continued support for the afflicted, saying the government "will continue to undertake reconstruction work with a commitment to providing seamless support through the various stages of livelihood rehabilitation and further accelerate the reconstruction work."

"I am deeply concerned for the physical and mental health of the afflicted people, especially the elderly, who become more vulnerable year by year," said Prince Fumihito, the younger son of Emperor Akihito, who also took part in the ceremony.

While the number of displaced has dropped from its peak of 470,000, about 52,000 people have yet to return to their hometowns since the disaster. 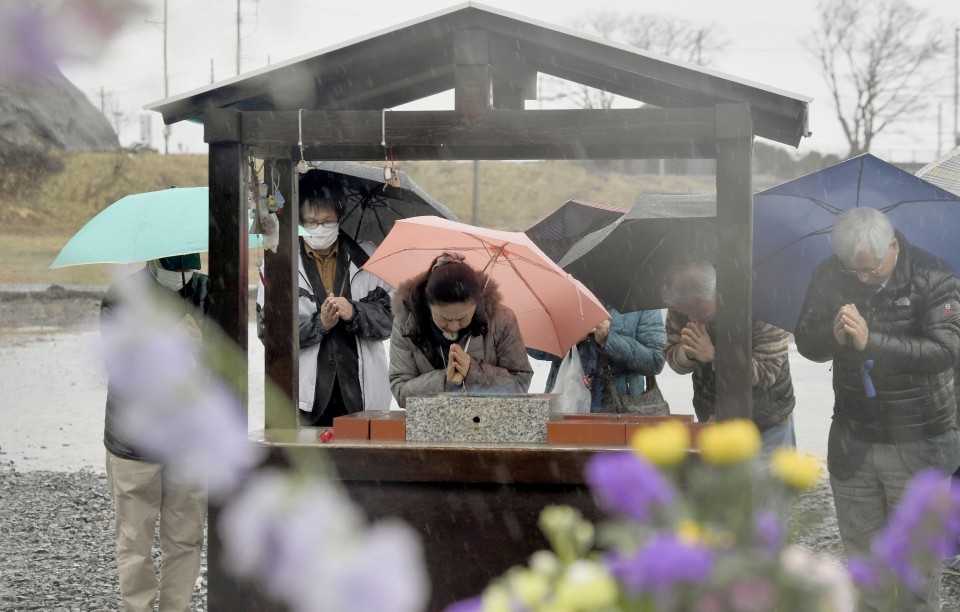 (People pray at the former site of Okawa Elementary School in Ishinomaki, Miyagi Prefecture, on March 11, 2019, the eighth anniversary of the 2011 earthquake-tsunami disaster in northeastern Japan. A total of 74 students and 10 teachers and officials from the school died when it was engulfed by a tsunami.)

As of Friday, the disasters had left 15,897 people dead and 2,533 unaccounted for, mostly in the prefectures of Iwate, Miyagi and Fukushima, according to the National Police Agency.

Ayumi Kakuhari, 33, who lost her brother Tomoyuki Kanno, 20, in the tsunami in Rikuzentakata, Iwate Prefecture, prayed before his grave in the rain.

"I still feel like he is going to suddenly show up one day," she said.

The Miyagi police had been scheduled to search for the remains of the missing in the coastal areas but terminated the plan due to poor weather. Officers in Fukushima and at most Iwate police stations went ahead with their search plans.

In the 2011 disaster, tsunami as high as 15 meters engulfed the six-reactor Fukushima Daiichi nuclear power plant located on the Pacific coast, causing core meltdowns and hydrogen explosions in the following days.

Evacuation orders, issued after the plant spewed a massive amount of radioactive materials, have been lifted in many parts of Fukushima Prefecture with the progress of decontamination work, but the stigma of radiation contamination continues to attach to local food products although it has gradually lessened over the years. 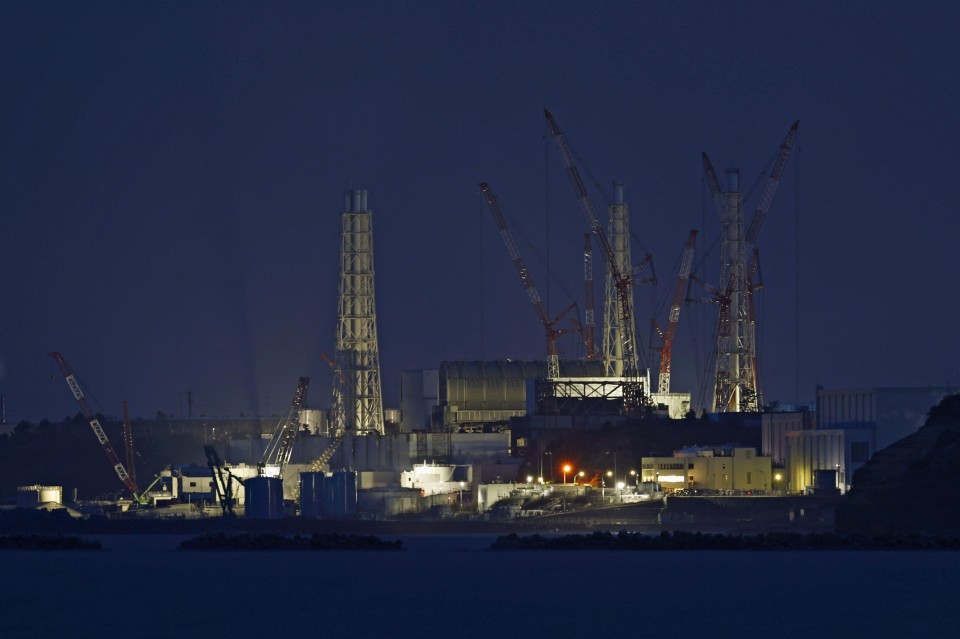 (Photo taken March 10, 2019, from Namie, Fukushima Prefecture, shows the Fukushima Daiichi nuclear power plant, which was struck by the 2011 earthquake-tsunami disaster in northeastern Japan and is in the process of being decommissioned.)

"The rebuilding and revival of Fukushima is a top priority agenda," said Yoshiaki Harada, minister for nuclear emergency preparedness, noting people are still unable to return to areas around the crippled power plant due to high levels of radiation.

The town of Okuma, which hosts part of the Fukushima plant, is expecting to have an evacuation order lifted for some parts of the town in April. At present, all of its residents remain evacuated.

In Kamaishi, Iwate Prefecture, a memorial ceremony was held for more than 160 people killed in the tsunami after taking refuge at a facility in the city's Usunomai district. The place was not designated as a tsunami shelter, but anti-disaster drills had been held there before.

A cenotaph inscribed with messages for people to flee and not return in the event of a disaster was unveiled during the event.

The government is scheduled to disband the Reconstruction Agency, established seven years ago as the central control point for efforts to rebuild from the triple disasters, in March 2021. 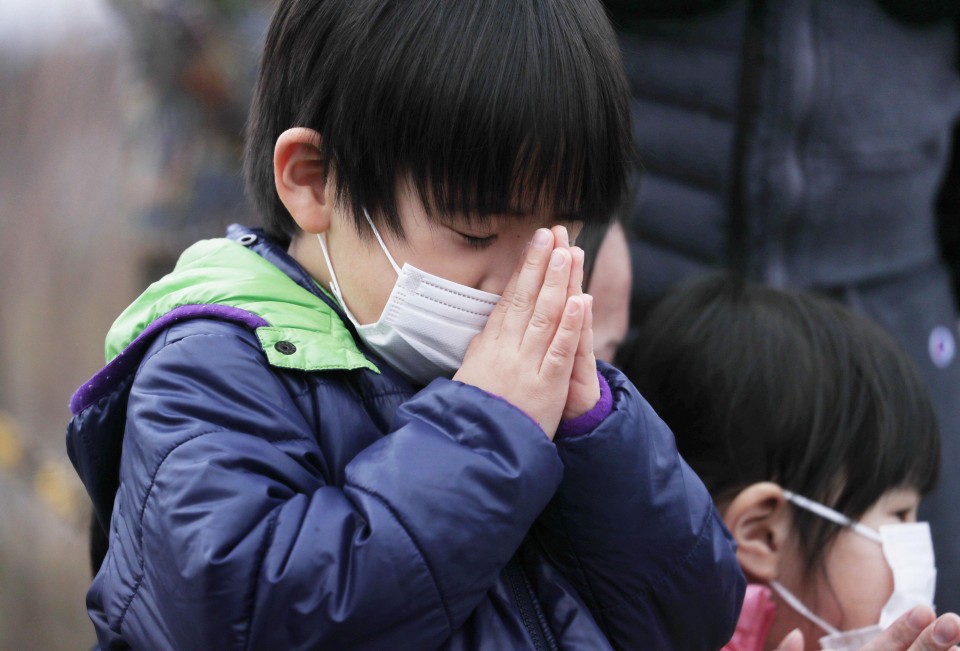 But after deeming the affected people still need support, it has decided to effectively carry on the same work under a new entity it plans to create at the Cabinet Office.

Some 1,300 people in the hardest-hit prefectures are expected to continue living in temporary housing due to delays in construction of replacement housing, financial problems and other reasons, a Kyodo News survey found.

According to the decommissioning road map, the utility and the Japanese government will decide within the next fiscal year starting this April in which order and how to extract fuel, under extremely high radiation levels, from the three reactors that suffered core meltdowns. The actual removal is expected to start in 2021.

TEPCO has been making attempts to examine the damaged reactors and said last month that a remotely-controlled probe found that fuel debris inside one of the reactors can be lifted.