There is growing interest among foreign tourists for a tour in English to former evacuation zones in the northeastern Japan prefecture of Fukushima where a devastating earthquake and tsunami in March 2011 triggered a nuclear disaster.

"More people are becoming interested in going on the tour that can deepen their knowledge," explains an official at the Japan National Tourism Organization.

At 8 a.m. on a frigid morning in January, foreign tourists gathered in front of Tokyo Station and boarded a station wagon headed to Fukushima Prefecture.

"It's surprisingly close from Tokyo." "Are nuclear power plants in Japan active?" Questions and thoughts flew around in various languages.

When personal dosimeters used to record the level of radiation were handed out, Nerious Bartkus, a 28-year-old office worker from Lithuania, pushed the operating buttons uncertainly.

"I am interested in the Chernobyl nuclear accident during the Soviet era and I wanted to visit Fukushima," he said.

The tourism company Knot World Co. based in Tokyo designed this particular tour from a desire to encourage more people to "hear the local voices and see the area's damage and recovery" after the nuclear accident at the Fukushima Daiichi power plant. 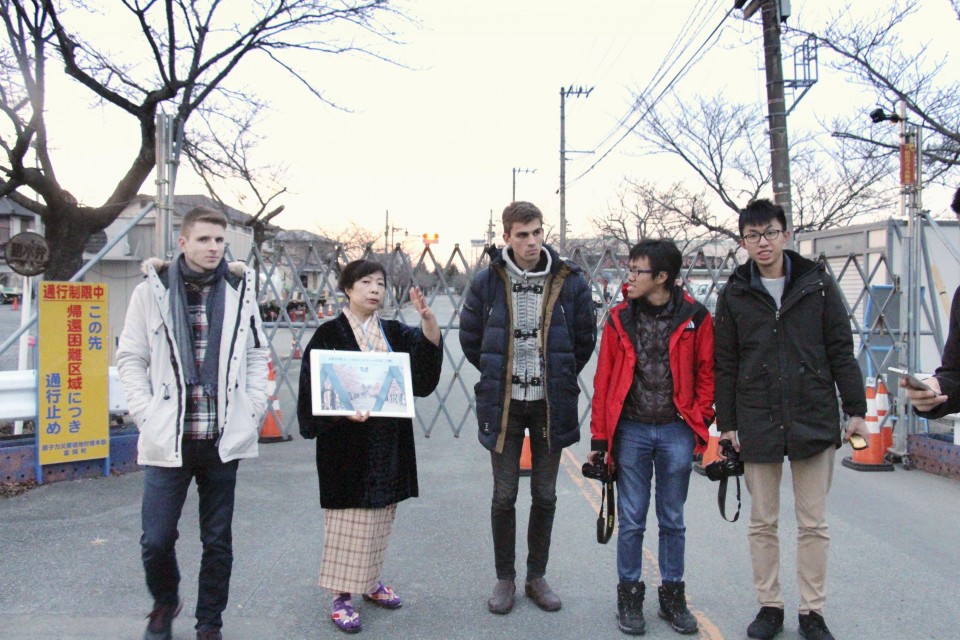 Since the tour's launch in February last year, some 200 people from 23 countries have participated, according to the company.

At 11 a.m. the tourists arrived at the first stop of their tour, in the town of Namie.

"We are worried that accidents may occur at nuclear plants in China," said a Hong Kong student accompanied by two others.

The three visited a temporary shopping district set up after the accident and ordered curry dishes that used local vegetables. "We aren't bothered as long as inspections on radioactivity are conducted," one smiled.

Scenes that reminded of the crisis greeted the tourists. An elementary school hit by the tsunami. A farm that continues to take care of their cows despite having been exposed to the radiation. A brand-new seawall.

The tourists paid their respects in front of a memorial commemorating the victims. As they passed through a hazardous zone in their vehicle, they could see far in the distance the nuclear plant's exhaust pipes and cranes. The dosimeters started to make a noise when it measured more than 1 microsievert per hour, causing some people to look serious.

At dusk, they walked along a street lined with cherry trees in the town of Tomioka. "I want to go back to my town," a woman who has evacuated the town told the tourists. "But it's not easy."

It was half past 8 p.m. when the tourists arrived back to Tokyo's bright lights. "I have a better understanding of the residents' feelings," said Pak Hin Law, a 19-year-old student from Hong Kong.

Fukushima Prefecture says 96,000 foreign tourists stayed at hotels and inns in the prefecture in 2017, which is four times the number in 2011. In February this year, an organization that promotes the prefecture's products and tourism launched a three-day tour with English translation in areas including Naraha, another town in the vicinity of the crippled nuclear plant, to aid recovery.

However, there are numerous issues that need to be resolved regarding tours catering to foreigners such as training tour guides and providing information in various languages.

Various thoughts are voiced in Fukushima Prefecture such as, "We would really like the tourists to come not out of casual interest but to truly learn the issue," and, "Please also turn your attention to the fact that our lives before the accident has not returned," local officials said.

The Fukushima Daiichi plant spewed a massive amount of radioactive materials following the magnitude 9.0 earthquake and tsunami that flooded the facility on March 11, 2011.

Following the crisis, which equaled the severity of the 1986 Chernobyl disaster, some 160,000 people were evacuated at one point and over 32,000 people remained evacuated in other prefectures as of January this year.