From pest to profit: Aussie sea urchins exported to Japan

Australia's southeastern island of Tasmania has long been renowned for producing some of the country's tastiest seafood.

But when warming seas allowed a foreign species of sea urchin to move farther south, devastating valuable fisheries, local businesses had to innovate and fostered a new industry whose products are popular overseas, including in Japan. 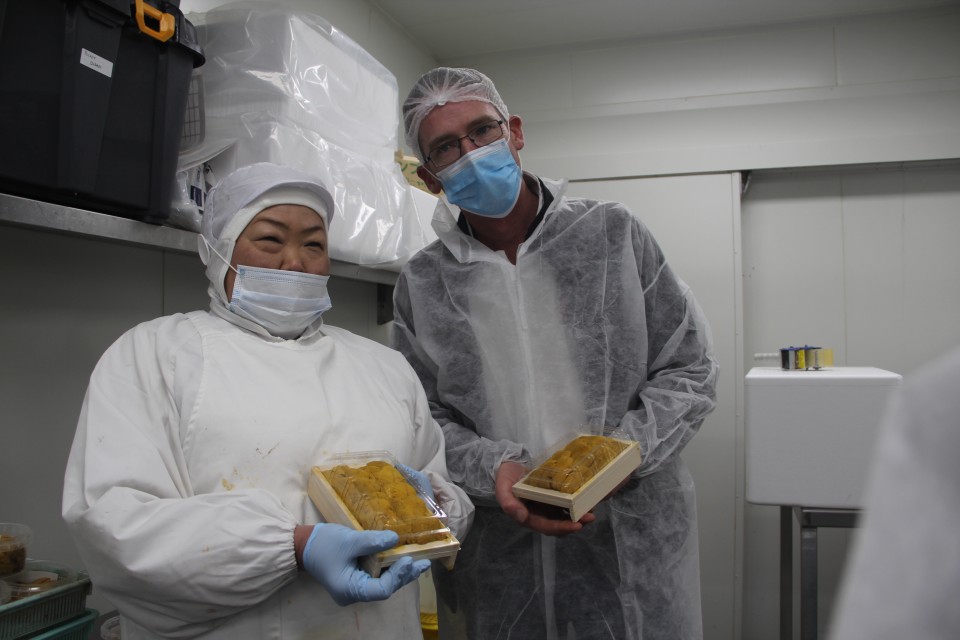 Located about half-an-hour south of the state capital Hobart, Ralph's Tasmanian Seafood began processing sea urchin in 2017 as an "experiment" when it saw wild abalone stocks in decline due to the plague-like numbers of long-spined sea urchin.

The company, which has historically exported wild-caught abalone, is now the only exporter of Tasmanian long-spined sea urchin roe.

"Over the past 15 years, populations of long-spined sea urchins have started to destroy the environment up and down the east coast of Tasmania. That's impacted not only the abalone industry but also the rock lobster industry as well," said sea urchin processing manager Simon Leonard.

Now running at full capacity, Ralph's Tasmanian Seafood processes between 15-20 tons of sea urchin a week, which is then sold to buyers in Japan, the United States, Malaysia, Singapore and Hong Kong, as well as domestically at the Sydney fish markets and to high-end restaurants.

"Basically, we see it as an opportunity to not only do something to help the environment, but also turn a pest into profit," 38-year-old Leonard said.

Long-spined sea urchins -- not to be confused with the short-spined variety, which is native to Tasmania -- have been brought south to Tasmania from the Australian mainland along the East Australian Current.

"Over the last 40 years our winter water temperatures have gone up a couple of degrees and it's passed the threshold where the (sea urchin) larvae develop, which is 12 degrees (C)," John Keane from the University of Tasmania's Institute for Marine and Antarctic Studies, said.

The research fellow explained that Tasmanian water temperatures have risen from 11 to 13 C over the decades, creating temperature conditions where larvae are able to develop into adult sea urchins. 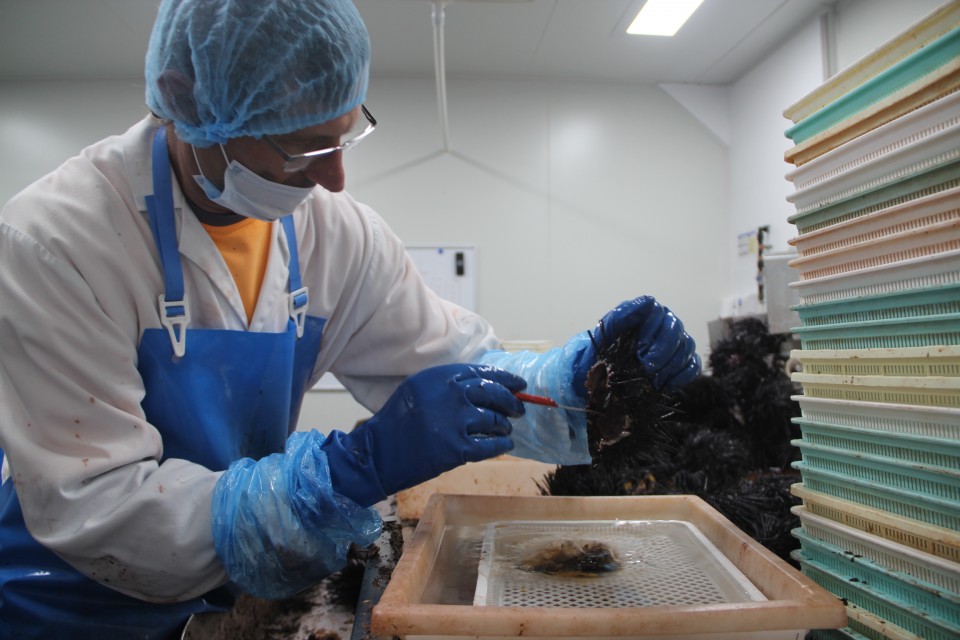 (A worker at Ralph's Tasmanian Seafood separates sea urchin roe and innards at the processing facility in Electrona.)

Keane said the long-spined sea urchin was first sighted in Tasmania in 1978, but started to have a severe impact on local ecosystems from 15 years ago.

As of December, he said there are an estimated 18 million long-spined sea urchins in Tasmania.

In large numbers, the urchins graze on kelp, turning healthy reef ecosystems into "barrens" or large areas of rock stripped of vegetation and wildlife.

"Now on the east coast of Tasmania, 15 percent of our reefs are sea urchin barren and that is increasing," he said.

However, as urchin roe is not a regular ingredient on Australian dinner plates, Ralph's Tasmanian Seafood has focused its efforts on exports; particularly on breaking into the Japanese market, where sea urchin roe is a popular delicacy at sushi bars.

In order to meet Japan's high standards for product presentation, the company hired an urchin roe technician from Japan to teach local staff how to select and pack the product.

Affectionately called "Big Mumma" by her Australian co-workers, 42-year-old Nobuko Honzana has 24 years of experience in the industry and leads a 12-person packing team.

Tokyo-based importer Jian Wen Bao said she is impressed with the flavor and quality of Tasmanian sea urchin.

"It's delicious," the president of Shinkou Trading said on her first visit to the processing factory.

"It has a strong flavor and there is a good amount of fat," she said, comparing the flavor to Japanese murasaki uni.

Once in Japan, the Tasmanian product is sold at the newly established Toyosu fish market in Tokyo, where it is primarily bought by operators of conveyer-belt sushi restaurants.

Toyosu recently replaced the famous but aging Tsukiji fish market in the capital.

However, staff at Ralph's Tasmanian Seafood admit they have a long way to go before they can say they have a comfortable foothold in the Japanese market.

"Our understanding of where it is being consumed in Japan and why it's being consumed is still lacking," said David Hogg, chairman of RTS Pauaco, parent company of Ralph's Tasmanian Seafood.

"Today we could move all of our stock to China without any problem, but the key value driver for this industry will always be the Tsukiji fresh market, and that is where we have to establish our credentials," he said.

"You don't do that overnight with a bunch of people who are used to processing abalone."

Hogg admits a culture change is required for Australian workers to understand and accept Japanese market standards, but he's confident that Tasmanian sea urchin will one day be a "very high value product, only going to high value markets."

In the meantime, Leonard's message to consumers is simple.

"Eat up! We enjoy producing it, and we want to continue to produce it to enable the sustainability of our fisheries."