Japanese Buddhist out to educate West on swastika of good fortune

When monk Rev. Kenjitsu Nakagaki was honoring Buddha's birthday with a sacred flower ceremony at a shrine in Seattle in 1986, he was met with sharp criticism for the chrysanthemums he arranged in the shape of a counterclockwise swastika.

Nakagaki, then 25, who moved to Seattle from Osaka, Japan, for his first mission the previous year, was unaware neo-Nazis and white supremacists continued to use the Nazi swastika to promote hate. He knew the symbol as "manji," a Chinese character that means "good fortune" in the Japanese language.

"You can't do that in this country," Nakagaki recounted a devoted temple member's words in telling him to remove from the roof of the flower shrine a symbol that is a racial epithet in the United States and Europe.

"After I got that lesson, I decided not to use that particular symbol -- for the past 25 years."

But such episodes in which Nakagaki felt Buddhism was being marginalized piled up. And at a 2009 interfaith workshop, where a hate crimes expert called the swastika "a universal symbol of hate and evil," he made the decision to preserve the emblem's original meaning.

"This narrow and limited perspective is unacceptable for those of us who value and have grown up with the swastika in our religions and culture," said the 57-year-old. 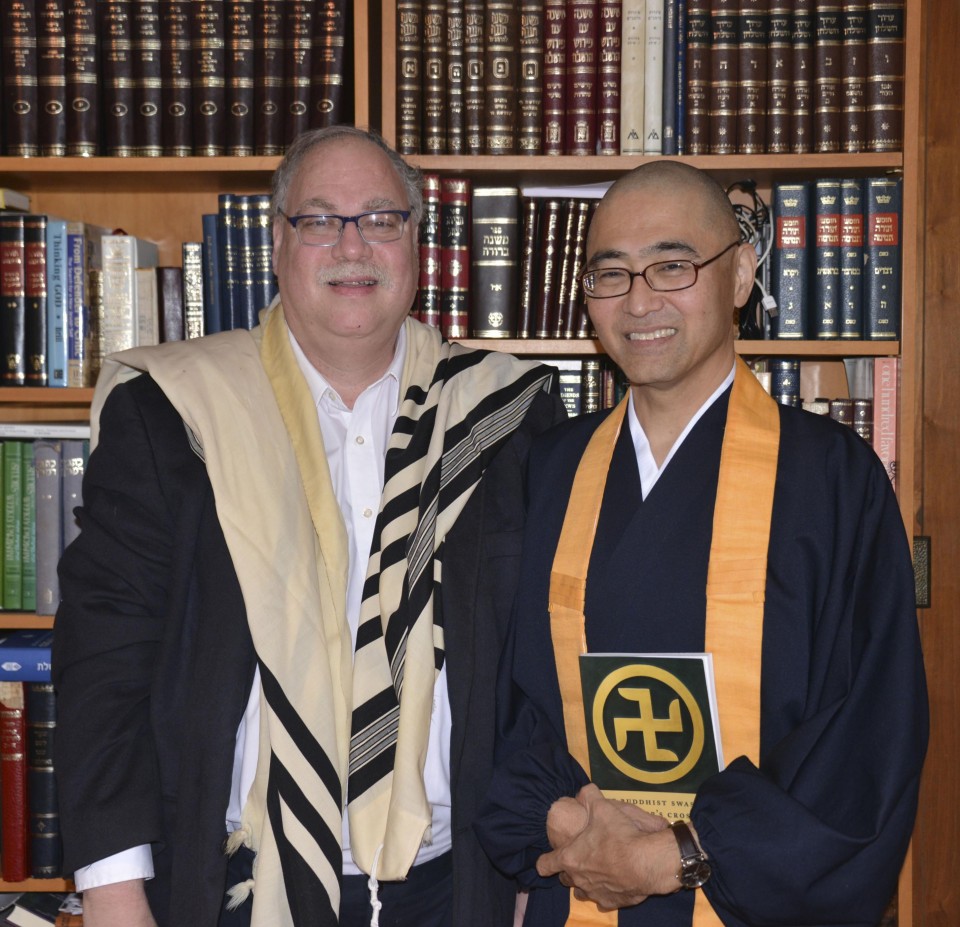 Now Nakagaki, a prominent Buddhist reverend in New York City, has ended his decades-long personal prohibition of the word with his new book "The Buddhist Swastika and Hitler's Cross," aiming to educate the Western world about the symbol's Eastern roots.

The book details the swastika's Sanskrit origins, then delves into its use in Hinduism, Buddhism, Jainism, Judaism, Christianity, and Islam, predating by centuries Hitler's Nazi propagation of the symbol.

Though the swastika comes in many orientations -- some have dots, swirls, etc. -- depending on the respective religion and culture, the Buddhism standard version stands square on its facade with left-turning arms, while Hitler's was right-turning on a 45-degree angle.

The book, a continuation of Nakagaki's 2012 interfaith dissertation at the New York Theological Seminary, was first published in Japan in 2013 when American publishing houses were reluctant to print it.

Determined to reach English readers, in 2017, he self-published the book on Amazon in a rebuttal to the influx of news articles on anti-Semitism. The book was republished with Stone Bridge Press in September 2018.

"When (U.S. President Donald) Trump came up, so did all the hate crimes as well," said Nakagaki to Kyodo News. "If I don't say it now then more misunderstanding will spread."

But Nakagaki's appeal to the West that the swastika is also peaceful clashes with the beliefs of the Jewish community, which lost six million lives in the Holocaust and is now on alert as it has endured a rise in anti-Semitic incidents over the last three years.

In an interfaith discussion last month, Rabbi Alan Brill, chair of Jewish Christian Studies at Seton Hall University in New Jersey, commended Nakagaki for detailing the differences between the two symbols, but emphasized that people in the West "can't tell the difference" because "they never have been educated to the difference."

"The word is misused entirely but that is now the English word for all those designs," said Brill. "In the end, it is still being used as a hate symbol in America. It is not a historic symbol, it is something being used right now."

During the discussion, Brill added that the symbol is not exclusive to the eastern countries and can even be found in the ancient Ein Gedi synagogue in Israel, Greco-Roman Architecture and New York City subway station designs from the 1920s.

While the swastika is taboo in the United States and Europe, it has been a part of Japan's culture since the introduction of Buddhism about 1,500 years ago, and was "standardized as a temple marker on maps" during the Meiji era (1868-1912) and is still used today, Nakagaki said.

With the 2020 Tokyo Olympics approaching, Nakagaki hopes tourists will educate themselves about the Buddhist swastika, as they are bound to see them -- on train maps, clothing and household items -- while in Japan.

"Tourists and even athletes who are coming shouldn't be alarmed when they see an ancient symbol as part of temples and architecture," said Cooper in a phone interview.

"Every effort to educate people on both sides, in Asia and elsewhere around the world, is a positive thing."