Having disregarded a state instruction to kill cattle left behind in areas near the crisis-hit Fukushima Daiichi nuclear plant, some local farmers have been struggling to keep about 430 cows within a 20-kilometers radius of the complex exposed to radiation.

The instruction was issued two months after fuel meltdowns at the plant in northeastern Japan were triggered by a massive earthquake and a tsunami on March 11, 2011, for about 3,500 cows kept within the area adjacent to the Fukushima Daiichi complex.

Regarding their cows as "family members," some farmers ignored the instruction, while others who followed it say they still suffer psychologically. The central government allowed cattle breeding in the 20-km zone in 2012, but shipments are still banned.

Keiji Okada, a professor of veterinary science at Iwate University and a researcher of animals exposed to radiation, has been taking blood and urine samples from cows at a couple of farms in the zone to see if there are any genetic abnormalities in them. 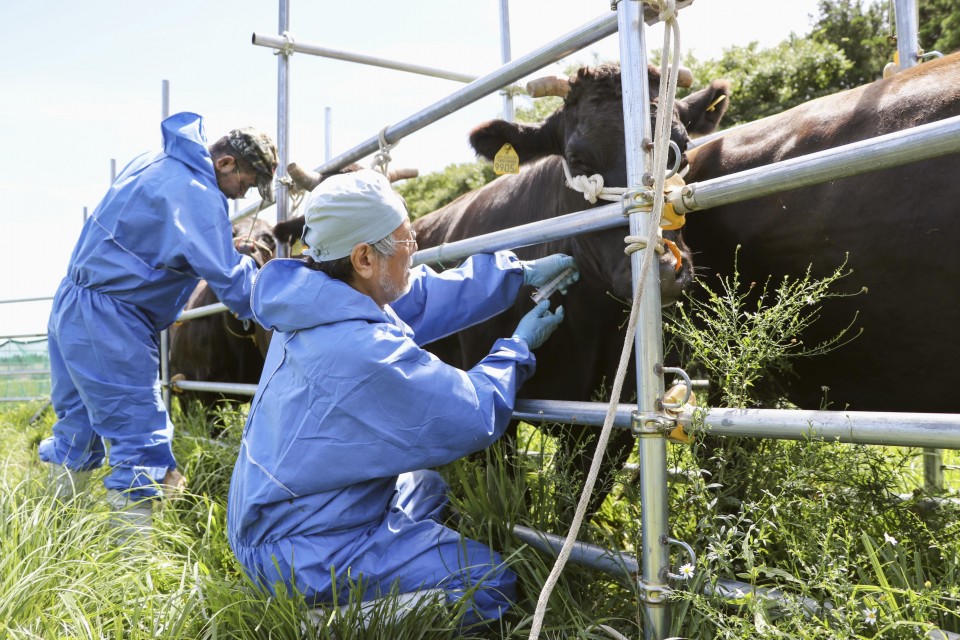 (Photo taken on Aug. 18, 2018 shows Iwate University professor Keiji Okada, front, taking a blood sample from a cow at a farm in an area designated by the Japanese government as an evacuation zone in Namie)

One farmer who is cooperating with the research is Fumikazu Watanabe, a 60-year-old local cattle farmer, in the town of Namie, several kilometers from the Fukushima plant.

Watanabe said he wants to protect his 50 cows "until they die a natural death just like human parents protect their children."

Before returning to Namie in October last year after evacuation orders for some parts of the town were lifted, Watanabe used to shuttle between the farm and his shelter, which was about 50 km away, by applying for special entry permission to take care of his cows.

Radiation levels at Watanabe's farm stand at 15 to 20 microsieverts per hour, the highest among the seven farms where the 430 cows are kept, but his cows are "so far in perfect health," Okada said.

"This research is internationally rare and it could be applied to protecting cattle when a nuclear disaster occurs," he said.

Another farm dubbed "Moo Mow Garden" in the town of Okuma, where the Fukushima plant is sited, is run by Satsuki Tani, 36, who initially worked as a volunteer following the disaster. Eleven cows are still kept at the 6-hectare facility in the community that became a ghost town.

Tani, a former company worker in Tokyo, originally came to Fukushima to protect stray cows after seeing news about cattle starved to death in the disaster-hit areas. She came up with the idea of having the cows, which eat 60 kilograms of grass every day, help to manage and conserve desolate farmland.

The cows released at the farm not only ate the weeds but knocked down a 3-meter-tall scrub and ate its leaves, transforming the deserted farm into a tidy field.

"I was always depressed to see the ruined farm every time I came back for a temporary stay, but now I feel better," said the farm's landlady in her 70s.

Tani, who now works part-time at a convenience store to make her living, said she aims to make a business out of her farm project. "I want to maintain the farmland so residents returning to the town in the future will be able to resume farming," she said. 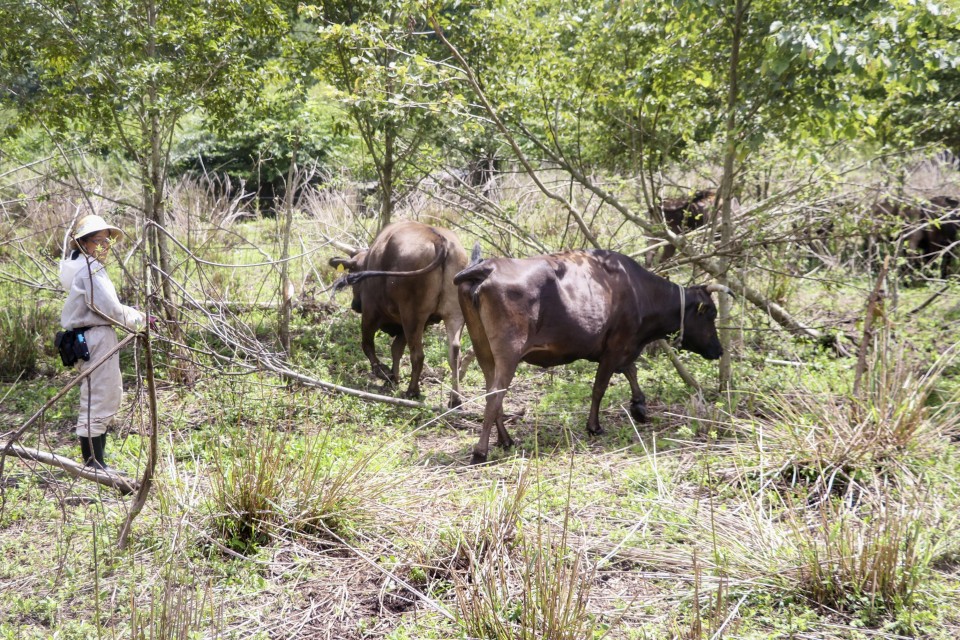 (Cattle farmer Satsuki Tani released the cows as part of her efforts to put the desolate field under proper management following the 2011 nuclear crisis.)

On the other hand, Kaiichi Shiba, 68, who agreed to abandon his 30 cows in 2013, has regretted his decision. It was tough for him to visit the farm exposed to high levels of radiation from his shelter.

"Yasuhira, Haruka -- each of them had a name. It's like I've killed my family," Shiba said of his cows. "If I could have moved them to a safer place, they would have lived." But it was impossible because the government prohibited evacuation of the cows outside the 20-km radius to prevent their meat from being marketed.

Shiba, who has evacuated from Namie to the city of Sayama in Saitama Prefecture, about 200 km away from his hometown, said he has yet to find a new motivation in life.