Japan may accept up to 60,000 foreign workers in nursing care sector

Japan's nursing care businesses are expected to accept up to 60,000 foreign workers over five years, the highest number among 14 industrial sectors facing labor shortages that will be subject to proposed changes of the immigration law, the government said Wednesday.

Disclosing a number of estimates to the ruling and opposition parties, which have just begun deliberations on a bill to revise the law, the government also said up to 47,550 foreign workers could enter the country in the first year, possibly starting next April, and 345,150 workers over five years.

In a major policy shift for Japan, the bill would create new visa statuses to accept blue-collar foreign workers in sectors deemed seriously short of labor, ranging from construction and farming to nursing care. The program may also pave the way for them to live permanently in Japan.

By sector, nursing care is expected to accept the largest number of up to 60,000 workers in the five-year period, food services up to 53,000 workers and construction about 40,000.

The other sectors covered by the program are industrial machinery, electronics, shipbuilding, auto maintenance, components production, airlines, accommodation, fishing as well as food and beverage production.

The government announced the official estimates after being grilled by opposition parties for pushing ahead with passage of the bill without disclosing details of the new system.

The government and the ruling parties aim to pass the bill during the ongoing extraordinary Diet session though Dec. 10.

Japan has so far mainly accepted highly skilled professionals in such fields as medicine and law, while taking in only a tiny number of refugees. But it is now in need of more foreign workers due to a rapidly aging population and low birthrate.

According to the estimates, the country's labor market is now short of 586,400 people and will face a shortfall of about 1.45 million in five years.

The government's plan to accept more foreign workers was largely welcomed by the 14 industries, but some experts doubt if enough skilled laborers from abroad would wish to work in those sectors.

"I am concerned about whether foreign workers with technical skills will really come to Japan to achieve the government's target of welcoming 345,150 workers in five years," said Makoto Kato, a researcher at Mitsubishi UFJ Research and Consulting Co. 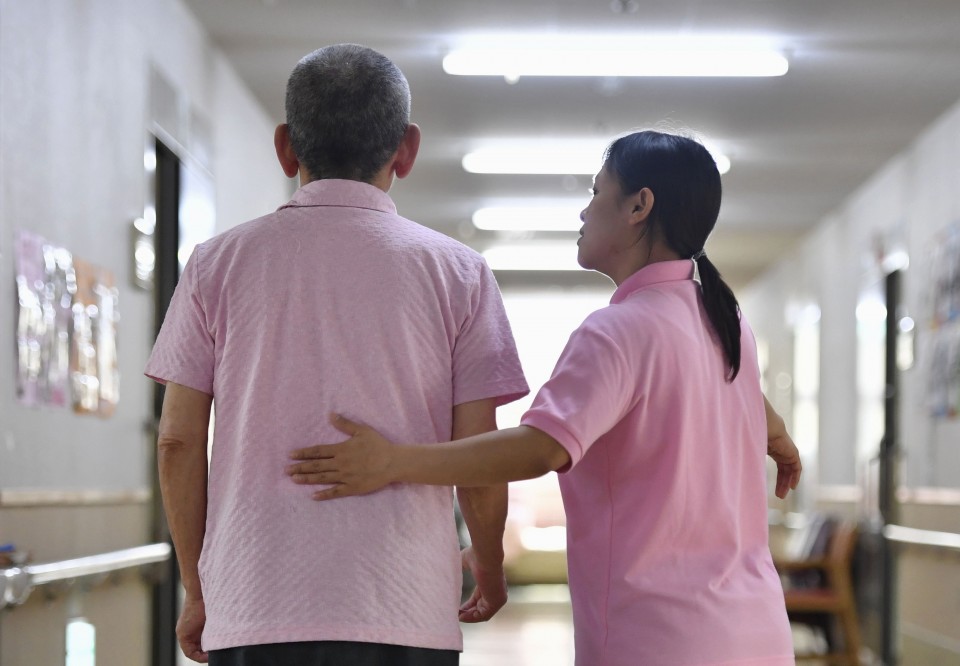 (Photo taken in May 2017 shows Nancy Nortanti from Indonesia attending to a resident at a nursing care facility in Tenri in Nara Prefecture, western Japan)

"Labor shortages in sectors such as nursing care, construction and food services in particular occur because of low wages and labor conditions, regardless of whether you are Japanese or foreign," he said. "It is necessary to implement other reforms such as increasing average wages within industries."

Under the envisioned system, two new types of residence status for non-Japanese workers are expected to be created.

The first type, valid for up to five years, will go to those with adequate knowledge and experience.

The second type will be for foreign nationals needed in fields requiring higher skills. The government does not plan to set a limit on the number of visa renewals and will allow family members to accompany the workers, opening up the possibility for such people to live permanently in Japan.

The estimates unveiled Wednesday are only related to the first type of visa status. Chief Cabinet Secretary Yoshihide Suga said at a press conference that the second type of visa status will only affect the construction and shipbuilding sectors.