More than 40,000 people have flocked to see the world's largest calligraphy of popular Buddhist scripture the Heart Sutra, drawn by a calligrapher with Down's syndrome and displayed at a central Japan temple since last November.

The powerful calligraphy measuring 4 meters high and 16 meters wide by Shoko Kanazawa, a 33-year-old Tokyoite, features 276 characters running from the ceiling to the floor, with the ink characters drawn with care and strength.

"The calligraphy reveals her soul which is as pure as the Buddha's. I want as many people as possible to see it," said Koshi Kimiya, the 40-year-old chief priest at Ryoun-ji temple in Hamamatsu, Shizuoka Prefecture, which shows Kanazawa's work.

"(Looking at it) feels like one is being embraced by the sutra," says Kimiya.

Kanazawa finished the work in 2015 after holing herself up for a few days in Senyu-ji temple in Imabari in western Japan's Ehime Prefecture, to prepare for an exhibition celebrating her 30th birthday.

She ordered sheets of paper from China which were 4 meters high and 2 meters wide, which she then pasted together to form the gargantuan background.

Her 74-year-old mother Yasuko did not know what to do with the work after the exhibition because of its sheer size, but her family friend Kimiya was willing to take it.

Initially, Kimiya did not inquire about the calligraphy's size when he offered to accept it. It was only after the work was exhibited in Matsuyama city in Ehime that he learned how large it was.

"Where should I put it?," he asked himself anxiously but he believed that the temple's role is "to spread the sincere thoughts with which she drew the sutra." 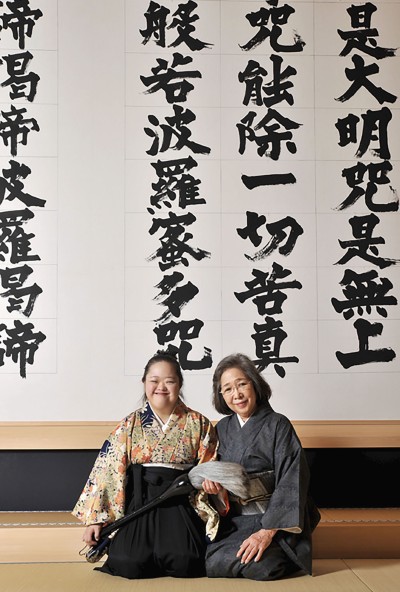 He decided to put it in the temple's nirvana hall, which was being built originally to preserve the ashes of the deceased, and the planned facility was more than doubled.

Determined that the hall must be 9 meters in depth without columns to be able to see Kanazawa's whole work, and that there should be empty spaces around the piece, Kimiya discussed with architects the design of the facility.

Kanazawa cried with tears of joy when she first saw her work in the hall after its completion.

In addition to the piece, which is on permanent display at Ryoun-ji, about 40 calligraphy works by Kanazawa will be shown to the public for free of charge at the temple from Nov. 21 to Dec. 3.

"I want people to look into their hearts as they stand in front of the calligraphy," said Kimiya. "If viewers' lives are saved, the work would be even more alive than it is."