Prime Minister Shinzo Abe invited his Indian counterpart Narendra Modi to his holiday home for dinner in a scenic resort by Mt. Fuji on Sunday as a token of gratitude for accommodating him in the Indian leader's home state last year.

Modi became the first foreign leader to visit Abe's holiday home in Yamanashi Prefecture, west of Tokyo, at his invitation as the Japanese prime minister apparently sought to demonstrate their close relationship.

At the entrance of a hotel at the foot of Mt. Fuji, Abe greeted and shook hands with Modi before a luncheon earlier in the day. The two leaders discussed regional issues including North Korea and agreed to cooperate in achieving the denuclearization of the Korean Peninsula, Japan's Foreign Ministry said.

Abe and Modi then visited a factory of industrial robot manufacturer Fanuc Corp. in Yamanashi before moving on to the prime minister's holiday home in the nearby village of Narusawa. 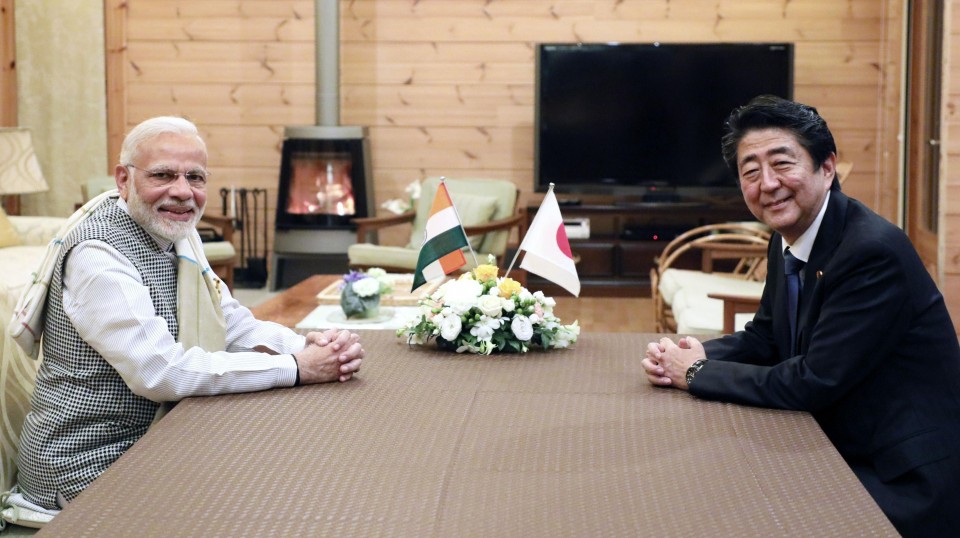 In September last year, Abe paid a visit to Ahmedabad in Modi's home state of Gujarat in western India and attended a ceremony to mark the beginning of construction of a new high-speed railway employing Japanese bullet train technology to link the city and Mumbai.

During the first official visit to Beijing by a Japanese political leader in nearly seven years, Abe and the Chinese leaders agreed on the principle of moving from "competition to cooperation" in a new era of relations between Asia's two biggest economies.

Abe and Modi will hold a formal summit Monday in Tokyo, during which strengthening bilateral security and economic cooperation are expected to be high on the agenda.

China is a strategic and economic rival of India. New Delhi has been apprehensive about Beijing's "One Belt, One Road" initiative to build ports and other infrastructure around the Indian Ocean linking Asia with other parts of the world and its naval expansion in regional waters.

Abe and Modi will likely confirm their cooperation to realize a "free and open" Indo-Pacific, a concept aimed at developing high-quality infrastructure from Asia to Africa, while promoting principles such as freedom of navigation and the rule of law.

Abe is also likely to pledge the provision of low-interest loans worth more than 300 billion yen ($2.68 billion), including ones to help India's 500-kilometer high-speed railway project, Japanese government sources said.

In an interview with Kyodo News on Friday in New Delhi, Modi said his two days of discussions with Abe "will be an opportunity to review our ongoing cooperation and discuss ways for expanding our relationship for promoting peace, progress and prosperity throughout the Indo-Pacific region and beyond."

Japan and India, together with the United States, have been boosting defense cooperation to counter China's growing influence in the region, with the three countries conducting naval exercises regularly in the Indian Ocean.

"The India-Japan partnership has been fundamentally transformed and it has been strengthened as a 'special strategic and global partnership'," Modi said. "There are no negatives but only opportunities in this relationship which are waiting to be seized."