Princess Ayako, the youngest daughter of Emperor Akihito's late cousin, got married to commoner Kei Moriya on Monday at a wedding ceremony at Tokyo's Meiji Shrine.

The 28-year-old princess lost her royal status after her marriage to the 32-year-old employee of shipping company Nippon Yusen K.K. was legally registered following the ceremony. 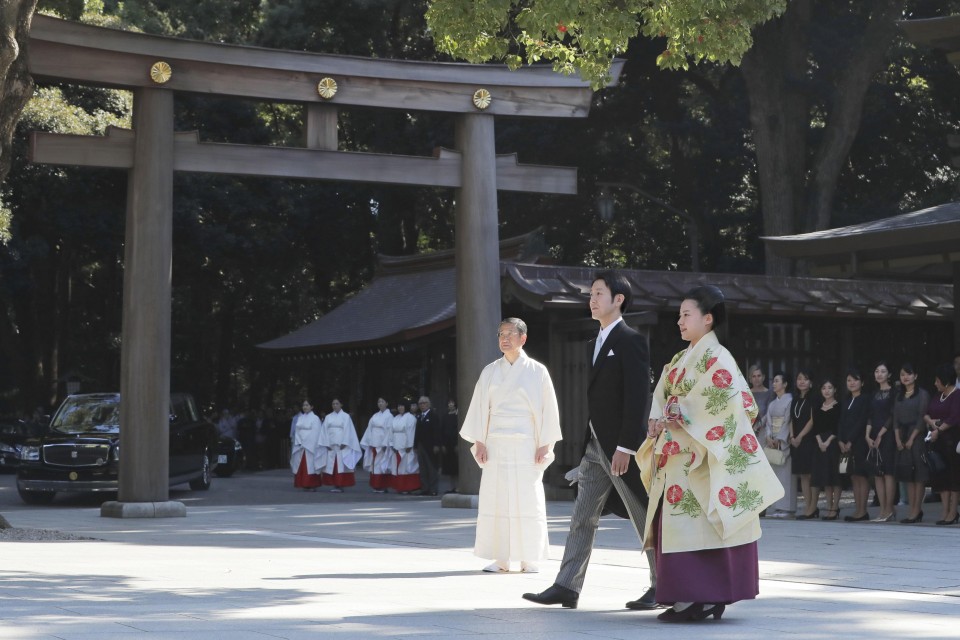 Arriving at the shrine in traditional court clothing -- kimono robe and "hakama" skirt -- with her hair tied in the "osuberakashi" ancient style for noblewomen, the princess smiled at Moriya, who had been waiting for her in a morning suit.

The couple exchanged rings and read out the wedding oath during the Shinto ceremony attended by about 30 people including family members.

"How happy I am that many people have celebrated (our marriage). We want to make efforts to become a couple like my mother and father," the princess told reporters following the ceremony.

She also said her late father Prince Takamado, who died in 2002, "would have rejoiced at my marriage" if he were alive, adding the top hat Moriya was holding had been her father's.

Moriya said, "I want to support her firmly and hold hands to look forward and build a family full of smiles." 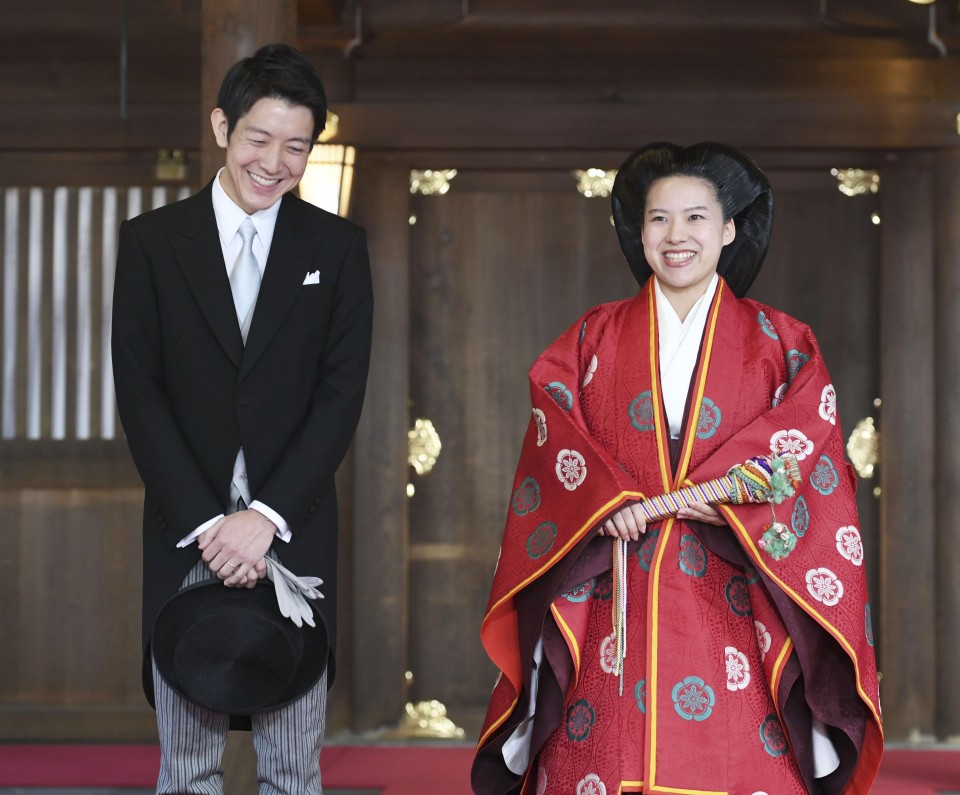 It was the first marriage involving an imperial family member since October 2014, when the princess' older sister Noriko, 30, married Kunimaro Senge, 45, a senior priest of Izumo Taisha, a Shinto shrine in Shimane Prefecture.

With the departure of Princess Ayako, the number of imperial family members will fall to 18 and that of female members to 13.

Emperor Akihito, 84, will also abdicate on April 30 next year after he signaled his wish to do so due to concern about his age and failing health. After retirement, he and Empress Michiko will not engage in public duties.

Hanako Takeda, a 27-year-old friend of the princess from her school days, said, "I was overwhelmed when I saw the bride and groom together as I remembered past times with the princess. I want her to create a bright family that can make everyone smile."

"I'm delighted at this happy occasion. Mr. Moriya looked cool, as he usually does. I hope they will make a wonderful couple," said Yasuyuki Goto, 33, a friend of Moriya.

The government also congratulated the couple. 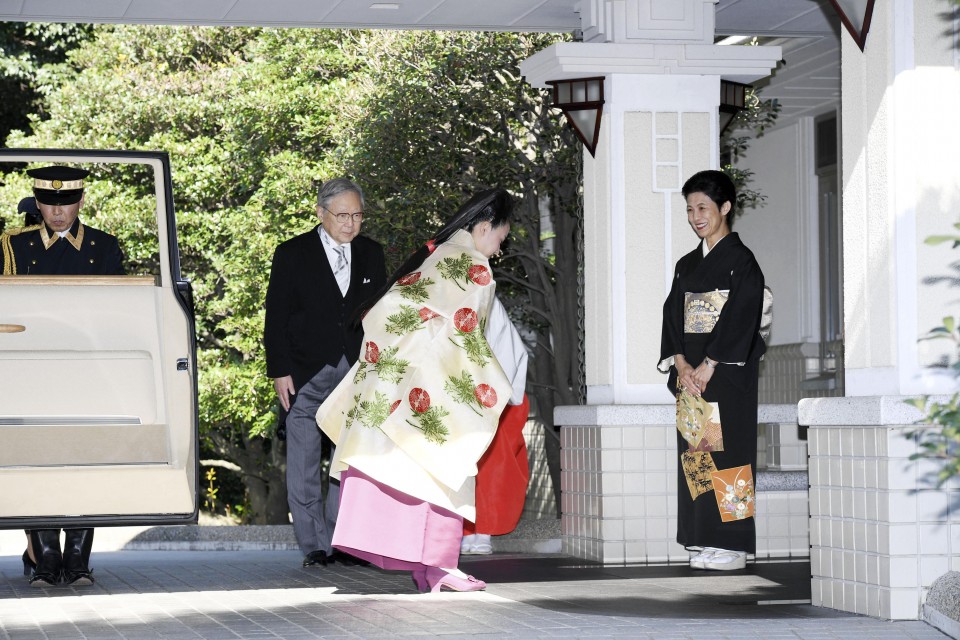 "We extend our most sincere congratulations and wish a long and happy life together," Deputy Chief Cabinet Secretary Kotaro Nogami told a press conference.

The couple first met last December when they were introduced by Princess Ayako's mother Princess Hisako, who had long known Moriya's parents and met with the groom last November at a photo exhibition of a nonprofit organization supporting children in developing countries.

The widow of Prince Takamado was hoping to spark her daughter's interest in international welfare activities by meeting with Moriya, who is a board member of the nonprofit group Kokkyo Naki Kodomotachi (Children without Borders).

The princess' mother said in a statement she had raised her daughter to "prepare for the day when she stands up for herself" and hopes the couple "will build a good family full of joy and happiness." 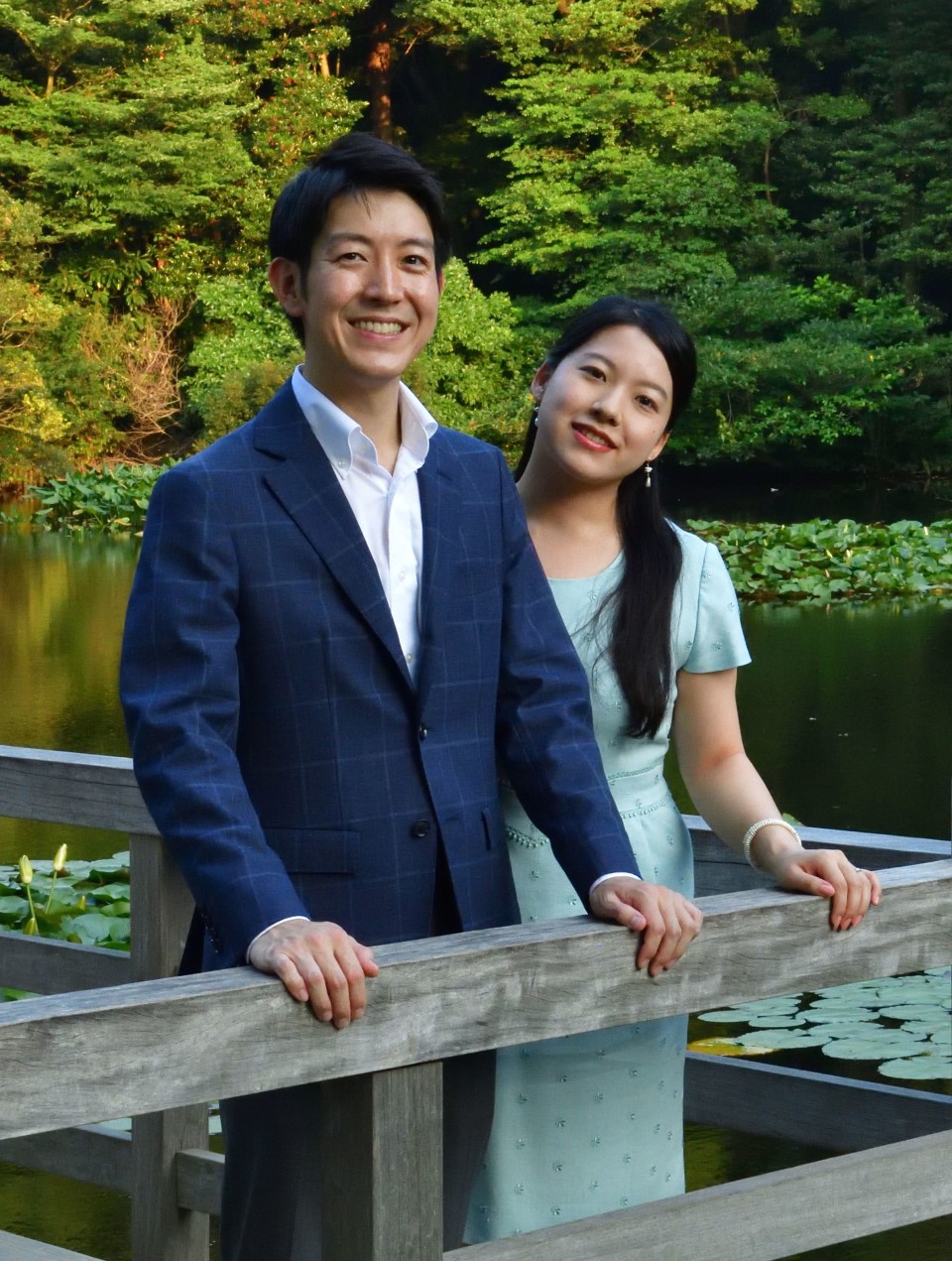 On Tuesday, a banquet will be held at Hotel New Otani in Tokyo, attended by Crown Prince Naruhito and Crown Princess Masako, the heads of the three branches of government as well as Prime Minister Shinzo Abe, who will make a congratulatory speech.

The couple is not planning a honeymoon.

Princess Ayako graduated from Josai International University in Chiba Prefecture and earned a master's degree there in 2016. She is currently working as a research fellow in the university's Faculty of Social Work Studies.

Moriya went to kindergarten in Paris and attended schools in Switzerland and Britain before graduating from Tokyo's Keio University. He enjoys running in marathons and competing in triathlons.

Under the Imperial House Law, women lose their royal title after marrying a commoner, but the shrinking number of imperial family members has raised concerns about the stability of the imperial succession and how to alleviate the burden of performing public duties on the remaining members.

On Friday, Imperial Household Agency officials said the princess will retain honorary positions at two organizations even after leaving the imperial family, in what would be the first such instance.

Based on the law on imperial household finance, the princess will receive about 107 million yen ($950,000) from the state.