Yoshiki, the driving force behind X Japan, speaks at length in Tokyo

Japanese rock icon Yoshiki spoke at the Foreign Correspondents' Club of Japan on Thursday, touching on his band X Japan's first studio album in 21 years and ongoing battle to make it big in the United States. 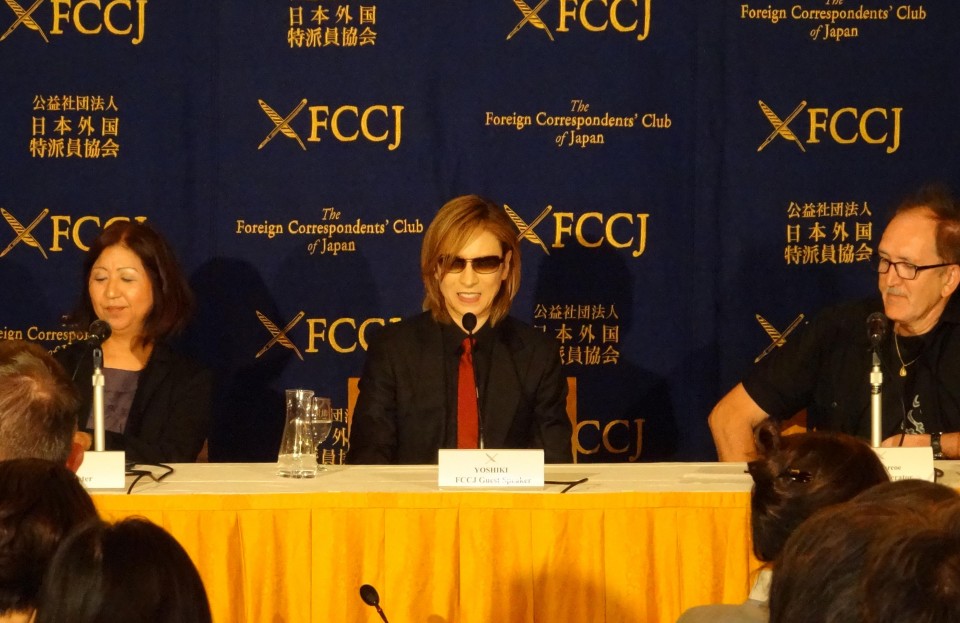 Below are some highlights from his wide-ranging press conference.

On being the second most famous person on his flight to Japan:

"I just arrived a few hours ago in Japan from Los Angeles. I was recording in LA until the last minute and was supposed to come back yesterday, but I was recording so I stayed up two nights and came here. Luckily, I slept on the plane, but the funny thing was when I arrived here at five or six in the morning, I was wearing pajamas and some kind of jacket and when I got off the plane there were so many photographers and everything and I thought what's going on? Am I still dreaming? I thought my press conference was supposed to be here at FCCJ not at the airport. I tried to run and escape and I found out I was on the same plane as (recent U.S. Open tennis winner) Naomi Osaka!"

On his upcoming gigs, and how long it is since X Japan has performed:

"We played at Coachella in April, so we have played a few months ago, but for big shows, the last time was about eight years ago at (Yokohama's) Nissan Stadium in front of 130,000 people, something like that. So, these shows are going to be in front of 30,000 people for three nights so almost 100,000 people."

"I am also performing my classical show at Tokyo International Forum on November 12 and 15 that I just announced today, the first since (my) Carnegie Hall shows in 2017...I am going to be performing some of the songs from Beethoven such as 'Moonlight Sonata' or Tchaikovsky, as well as some of my own compositions that I composed for the Emperor of Japan, some classical versions of X Japan's songs, Golden Globe theme song..."

On working with George Martin and his plans for more classical albums:

"George Martin, as you may know, was the producer for the Beatles, and I am a fan of the Beatles as well, so it was such an honor for me to be working with him...Actually, I am working on my new classical album at the same time as X Japan's album which is just done."

"I have finished recording. We don't have a specific date for releasing it, and I am also working on my classical album as well. I am going to Germany next week to perform with Sarah Brightman, just one song. She has my composition."

On whether he has any other rock collaborations in the works:

"One of my good friends, Marylin Manson, happens to live near my studio and we have done a lot of collaborations. We have not released any material yet, but maybe next year or so a new project may start. We have already recorded a few songs. Actually, he came to support our second show at Coachella. It was a last minute thing and I was like why don't we play his signature song "Sweet Dreams," a piano and vocal version."

"I also worked with DJ Skrillex at the Fuji Rock Festival. That was also last minute."

On difficulties in making documentary film "We Are X":

"It was the hardest thing I have ever done. As you may know, X Japan has a crazy history, almost too crazy to be true. Too sad to be true. Almost 10 years ago, my agent in America, Marc Geiger, the head of music at William Morris, said to me you guys need to talk about your past and create a film. He was trying to convince me but it was so hard for me to open that door to the past. First of all, because I lost my father, he took his own life, also X Japan's guitar player Hide passed away and also Taiji. Also the vocalist, Toshi, he got brainwashed (by a cult called Home of Heart) so it's like, if somebody tried to write the script, it would too much and I thought hell no I cannot do that kind of documentary."

"I shut the door on that and wanted to move forward. But after several years of talking, people around me convinced me that our story, what we went through, might be able to help people's lives, may be able to inspire people who might have been suffering from depression or something because we came back and we were actually back and we were working for the future. I was like, 'okay, that might be a good reason to revisit that issue, that film project' and a few years ago we decided to do it."

"I didn't want to work with people who knew X Japan so it was so hard to find a director in Japan because people kind of know us. So my agent introduced me to a producer from England, John Battsek. He produced Searching for Sugar Man which won an Academy Award so he came on board and introduced me to a director in America who didn't know who X Japan was, so that was perfect. He started filming in Japan, and I sort of just became a subject for that."

"My last surgery was in May 2017. I had an artificial disc put into my neck between the fifth and sixth vertebrae. When I play music, especially when I play drums, I play like there is no tomorrow...I have had kind of suicidal thoughts always since I lost my father. I didn't want to live, but my mother bought me a drum set and I started banging drums and that kind of helped me, but at the same time, I just wanted to put my entire energy into the drums. I kind of knew I was destroying my body."

"I don't want to say I was kind of enjoying it, but it was kind of like releasing some anger and sadness. That hasn't changed, and when we play a show, we want to give our entire energy to the audience. We play really hard, so that is why I have injured my neck so many times."

"Several years ago I also had neck surgery. It's also partly because of the style I have been drumming and I have been headbanging pretty hard which I have found out is not good for your health. My doctor has said I will need a few more surgeries if I keep playing drums, and I am aware of that, but I work out six days a week and have been doing rehabilitation since last year. But it's rock and roll, and I just have to keep doing this." 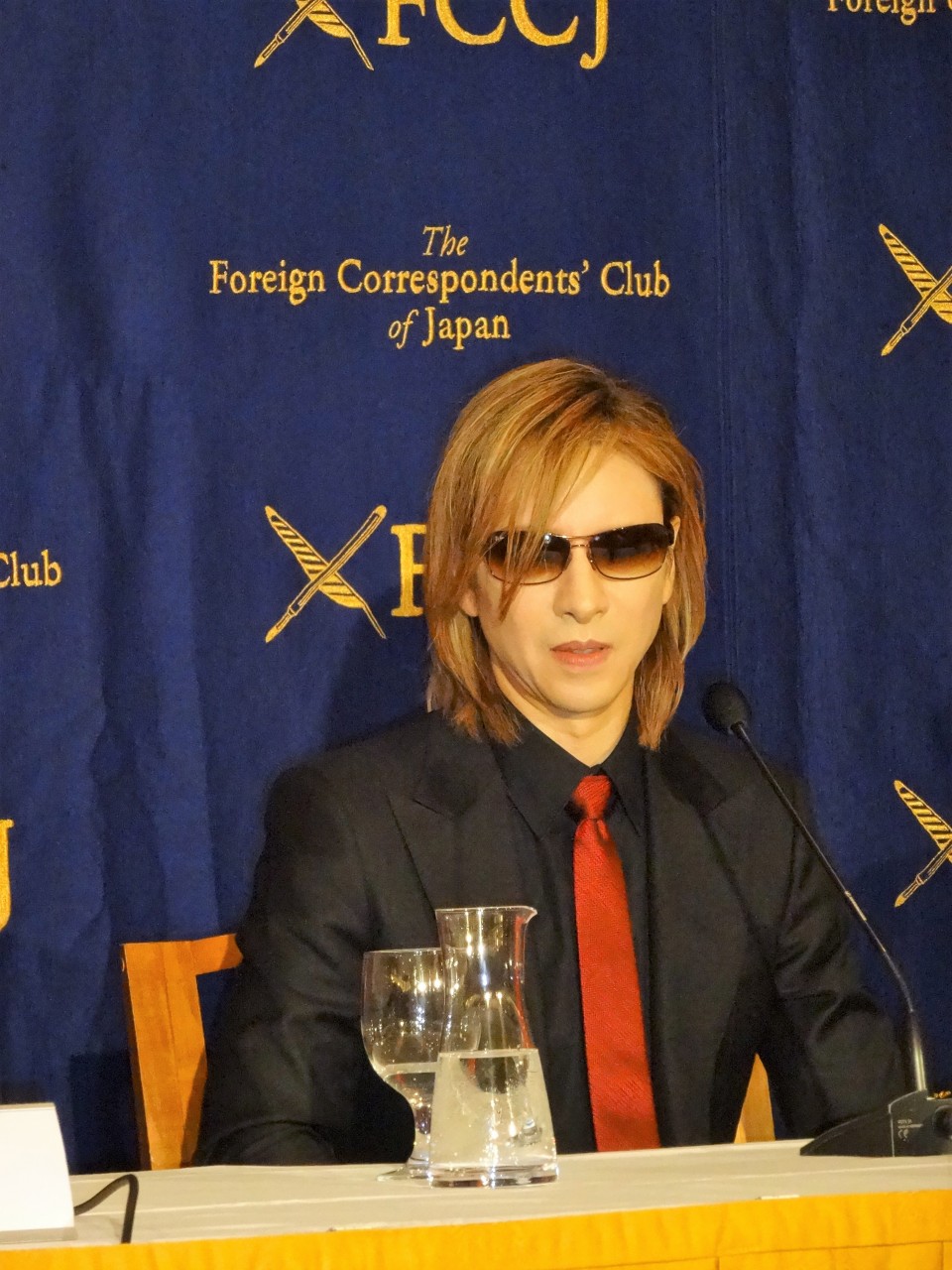 On his charity foundation's activities:

"I support children who are suffering physically or mentally or are in unfortunate circumstances. As I say, when I grew up, I lost my father when I was 10 years old, so I knew some kind of pain. I always have that kind of pain, so I can relate to children who have that kind of pain, not only physically but also mentally, and want to help those children. That's how I started it, I think in 2010. Also, I was supporting disaster relief before that so I decided to establish the foundation in 2010."

"I think, like, 'why am I existing? What is the reason?' especially when you are doing rock or something for society. Sometimes you lose that meaning of your life. It's kind of a selfish reason, too, but when I support people or help people that also helps me. It's little bit of a selfish (thing) but I can convince myself that I can still be alive in this world and doing something good. I do that to survive."

On the future for Yoshiki and X Japan?

"I have just finished recording X Japan's album, which took almost 10 years, so instead of thinking about a world tour or those things I just wanted to concentrate on finishing the album. The album is done, so I need to talk to management and my agent about what to do with this new album."

"Thirty years ago it was impossible for Asian artists, not only Japan or Japanese artists, to be doing something outside of Asia, especially America or Europe. But over the past 30 years, things have changed, especially the internet really contributed to that. Now a lot of artists from Japan or South Korea or China have started performing throughout the world, so I think it is amazing."

"I feel like I am almost dreaming because I moved to Los Angeles about 25 years ago, and of course, I had a dream that we were going to be the biggest rock stars in the world, but 25 years ago they were not ready at all. There are some great rock bands from Asia or pop groups that made a hit here and there but not a solid hit or anything. Finally, after all those years, if there is a wall between East and West, the wall became much lower. It's almost like we were being given a second or third or fourth chance, so I would like to see this opportunity to break into the Western market."

X Japan play three upcoming dates, Sept. 28, 29 and 30, at Makuhari Messe in Chiba, near Tokyo, and Yoshiki will perform Yoshiki Classical with the Philharmonic Orchestra on Nov. 12 and 15 at Tokyo International Forum.