Mongolian grand champion Kakuryu suffered his first loss on Wednesday, as yokozuna Hakuho emerged as the sole leader with a perfect 11-0 record at the Autumn Grand Sumo Tournament.

Yokozuna Kisenosato (8-3), who secured his first winning record in nine meets on Tuesday, also suffered an upset at the hands of sekiwake Ichinojo in the penultimate bout at Ryogoku Kokugikan.

The 227-kilogram Ichinojo (4-7) started out by slapping Kisenosato's face, and gave him a final shove as the yokozuna tried to resist the slaps with his hand to no avail.

Kakuryu, who won back-to-back championships earlier this year, was defeated by Tochinoshin (7-4). The Georgian ozeki grabbed Kakuryu's belt with both hands, and lifted him over the straw bales in a frontal force out.

Tochinoshin, the winner of the January meet, is competing as a demotion-threatened "kadoban" ozeki and needs one more win to maintain his No. 2 status at the next grand sumo tournament.

In the day's final bout, Hakuho posted an easy victory over ozeki Takayasu (9-2) after psyching out his opponent with three match delays. Hakuho slapped Takayasu with his right hand, and charged into him before upending him over the edge. 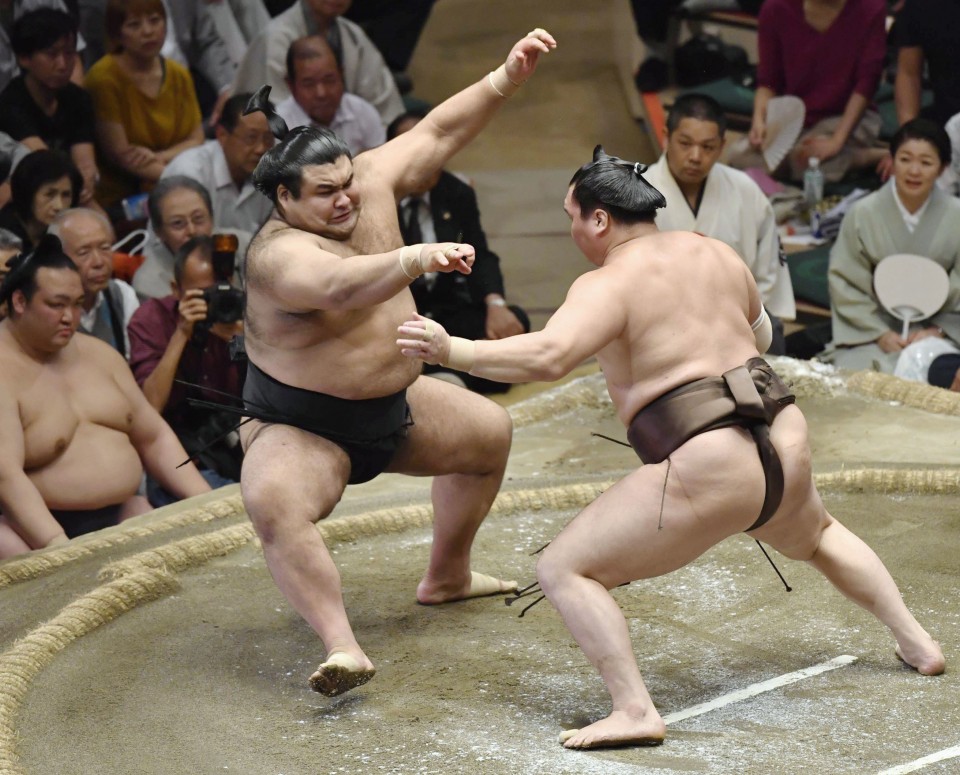 Hakuho has moved closer to winning his first championship this year, and a record-extending 41st career title in the elite makuuchi division. Takayasu is the only wrestler in sumo's second-highest rank who has yet to win a top-division championship.

Brazilian maegashira Kaisei put his arms around the fan-favorite sekiwake, and sent him flying headfirst off the raised ring.

Ozeki Goeido posted an easy win over No. 3 Shodai (5-6) to stay two wins behind Hakuho. Goeido is tied with No. 13 maegashira Takanoiwa and Takayasu at 9-2.

Takanoiwa beat No. 8 Kotoshogiku (6-5). Takanoiwa, who suffered a concussion in an after-hours assault by fellow Mongolian Harumafuji last October, prompting the yokozuna's retirement, returned to the top division after winning his second juryo division championship in a playoff at the July meet in Nagoya.