A couple recognized by the Guinness World Records in July as the oldest living married couple with a combined age of 208 years was honored Tuesday by a local mayor in western Japan.

The couple -- Masao Matsumoto, 108, and Miyako, 100 -- together live in a retirement home in the city of Takamatsu, Kagawa Prefecture, having got married more than 80 years ago. The couple became the new record holders on July 25. 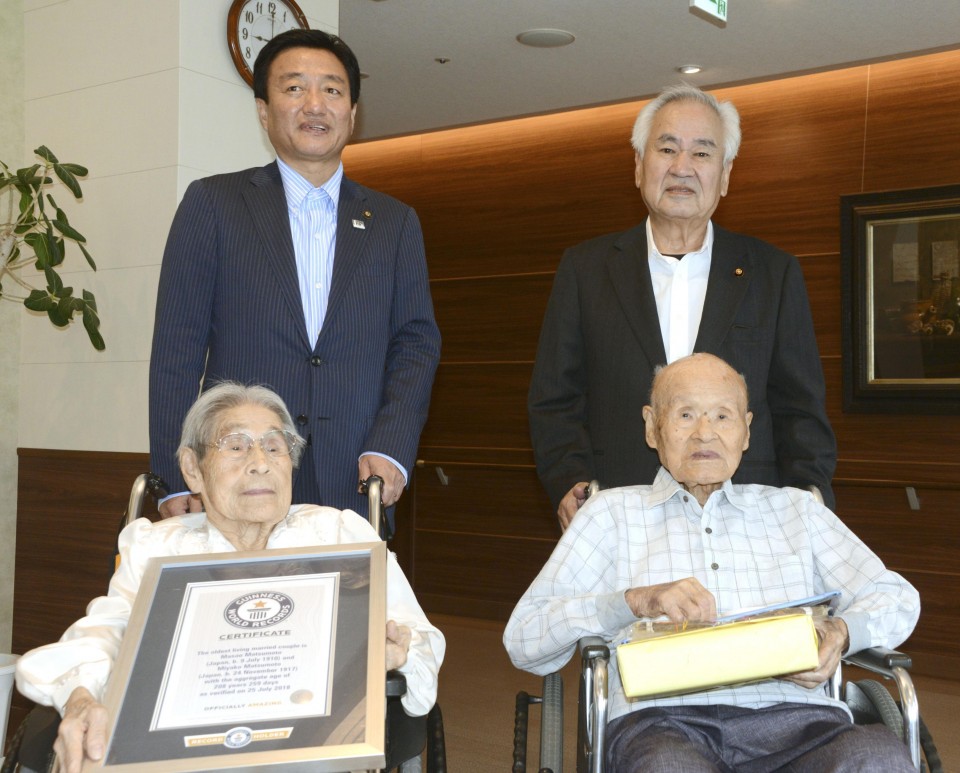 When asked by Takamatsu Mayor Hideto Onishi the secrecy to longevity, the husband replied, "I like exercising so I think I have a healthy body." His wife smiled and said, "Takamatsu is a very happy place to be."

Both are from southwestern Japan's Oita Prefecture and got married in 1937. The couple has five daughters, 13 grandchildren and 25 great-grandchildren.

Six months after their marriage, Masao was recruited by the Imperial Japanese Army and dispatched to China during the war.

After returning to his family in 1946, Masao became a harbor worker with the transport ministry and the couple moved around the Seto Inland Sea coast.

The Matsumotos moved to Takamatsu after Masao's retirement to enjoy the warm climate in the city, where Masao landed a new job.

According to Guinness, their daughters believe that the couple's longevity is not only due to the strength of Masao, but also Miyako who prepared great meals for the family until she was 98.

When family members visited the retirement home to take photos with the Guinness official certificate, the wheelchair-bound Masao went with the family to a nearby udon noodle restaurant. His long-held tradition is to treat his visitors to tasty udon, Guinness said. The noodle is a specialty of Kagawa Prefecture.

The record holders for the oldest married couple with the highest aggregate age ever are Norwegians Karl Dolven (1897-2004) and Gurdren Dolven (1900-2004), who had a combined age of 210 years, according to Guinness.