A Japanese Peruvian pastry chef based in New York City recently unveiled an ice cream sundae that ranks among the world's most lavish and expensive desserts.

The "Bear Extraordinaire," launched at the upscale Baccarat Hotel in Manhattan last month, is a $300 sundae featuring black truffle, champagne sauce and edible gold leafing served in a $1,200 crystal and porcelain bowl shaped like a bear. Purchase of the specially made vessel is optional.

"We have sold several and it's fun to watch our guests' reactions when they see and taste it," chef Rosario Wakabayashi, 31, told Kyodo News. "They think it's really special and this makes me very happy." 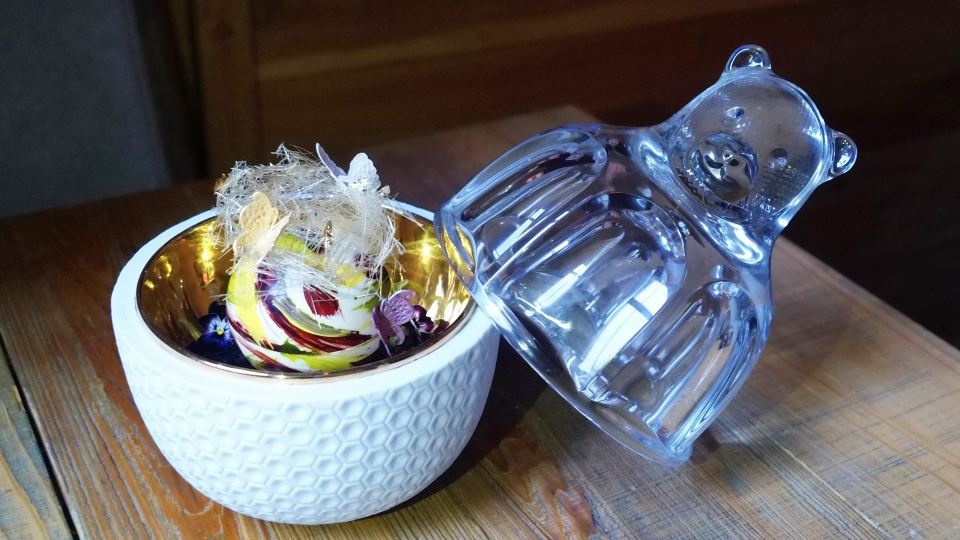 The ice cream, made in-house from vanilla beans imported from Madagascar, is served in a white chocolate shell that sits atop a mixture of black truffle, dark chocolate and cocoa nibs.

Edible gold and silver leafing adorns the shell along with hibiscus champagne sauce and hand-painted strokes of colored cocoa butter. Topping it off are thin-spun sugar threads with fondant butterflies and edible flowers.

"It's an exquisite multi-sensory experience," hotel patron Virgilia Virjoghe said after tasting the sundae. "Visually appealing with a heavenly taste and enticing scent."

A native of Peru who attended Le Cordon Bleu culinary school in Lima, Wakabayashi spent vacations in Japan with her father's side of the family and landed her first job in New York City at a Japanese bakery.

"I learned a great deal about Japanese desserts and culture," explained the chef, whose latest creation emphasizes the art of presentation and a balancing of high-end ingredients.

"The quality of the premier ingredients and the level of craftsmanship that goes into creating the dessert dictated its price point," she said.

According to the Guinness Book of World Records, the Manhattan restaurant Serendipity 3 set a former record for most expensive dessert with a $1,000 sundae in 2004, only to outdo itself in 2007 with a sundae that featured a blend of 28 cocoas and was sold with keepsakes such as a diamond-studded spoon, bracelet and serving dish for a total price of $25,000.

Other notably extravagant desserts in recent years have included a gold-covered cupcake from Bloomsbury's in Dubai and a premium cognac-infused sundae from Chicago's Langham Hotel, selling for around $1,000 each.

The "Bear Extraordinaire" is available at Baccarat Hotel through Labor Day.