Okinawa retracts approval of landfill work for U.S. base transfer

Okinawa Prefecture retracted Friday its approval of landfill work for the relocation of a key U.S. military base as instructed by the late Okinawa Gov. Takeshi Onaga, citing illegality in the procedure.

Withdrawal of the 2013 approval given by Onaga's predecessor affects the U.S.-Japan plan to transfer U.S. Marine Corps Air Station Futenma within Okinawa Prefecture, rather than elsewhere as demanded by many Okinawa residents angry about crimes and accidents involving U.S. military personnel.

The retraction calls into question the legality of the landfill work. As Tokyo is highly likely to take the matter to court in an attempt to confirm the validity of the prefecture's earlier approval, the stage is set for another legal battle to start between the central government and Okinawa possibly even ahead of the gubernatorial election on Sept. 30.

Before his death from pancreatic cancer on Aug. 8, Onaga instructed local officials to take the necessary procedures to retract the approval. The central government had postponed landfill work that was scheduled to begin on Aug. 17 without providing a detailed explanation for the decision.

"Taking Governor Onaga's passion, we judged properly based on the law," Deputy Gov. Kiichiro Jahana, who was entrusted by Onaga to retract the approval, told a press conference.

"We'll continue to do our utmost to prevent the construction of a new base," Jahana said. 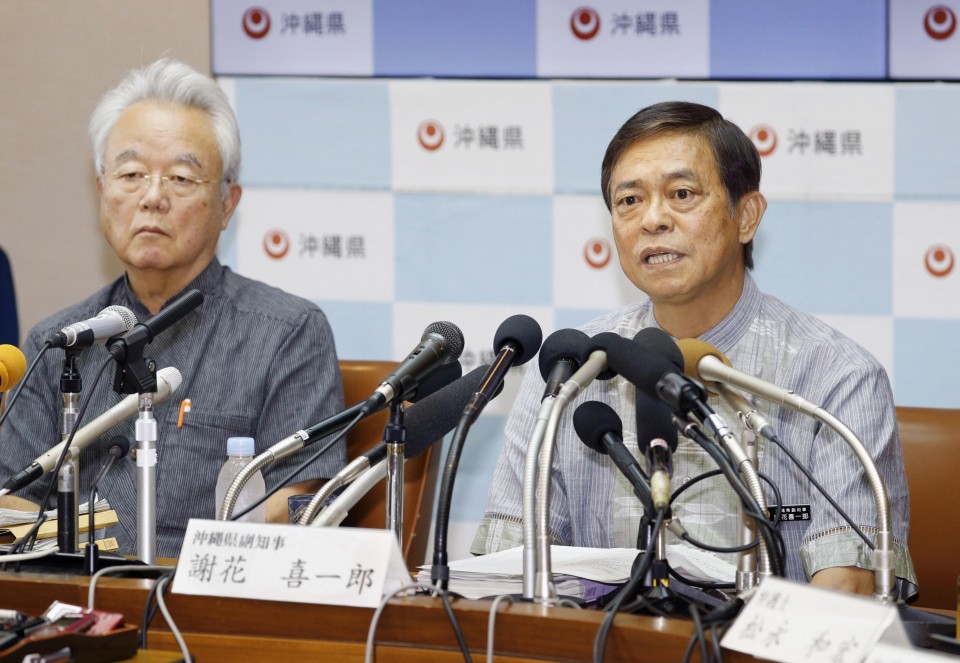 He dismissed the local bureau of the Defense Ministry's claim that the landfill work is legitimate as groundless because the bureau had failed to make certain corrections at the prefecture's repeated request, and soft ground had been found underlying the relocation site.

The prefecture also maintains the bureau's measures to protect the environment have been insufficient, a source close to the matter said.

Defense Minister Itsunori Onodera told reporters that the approval withdrawal was "very regrettable," adding "our bureau in Okinawa will examine the reasons of the retraction and take necessary legal actions."

If the central government takes the matter to court and the court rules in its favor, the landfill work could proceed. But the prefectural government may also take some other legal action in an attempt to block the construction.

Onaga had opposed the plan to move the Futenma base from a crowded residential area in Ginowan to the less populated coastal district of Henoko in Nago, both in Okinawa, and demanded the facility be moved outside the prefecture. 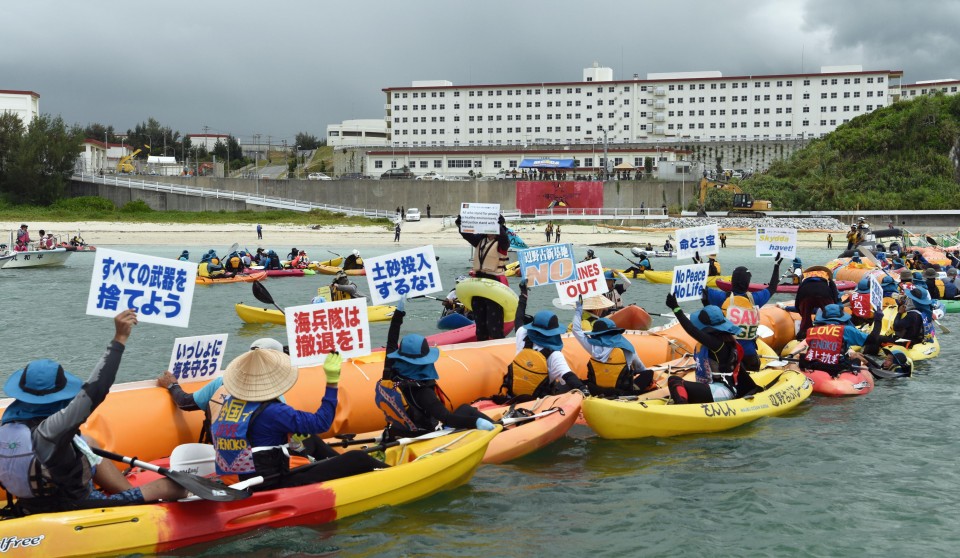 (Protesters in canoes rally in Henoko in 2017)

In October 2015, Onaga revoked his predecessor Hirokazu Nakaima's approval of the central government's request for landfill work in Nago, pointing to legal "defects" in Nakaima's decision. But the Supreme Court ruled against Onaga's position in December 2016, leading to the resumption of the construction.

The Abe administration has been pushing for relocation of the base within the prefecture, but Sakima has not made his position on the matter clear. Tamaki has expressed his opposition to the controversial transfer, saying he will "fulfill the last wish" of Onaga.

The central government considers the relocation plan, agreed to by Tokyo and Washington, as the "sole solution" to remove the dangers posed by the Futenma base while maintaining the perceived deterrence of the Japan-U.S. alliance.

But many local residents of the southern island prefecture, where the bulk of U.S. military facilities in Japan are located, hope the base will be moved outside Okinawa due to accidents and crimes involving U.S. military personnel.

Japan and the United States reached an agreement in 1996 on the return of the land used for the Futenma base. In 1999, the Japanese government decided to relocate the base to the Henoko area.