Asia's biggest multisport event, attracting more than 10,000 athletes from across the continent and offshore islands, formally opened Saturday in Indonesia for two weeks of competition in 40 sports ranging from the mainstream to the esoteric.

The eighteenth edition of the Asian Games, running through Sept. 2, will be an important proving ground for the 2020 Tokyo Summer Olympic Games, a chance for Indonesia to show it can host a major sporting event and a special occasion for North Korea and South Korea to demonstrate their detente.

Indonesian President Joko "Jokowi" Widodo, who runs for a second term next April, declared the games open in a ceremony at Jakarta's Gelora Bung Karno Stadium.

"We, the nations of Asia, want to show that we are tied in brotherhood," Jokowi said. "We are united and want to make achievements." 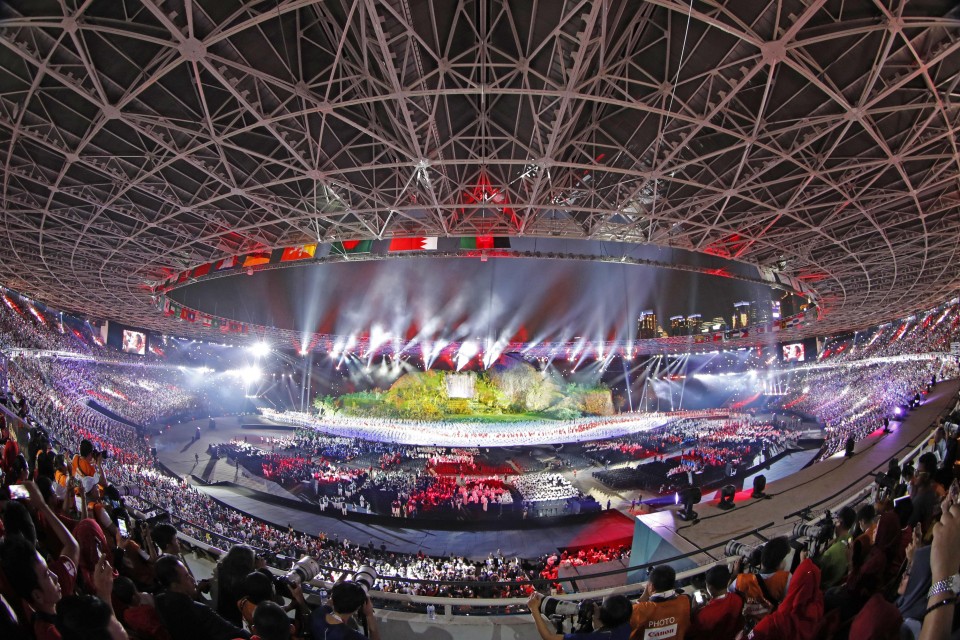 The ceremony, with plenty of fireworks, came a day after the world's fourth most populous country with more than 300 ethnic groups and 17,000 islands, extending along the equator as far as 5,000 kilometers, marked the 73rd anniversary of its independence.

Symbolizing the Southeast Asian country's rich geographical features, a gigantic greenery mountain and running waterfall built by local artists was set up behind where popular Indonesian musicians and singers took the stage and performed shows reflecting the diversity of its culture along with thousands of dancers.

Following the ceremony, athletes from 45 countries and regions will vie in 465 events including non-Olympic disciplines such as kabaddi, sepak takraw and wushu.

Nearly 40,000 troops and police officers will be deployed at all venues of the 16-day sports spectacular to ensure security and prevent potential terrorist attacks, Indonesia's national police chief Tito Karnavian told a press conference hours before the ceremony. 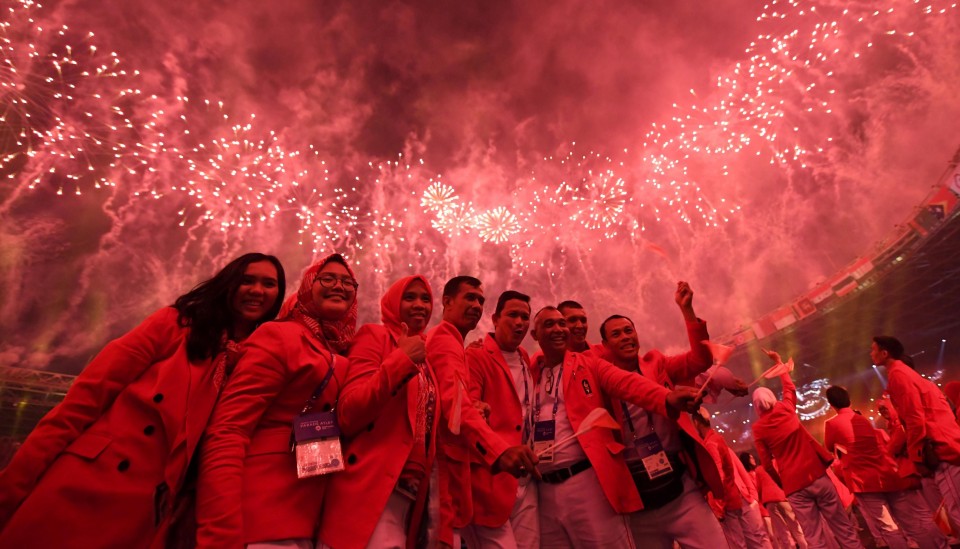 It is the second time since 1962 that Indonesia has hosted the games, the world's largest multisport event after the Olympics.

"As an Indonesian, I am proud because it rarely happens here," said Tono Siswandjava, a 61-year-old businessman from Bandung, the capital of the country's West Java provincial capital. "In 1962, I was still a kid and could not really feel the atmosphere."

"Fifty years from now, I may have already died. So, this is a very rare opportunity and I don't want to miss it," he said.

All 32 Tokyo Olympics sports, with the lone exception of surfing, will be contested in the 2018 Asian Games in Jakarta and Palembang, the provincial capital of South Sumatra. Those include skateboarding and sport climbing, which are among five new categories added to the program for Tokyo 2020.

Esports, or competitive video gaming, will also make its debut at the quadrennial games as a demonstration sport before it becomes a medal event in 2022. 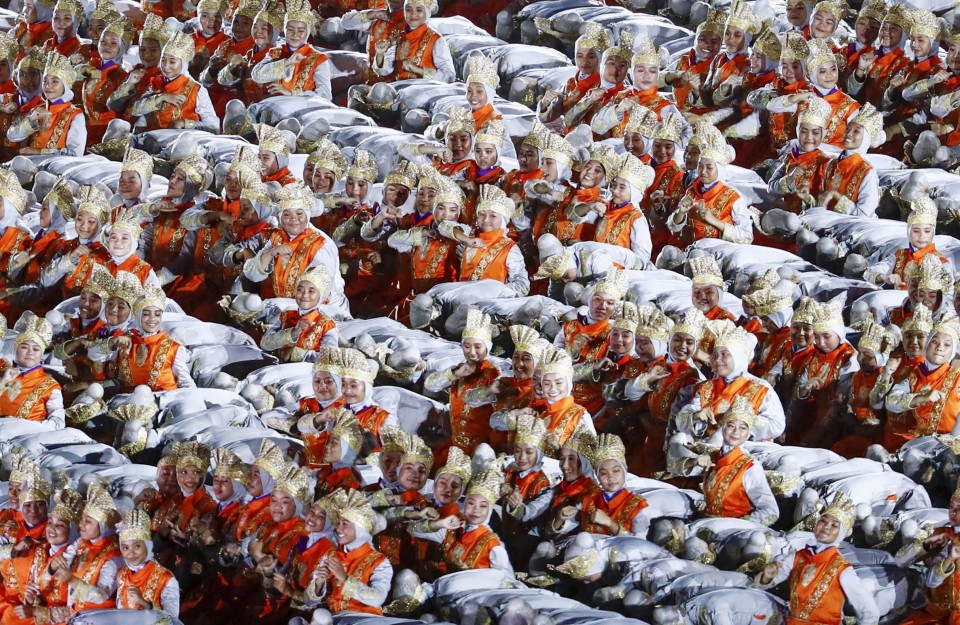 During the ceremony themed around the concept of "energy of Asia" at the 75,000-capacity stadium, athletes from North and South Korea marched together, with some of them holding their hands up high together, under the flag that symbolizes a unified Korean Peninsula.

South Korean Prime Minister Lee Nak Yon and North Korean Vice Premier Minister Ri Ryong Nam raised their arms together from the VIP seats as the two Koreas' athletes, wearing the same white and blue uniform, passed them by and a great cheer rose from the crowd.

The two Koreas, which have turned to sports diplomacy this year to facilitate dialogue, are fielding combined teams in basketball, rowing and canoeing -- the first time they have competed as one at the Asian Games.

Indonesia invited North Korean leader Kim Jong Un and South Korean President Moon Jae In to the opening ceremony, although neither has come to Jakarta. On Monday, North and South Korea announced their leaders are set to meet sometime next month in Pyongyang. 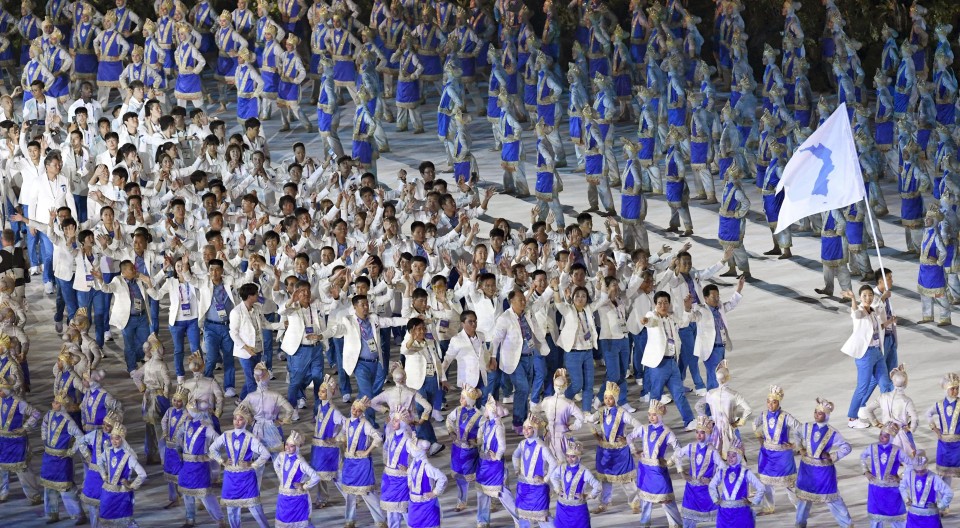 China has constantly topped the Asian Games' medal standings since 1982. This time, it has the second largest contingent of 845 athletes after Indonesia.

But about three-fourths of China's athletes are relatively young and lacking experience at either the Olympics or Asian Games, the premier sporting event for a region home to over half the world's population.

The makeup of the squad, Chinese officials say, is designed to uncover future medal hopefuls and help a new generation of athletes gain competitive experience ahead of the 2020 Tokyo games.

South Korea and Japan, which have come second and third, respectively, at every Asian Games since 1998, have recognized this competition can be a stepping stone to success at the next Olympics. Both teams number around 760 athletes. 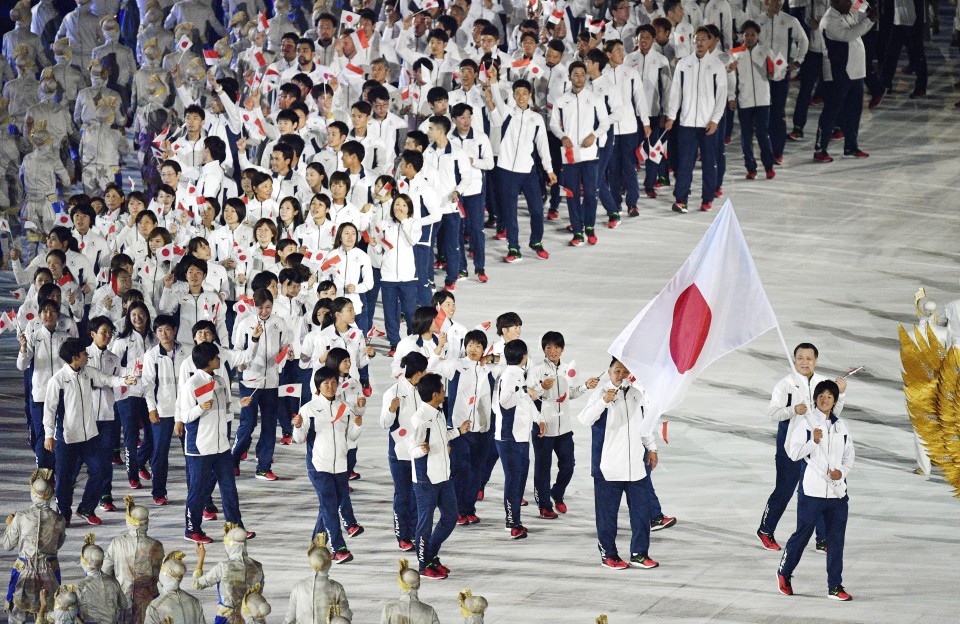 Japan's team, the biggest ever, is captained by sprinter Ryota Yamagata, a Rio de Janeiro Olympic silver medalist in the men's 4x100-meter relay. The flagbearer was ace softball pitcher Yukiko Ueno, an Olympic champion in 2008 and a bronze medalist in 2004.

Although Japan has set a target of 30 gold medals for the Tokyo Olympics, almost double the national record, the nation's sports hierarchy has declined to name a target for these Asian Games in Indonesia. In the 2014 games, held in Incheon, South Korea, Japan won 47 of the 439 gold medals up for grabs.

A number of Japan's world class athletes, particularly those in table tennis and gymnastics, have opted out of the Asian Games to prioritize world championships. But Japan's team still includes many of the nation's most talented competitors in various sports, including athletics, badminton, judo, karate, swimming and wrestling.