The joint North and South Korean men's lightweight four rowing crew had little time to prepare ahead of the Asian Games in Indonesia, but despite crossing the finish line last in their heat, their smiles endured.

The four rowers took to the water at Palembang's JSC Lake to open the joint Korean rowing team's campaign. They came up short in their four-team 2,000-meter heat but will still have a shot at the final depending on how they fare in Tuesday's repechage round.

"It was very hard," Kim Su Min, one of the two South Koreans in the crew, said. "We had little time (together), so it was hard to prepare."

The rowers met each other in South Korea just three weeks ago to familiarize and train for Asia's premier multi-sport event.

Kim, along with Yun Chol Jin, Kim Chol Jin and Park Tae Hyun finished the race in 7 minutes 12.74 seconds, more than 20 seconds behind the winners from Indonesia. The Asian Games host and China advanced to the final after taking the victory in their respective heats.

Despite the disappointing result, the South and North Korean athletes had smiles on their faces after the race as they shared conversation and drinks while packing up their equipment. 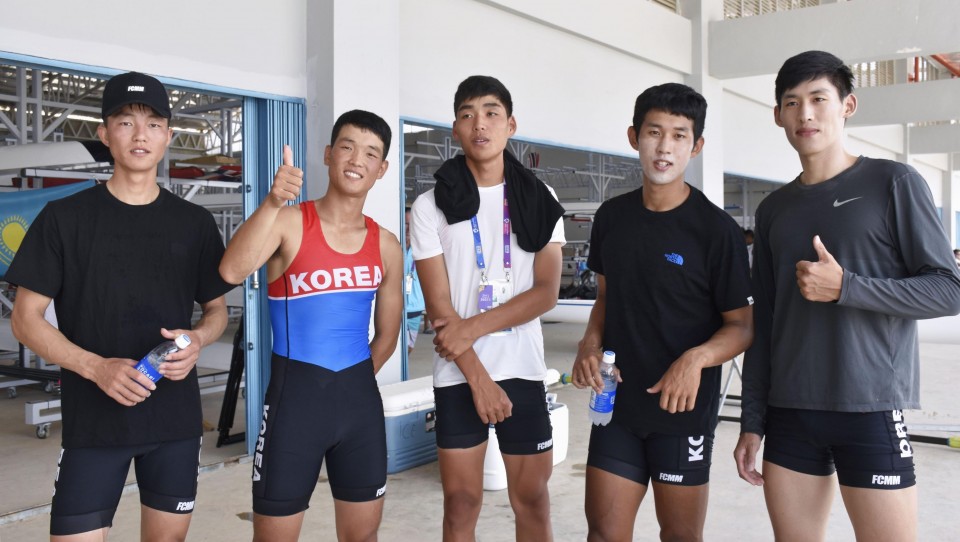 "We share the same language, so we have no problem communicating," Kim said, adding the athletes organized a dinner in Palembang before the games.

Teamwork is paramount in rowing, and having little time to prepare gave the crew next to no chance of success.

Manager Kim Sung Wook of South Korea said the rowers had to start preparing from scratch, knowing next to nothing about each other.

"We had to learn each other's abilities. We decided each rower's part then our coach decided which position on the boat." Kim said.

"The first time they met, they were very cool (towards each other). But as (competition) time got close, they became very happy to be together here," he said. "It's a very good chance to compete together and cooperate."