Working late, falling asleep on trains due to exhaustion and getting drunk to release tension from work might still be the typical image of Japan's "salarymen."

The country is notorious for a culture of overwork. Employees who stay late are still praised for hard work while others are frowned upon for leaving before their bosses. Many feel guilty for even taking paid holidays. "Karoshi," a Japanese word meaning death from overwork, is now known worldwide.

In a bid to change long-held working behaviors in Japan, a new labor reform law was introduced in late June, setting a legal cap on overtime work as one of its pillars.

The new legislation limits overtime work to less than 100 hours per month and 720 hours per year, and companies will be punished should they violate the limits.

Some companies are staying ahead of the curve as they introduce labor reforms that allow their employees to work less while contributing to improved productivity.

"With the introduction of overtime caps under the law, more companies are expected to shed overtime hours and have their employees take rests on weekends properly," said Mikio Mizobata, senior researcher of the Daiwa Institute of Research.

The law came at a time when the issue of karoshi was newly cast into the spotlight following the suicide of a 24-year-old female employee who had been overworked at Japan's biggest advertising firm Dentsu Inc. in 2015.

Even before the law was enacted, there were companies taking measures to reduce overtime hours and make it easier to take paid holidays. With the new law, however, Japanese companies are required to make serious efforts to tackle the overtime issue.

As a labor reform pioneer, major information technology service provider SCSK Corp. has been promoting an anti-overtime campaign since fiscal 2013. As part of the campaign, it pays back workers' reduced overtime allowances in the form of a special bonus.

Yoshinari Kobayashi, deputy general manager of the company's human resources group, said, "In the IT industry, people had thought that working longer hours is a virtue."

"But management recognized if the workers don't stay healthy and don't think their jobs are worth doing, it makes it difficult to provide value-added services to our customers and the company's growth also stagnates," he said. "That's why we have changed our way of working."

Panasonic Corp., which introduced a five-day workweek in 1965 for the first time in Japan, has allowed workers to take paid leave for child care, nursing care and other family matters on an hourly basis, instead of taking a half-day off, to help them use the family support paid-leave system more flexibly.

The electronics giant is also active in other areas. On the day when the reform legislation was enacted, Panasonic said it introduced a system allowing its employees to work at other companies for a certain period of time to help them broaden their perspectives and gain new abilities and skills. 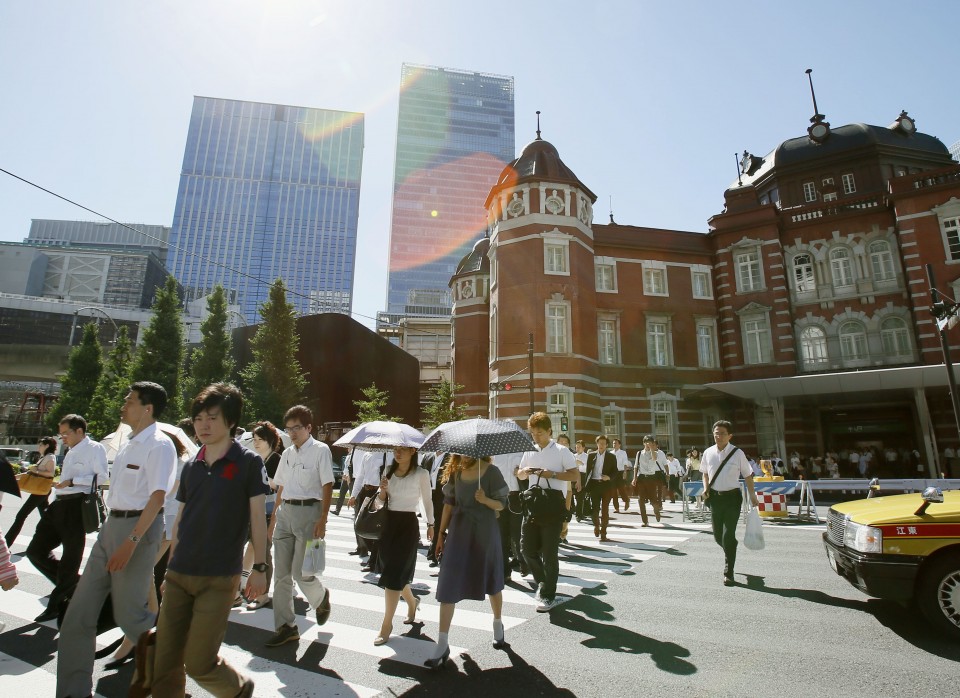 Japan's rapidly aging society and declining birthrate are among factors behind the introduction of the new law. With the decline of the working population, Japan also needs to create working environments more favorable for women.

Japanese staffing firm Pasona Group Inc., where women account for 60 percent of staff, is promoting measures to make it easier for working mothers to return to the workforce while raising children.

Pasona has an in-house babysitting facility for working mothers. At the company, meetings are regularly held to exchange information between female workers returning to work one or two years after having children and veteran working mothers. There is a sales team consisting only of working mothers.

Thanks to such measures, nearly 100 percent of female employees return to their jobs after giving birth, according to Pasona.

"We have been making efforts to create an environment that enables our workers to easily fulfill their potential," said Yoko Morikawa, a spokeswoman at Pasona, which is headquartered in an eco-friendly building in Tokyo with plants hanging from ceilings and a 1,000-square-meter animal farm on the upper floor.

However, there look to be further complications before its actual introduction that surfaced as a major source of contention between the ruling and opposition parties during the parliamentary debate on the law.

The system exempts skilled professional workers, such as dealers at financial institutions and researchers whose annual wages are more than 10.75 million yen, from working-hour regulations.

The government has claimed the scheme, which evaluates workers based on results rather than hours worked, would enable "flexible and diverse work styles." Opposition parties, including those backed by labor unions, have countered that the system would lead to an increase in karoshi, criticizing it as a "zero overtime pay" scheme.

Its labor productivity, as measured in dollars per hour, was $46 in 2016, the lowest among the Group of Seven countries and the 20th place out of the then 35 members of the Organization for Economic Cooperation and Development, according to data from the Japan Productivity Center.

SoftBank Group Corp., for example, is promoting the use of artificial intelligence, internet of things and robots to help improve the productivity of individual workers.

"We aim to double productivity by spending half the time so far needed," said Rika Takahashi, a spokeswoman of SoftBank Group. Workers do not worry about being replaced by AI and have more time to do innovative jobs, she added.

Daiwa Institute's Mizobata said the introduction of the new law could have negative side effects in the short term as workers' incomes are expected to fall due to a decline in overtime work.

"If labor productivity improves, income would not fall," he said. "It would be difficult, however, to expect an immediate improvement in labor productivity. A possible income decline could have a negative impact on consumption."

Mizobata, however, added that more companies are likely to compensate employees for their efforts to reduce overtime work through such measures as giving extra bonuses, making them incentives to improve labor productivity.

"A negative impact might be bigger in the short term but positive effects are expected to eventually surpass this, having a plus impact on the overall economy," he said.