The little success Japanese Prime Minister Shinzo Abe had in coaxing U.S. President Donald Trump into a multilateral trade framework showed the limitations of diplomacy when it is based solely on a personal relationship.

While he drew a renewed commitment from Trump to help bring back Japanese nationals abducted by North Korea in the 1970s and 1980s, political experts say he needs to explore alternative approaches to trade issues.

Abe and Trump, who share an obvious interest in dealing with Pyongyang's nuclear and missile programs, reaffirmed their cooperation in pursuing the denuclearization of the Korean Peninsula, but Trump complained of the "massive" trade deficit his country has with Japan and rejected Abe's request to exempt Japan from his recently formulated steel and aluminum tariffs.

Trump said his country would not return to the multilateral Trans-Pacific Partnership or consider exempting Japan from the tariffs unless a deal acceptable to the United States is made.

There was little expectation that the two leaders could find common ground on trade at a time they are both facing political pressure at home that is giving neither an inclination to concede ground.

Trump has been dogged by controversies over Russian interference in the 2016 U.S. presidential election, amid myriad other issues, while Abe has seen his approval ratings plunge as a wave of political scandals, including cronyism allegations leveled at him personally and suspected government document doctoring coverups, refuses to recede.

Nozomu Nakaoka, a visiting professor of American studies at Toyo Eiwa University in Yokohama, was critical of Abe's trip.

"For Abe, the best thing about the Japan-U.S. summit was simply that he could stay away from Japan's Diet for a few days and escape from being grilled by opposition parties," Nakaoka said. 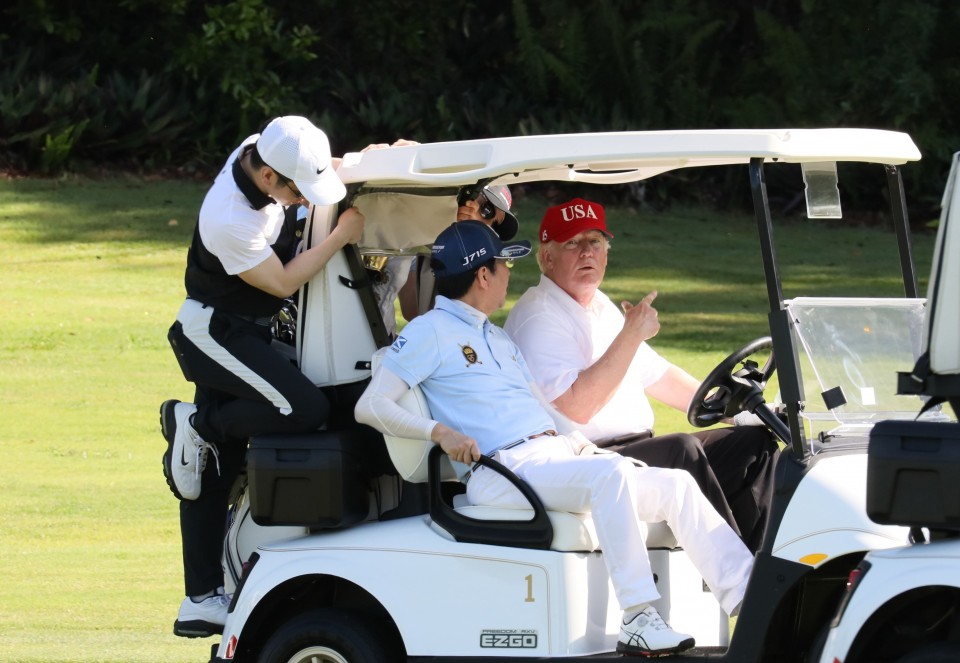 But Abe had little to benefit from the summit because their meeting ended up shedding light on their divergent trade stances, Nakaoka said.

Even on the diplomatic front, Abe had little to say about the sense that Japan may be left out of the loop once the North Korean leader sits down separately with South Korean President Moon Jae In and Trump through June, as he did with Chinese President Xi Jinping recently, despite the display of a united position on the "maximum pressure" campaign against the North.

Abe said in a joint news conference with Trump that they had "in-depth discussions" on their policy toward North Korea and that Japan being left behind is "not at all the case."

Abe's trip to Florida came after news of U.S. Secretary of State-designate Mike Pompeo's surprise meeting with Kim in Pyongyang.

Masaru Nishikawa, a professor at Tsuda University in Tokyo, said Trump obviously has no intention to make any concessions ahead of the mid-term U.S. congressional election in November.

"What could serve as a boost to Trump is a diplomatic success over North Korea and wins over Japan, South Korea and China in trade negotiations," the professor of U.S. politics said.

While Washington is in a simmering trade dispute with Beijing, it succeeded in broadly agreeing on a bilateral free trade agreement with Seoul late last month.

"A friendly personal relationship could set a positive mood in a meeting. But we can't expect that to change fundamental policies," said Ryo Sahashi, professor of international politics at Kanagawa University.

Sahashi said the outcome of the latest meeting could raise doubts at home about Abe's ability to negotiate deals with Trump.

Tokyo has to rely on Abe's personal ties for the time being, but Japan eventually needs to prepare alternative ways of negotiation with the Trump administration, Tsuda University's Nishikawa said.