The Japanese Self-Defense Forces' first amphibious fighting unit went into full operation on Saturday, with its main mission being to defend the country's remote southwest islands in the face of China's growing maritime assertiveness.

"The Amphibious Rapid Deployment Brigade will show to the international society our firm resolve to defend our islands," a senior Defense Ministry official said on behalf of Defense Minister Itsunori Onodera during a ceremony to mark the launch of the Ground Self-Defense Force unit, touching on the tough security environment in the East China Sea. 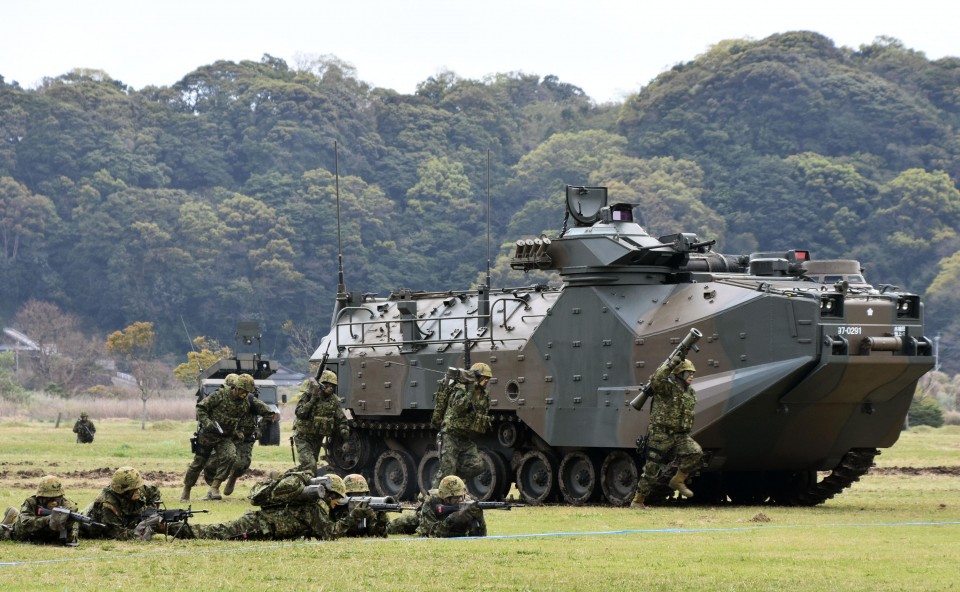 Based in the port city of Sasebo in the southwestern prefecture of Nagasaki, the 2,100-member brigade will be responsible for retaking any of the far-flung islands if they are invaded, including the Japan-controlled, China-claimed Senkaku islets in the East China Sea.

Admitting that the capability of the unit modeled on the U.S. Marine Corps is still "less than perfect," Maj. Gen. Shinichi Aoki, who leads the brigade, said at a press conference, "We will continue training and we hope to certainly become corps that can undertake the mandate given by the public."

But the celebratory mood surrounding the new brigade was overshadowed by recent revelations about the GSDF's suspected coverup of activity logs on a controversial past mission in Iraq, an incident potentially eroding public confidence in the organization.

In his message addressed to members of the brigade, Onodera reaffirmed the importance of appropriately handling and managing records of their operations and other official documents "to regain public trust."

The defense chief was expected to attend the event at the GSDF Camp Ainoura but cancelled the trip amid ongoing investigations into the activity log issue.

The new amphibious operations unit is expected to eventually grow into a 3,000-member force, with 17 V-22 Osprey tilt-rotor aircraft to be deployed in Japan to swiftly take members to the potential island battlefields and 52 Amphibious Assault Vehicles-7 being prepared so that troops can storm a beach from the sea. 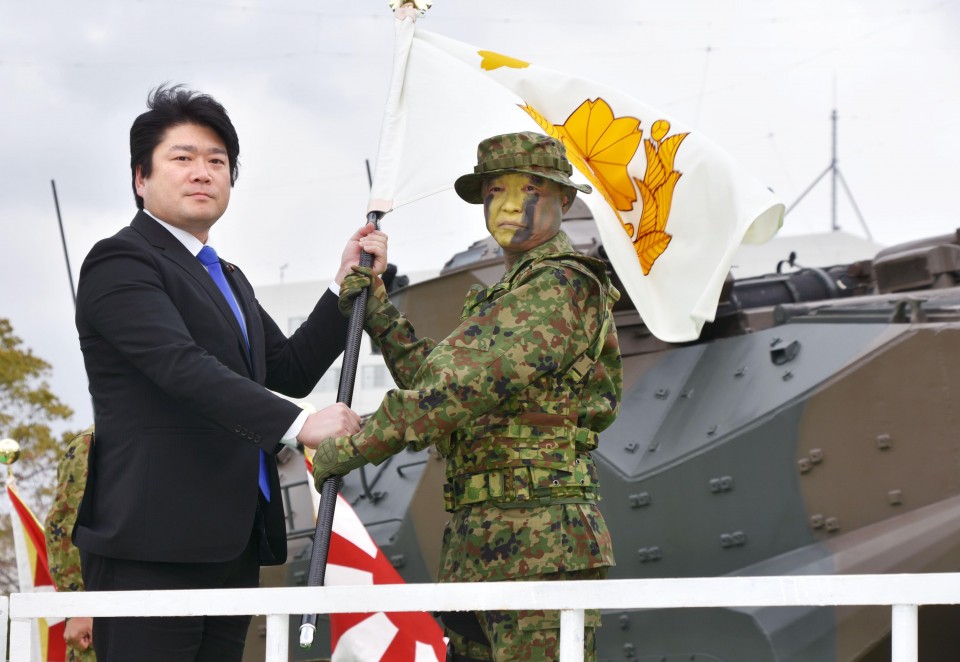 In a demonstration exercise carried out by about 220 members of the Japanese unit and some U.S. Marines based in the southern island prefecture of Okinawa, the Japanese troops displayed on a grass field their amphibious tactics by proceeding toward "the enemy" as they maneuvered the 10 newly acquired AAV-7s.

Japan has long been reluctant to allow its SDF to fully acquire the ability to conduct military operations involving landing on an enemy-held shore in light of its pacifist post-World War II Constitution, created in response to the country's wartime military aggression.

But the move to create the amphibious force appears to have become a less controversial issue amid concerns about China's expanding military activities at sea and in the air.

China Coast Guard vessels have frequently entered Japanese waters around the Senkakus, which are called Diaoyu by China. Tensions have grown since Japan bought most of the islets from a private Japanese owner in 2012, putting them under state control.

When asked by a reporter about the actual possibility of the southwestern islands being attacked by another country, Aoki said he cannot predict anything and added, "The important thing is to create a system so that such a situation will not occur. By engaging in training in peacetime, we will improve our deterrence effect."

Aoki also said that whether Japan and its key security ally, the United States, would work together to carry out actual amphibious operations to defend Japan would be a matter decided "case by case" at government-level.

The GSDF, meanwhile, is also gearing up to fill the so-called defense vacuum in the area southwest of Kyushu where its troops were only stationed on the main island of Okinawa until recent years. Plans are under way to deploy anti-aircraft artillery and anti-ship missile units on islands such as Miyako and Ishigaki.