As the most unusual new pitcher in a major league camp this spring because of his underhand delivery, Kazuhisa Makita wants to keep his skill from getting lost in translation and have fun in the process.

Having signed with the San Diego Padres over the winter, the submarine right-hander is determined to bridge any communication gaps that might get in his way -- despite his limited English vocabulary. 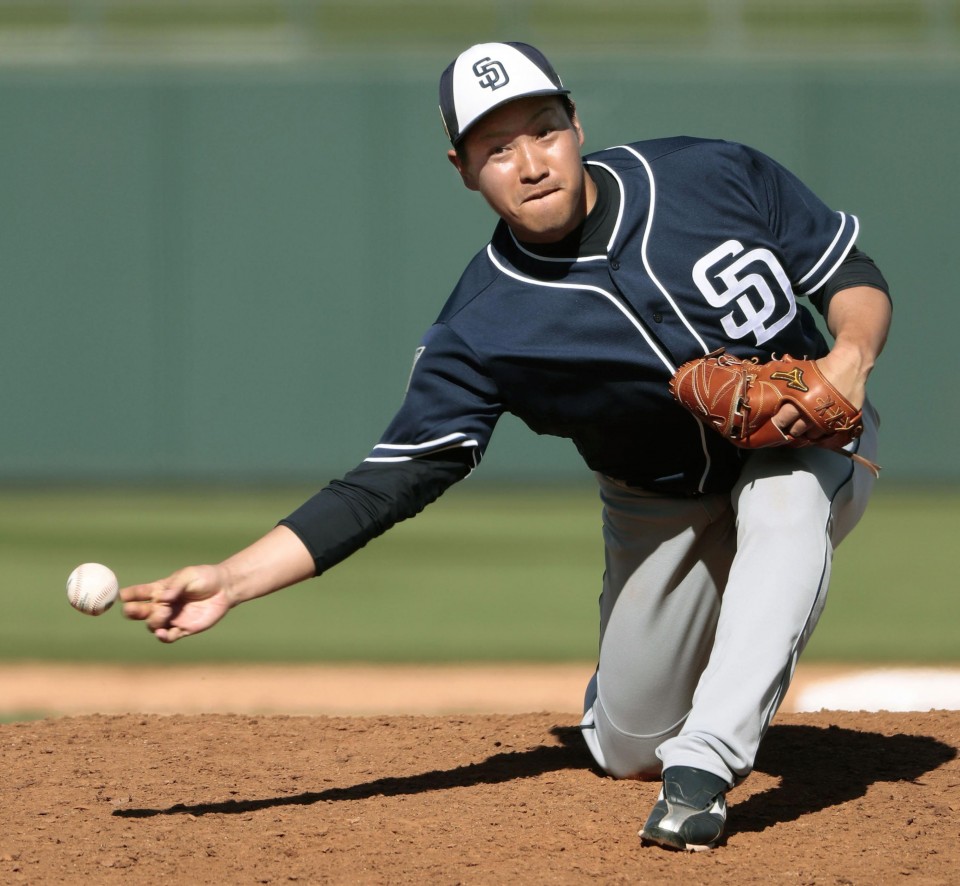 "About the only English words I've used much are 'good' -- and 'better,'" he told Kyodo News earlier this month.

"Of course in Japan there are players whose words you don't understand. Having contact with other players, particularly foreign players, is something I enjoy."

Austin Hedges, who became San Diego's No. 1 catcher last year, said Makita's English effort gives him something to work with.

"We're both learning each other, but he's learning everybody, so I can only imagine that's a tough position to be in. He works hard and he's trying and he's doing his best to learn the culture, to learn how we play baseball."

"He's doing such a great job at adapting. It comes down to communication. He's learning some English words, and I'm learning some Japanese words, words of (reassurance). I feel like it would go a long way with him if I could show him I could communicate in his language."

The Padres are in a strong position to aid the 33-year-old Makita. Manager Andy Green spent time in Japan with the Nippon Ham Fighters, while three former big league pitchers from Japan are also on hand.

"It's reassuring having Otsuka and Saito and Nomo here, but in the end, it's up to me," said Makita, who was the 2011 rookie of the year in Japan's Pacific League after making the transition from corporate ball. 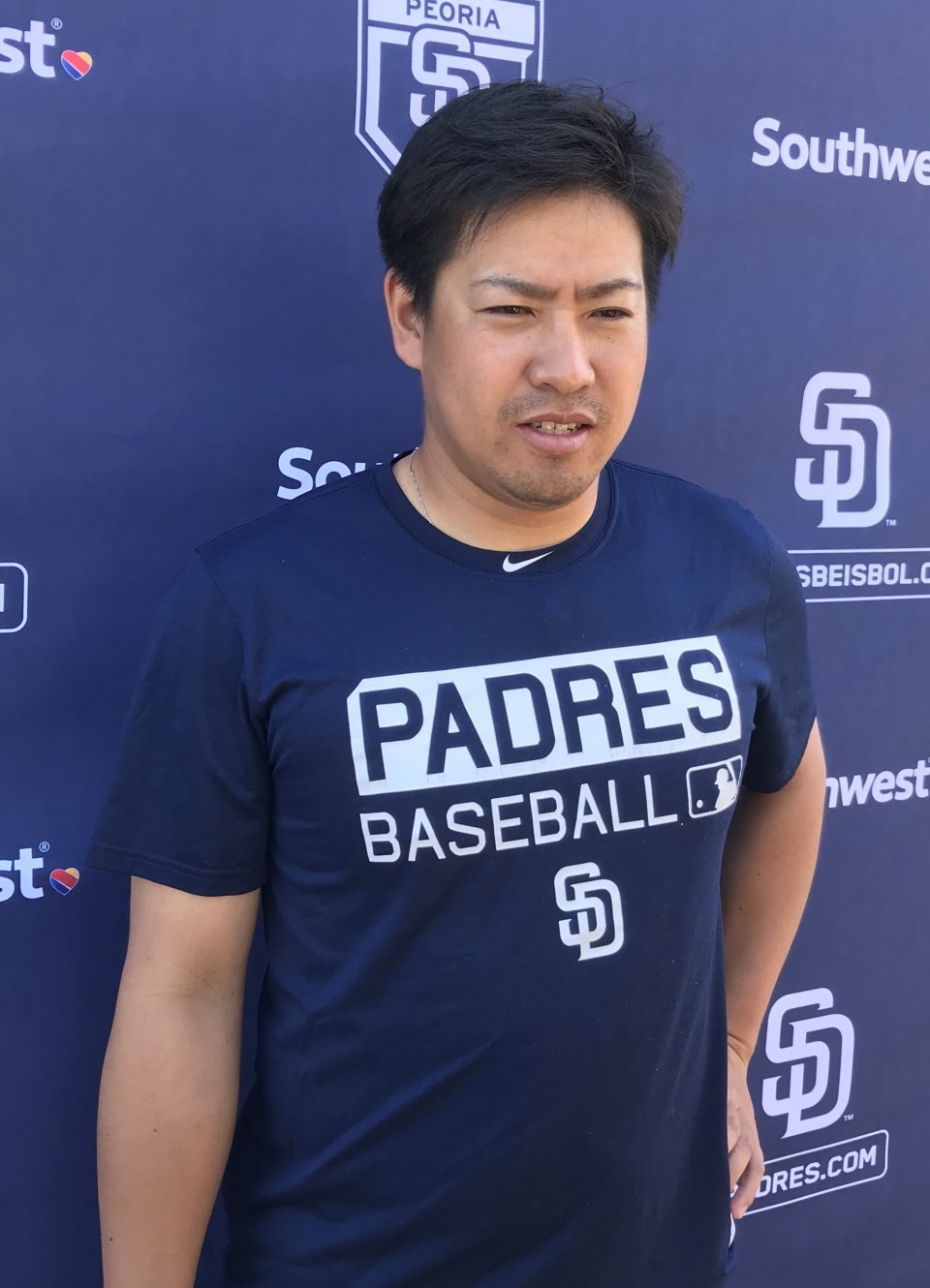 "I achieved results in Japan. But here I have achieved nothing. I turned pro out of corporate league ball, but went into my first year believing I could contribute. Now, of course, I also believe I've got something to contribute."

"Nobody can do this for me. I'm here because I believe I can get it done pitching my way."

Hedges believes that as long as he and the Padres' other catchers are on the same page with Makita, then his unique style will be a difference maker.

"The unique thing about his fastball is that it rises," Hedges said of the ball Makita releases from shoe-top level. "It stays on that positive trajectory. That's going to be a huge pitch for him, because as a hitter, you're used to seeing everything on a downward angle. Our swing is trained to hit something on a downward angle, so guys are going to have to make swing adjustments on him because the angles don't match up."

Makita compliments his low-speed fastball with even slower pitches, particularly his curveball.

"I've never seen a pitch thrown with that much arm speed that moves so slowly. Guys are going to have a hard time waiting to stay back on that pitch," Hedges said of Makita's submarine curve.

Catching Makita, Hedges said, is both a challenge and a pleasure.

"It's going to be different because not many guys throw from that angle," Hedges said. "With your normal guy, you can go watch film and compare guys, but there's not really anybody you can compare to Makita. He's so unique and so special, that we're going to have to do a lot of learning together in spring training to learn how to attack guys, and make sure what he sees, I see. So it's going to be huge for us to be on the same page now so that by the time the season starts, he can trust me and I can trust him to be on the same page."

"When guys have special abilities out on the mound, it's a pleasure to catch them. It's something you don't get to see every day. Just catching his bullpens is fun. I've caught thousands and thousands of pitches in my life, but I'm doing something now for the first time, dealing with something I've never seen before."

Hedges isn't the only Padre enjoying Makita's quirky style. As he warmed up playing catch with veteran reliever Tom Wilhelmsen on a sunny early March morning in Peoria, Arizona. Wilhelmson threw several underhand, drawing a shake of the head from Makita in mock disapproval. 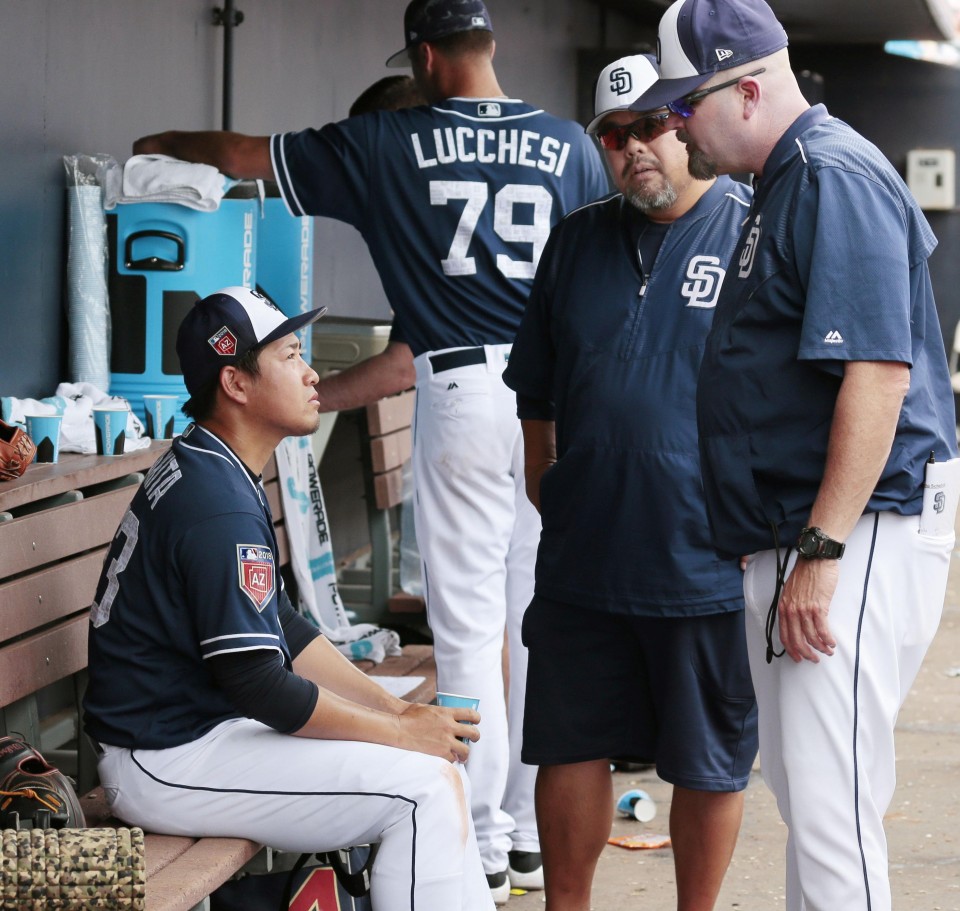 "Everybody tries to imitate the way I throw. But no matter how hard they try, their arms are just a little too high," Makita said. "Even the regular position players, they see my submarine slider and they try to throw it. But their effort to mimic my delivery contributes to the communication."

"It's fun, and gives me a sense that my presence here is recognized, and through the process of communication, it feels like I am becoming a part of a cohesive team, and an element of that is having fun together."

And though he is there to work, fun is certainly part of Makita's equation.

"Back home, Japanese players get obsessed with results and get down when they fail, but the foreign players seem to be able to have fun even if they don't succeed," he said. "Of course results are critical. Getting results is my job, but if you are not enjoying yourself, I'd have to call that a pretty narrow existence."