A tree cutting ceremony took place in the central Japan town of Shirakawa on Tuesday to mark the start of lumber procurement for a communal facility in the athletes' village of the 2020 Tokyo Olympics and Paralympics.

Shirakawa in Gifu Prefecture is one of 63 local governments providing wood for the Village Plaza as part of an initiative by the Tokyo Games organizing committee to involve all parts of Japan.

Beginning with a prayer for safety, the ceremony featured the town's mayor chanting and beating a state wooden axe against the trees. Chainsaws were then used to cut down a Japanese cypress tree 28 meters high and 50 centimeters in diameter.

A representative from the Tokyo Organizing Committee of the Olympic and Paralympic Games presented a wooden shield made of local cypress to the town. The representative said shields would be given to each local government participating in the project. Shirakawa was the first municipality to conduct such a ceremony.

Once built in Tokyo's Harumi waterfront area, the Village Plaza will be part of the athletes' village and will be constructed out of domestic wood to showcase Japan's culture and traditions, and serve as an example of environmental sustainability. 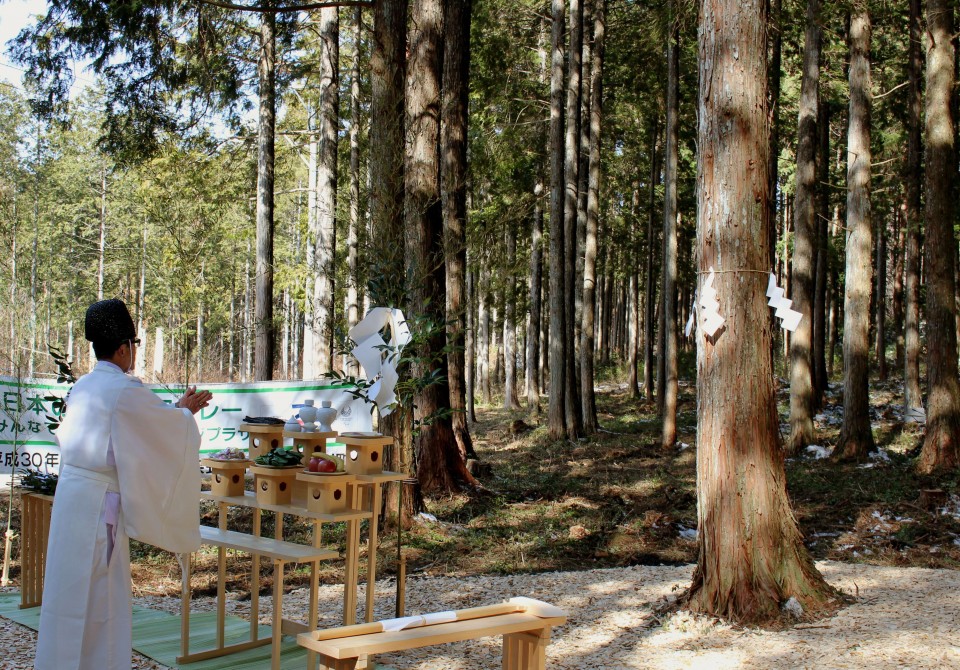 It will be equipped with a cafe, florist and media center for interviews with athletes. The venue will be dismantled immediately after the games end. The lumber will be returned to the municipalities so they can derive a legacy from the games.

Each local government will be responsible for the cost of procuring, processing and transporting the wood before the games, and will also repurpose it afterwards.

The wood, to be marked as "Used in Village Plaza," will not be made available for commercial purposes. Instead, authorities will be able to use for public buildings and benches.