A boardinghouse at a World Heritage-listed Buddhist temple in Japan's old capital Nara has been serving as a place for the families of seriously ill and disabled people to take a much-needed break.

Last summer, 26-year-old Misato Komiyama from Maibara in Shiga Prefecture, western Japan, and her parents stayed at the boardinghouse on the premises of Todaiji, a temple complex known for the world's largest bronze statue of Buddha.

It was the first family trip in around five years for wheelchair-bound Komiyama, who is paralyzed in all four limbs and sometime requires a ventilator.

On the first day of the family's overnight trip to celebrate her birthday, community volunteers at the boardinghouse prepared a special meal for them.

Later, she was taken to nearby Nara Park where she fed rice crackers to the deer. The following day, the family visited the temple's Great Buddha Hall.

The boardinghouse, founded in September 2010, aims to improve the quality of life of seriously ill people, especially children with severe disabilities, by providing support to them and their families.

Kiyotaka Tomiwa, 67, a medical doctor who heads the Todaiji Medical and Educational Center, took the lead in establishing the boardinghouse. "You should know that your life can still be wonderful with your family even if you have a disability or have not much time to live," Tomiwa said, adding, "I hope the parents will feel thankful for their children." 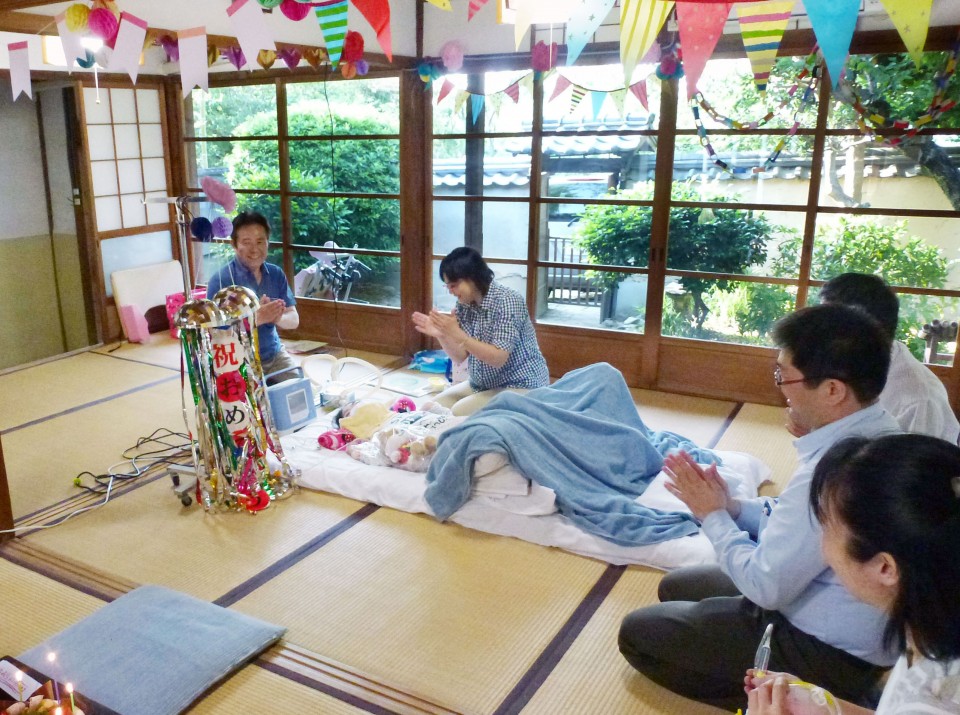 To stay at the house for a day or overnight, families need to be referred by their doctors. But services are free as it relies mainly on donations.

Doctors and nurses are on hand in case of emergency. Community volunteers clean the boardinghouse and make meals using vegetables from its garden and food delivered by local restaurants.

Tomiwa said there are not many such boardinghouses in Japan and some families had told him they were able to relax.

"It was a precious time for us," Komiyama's mother, Keiko, 54, said. "My daughter looked so happy and everything was new to us."

Keiko Komiyama said she constantly worries about her daughter's condition as the ventilator could beep at any time to warn of an abnormality. She said she can hardly sleep when her daughter is not well.

"It has been really hard for us but we have never felt unhappy," Keiko Komiyama said. "Misato has given us a lot of happiness and is a treasure we never want to lose."

The facility is not barrier free. Four people were required to lift Misato Komiyama's wheelchair onto the ramps.

"In everyday life we have so many barriers, but our society is designed for each of its members to confront them," Tomiwa said.

"For those with disabilities, the barriers may make their lives a bit inconvenient, but they can be overcome if we support each other," he said.

Families can only use the boardinghouse once. In the seven years since it opened, more than 80 families have stayed in it. For some it was their first-ever family trip, according to Tomiwa.