Schools in Japan use smartphone, tablet apps to engage a new generation

Educational smartphone and tablet apps are becoming increasingly used in Japanese schools as teachers look to capitalize on what has become many young people's preferred window to the world.

Such artificial intelligence-assisted apps have become prevalent in education, particularly in subjects many Japanese teachers struggle to teach well. 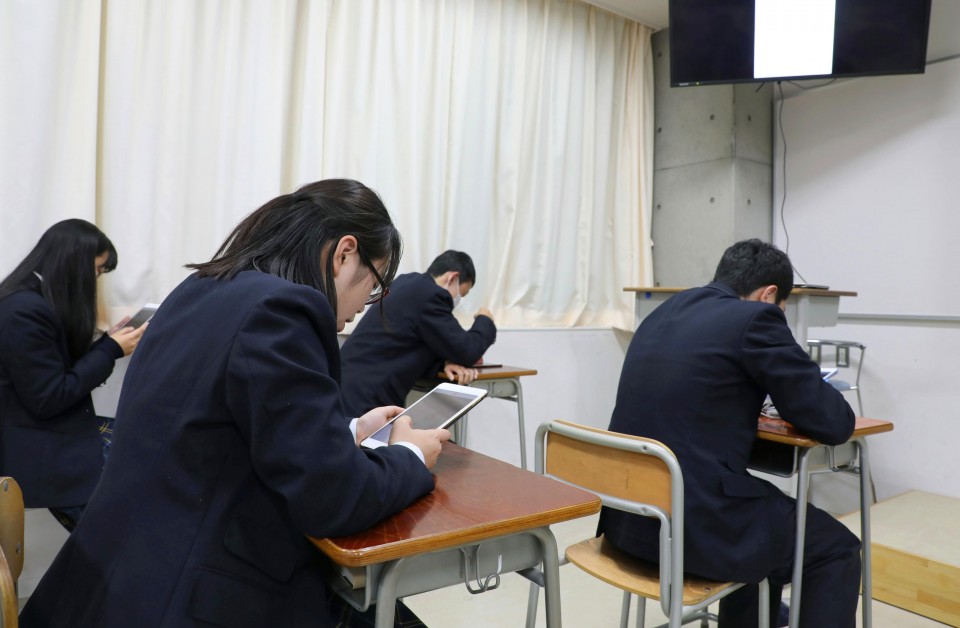 One subject in which Japanese educators need some help is in teaching children English, a task that is all the more important as English speaking skills are due to be included from the 2020 school year in the joint achievement test, part of the country's high-pressure university entrance exams.

The school introduced the app last summer for students wishing to study abroad, and it plans to expand its use to all students in order to prepare them for the new college entrance exam.

An immigration officer in a mock airport customs scenario asks such questions as "May I ask your destination?" or "Do you have your ticket with you?"

After the students give their answers, they are displayed on the tablet screen so it can be checked whether they are correct, and pronounced correctly. 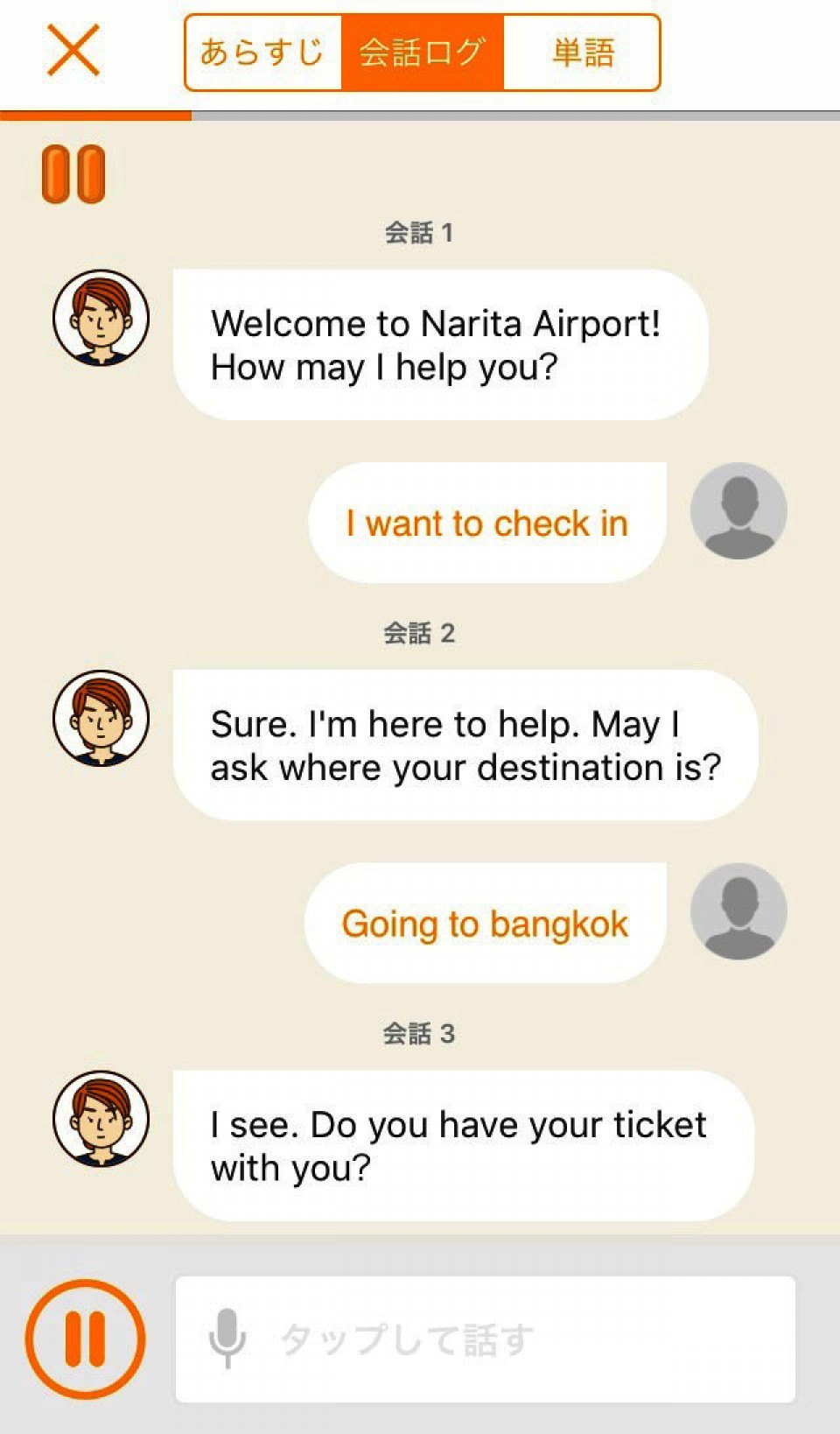 The students said they generally had a positive experience with the app as they do not feel the hesitancy they might when speaking to real native English speakers.

"I get nervous when I speak during a class but this (TerraTalk) makes me relax," a student said. "I feel as if I spoke English in an actual situation," another student said.

For teachers, the app goes some way to making up for the lack of in-class English conversation with native speakers.

"We have an English conversation class taught by a native speaker, but each student is given only a few minutes to speak," an English-language teacher said. "The app is very effective."

Yoshiyuki Kakihara, president of Joyz Inc., the Tokyo developer of TerraTalk, said the app can help users improve their English because it displays the points at which the pronunciation of the user is different from native speakers.

Joyz released TerraTalk as an Android and iOS app for users wanting English lessons in 2016. It offers work and everyday life scenarios and allows users' to role-play conversations.

It has been used at some private high schools, Kakihara added.

Another area where apps could be of great help to teachers is in teaching computer programming with coding becoming essential for elementary school pupils from academic year 2020.

Internet firm DeNA Co. released in October Programming Zemi, a coding app for young children, and demonstrated to the media with a class of first graders who use the app at a primary school in Tokyo.

During the class, pupils assembled blocks displayed on a tablet to enable a virtual character to walk or jump across the screen.

Tomoko Namba, DeNA founder and executive chairwoman, says she hopes the app will help "children clear the psychological hurdles of using a computer (by learning coding)."

Such moves are part of a drive to promote the use of information and communication technology in education.

There were 1.95 million computers used by students at public elementary, junior high and senior high schools in Japan as of March 2016, according to the Education, Culture, Sports, Science and Technology Ministry. The figure means there was one computer per 6.2 students.

As well as the promotion of technology-assisted education, the introduction of apps varies depending on schools, but cram schools are big adopters.

Gakken Study et and Yoyogi Seminar are among the cram school operators using the Studyplus for School app that helps students manage their self-study programs. 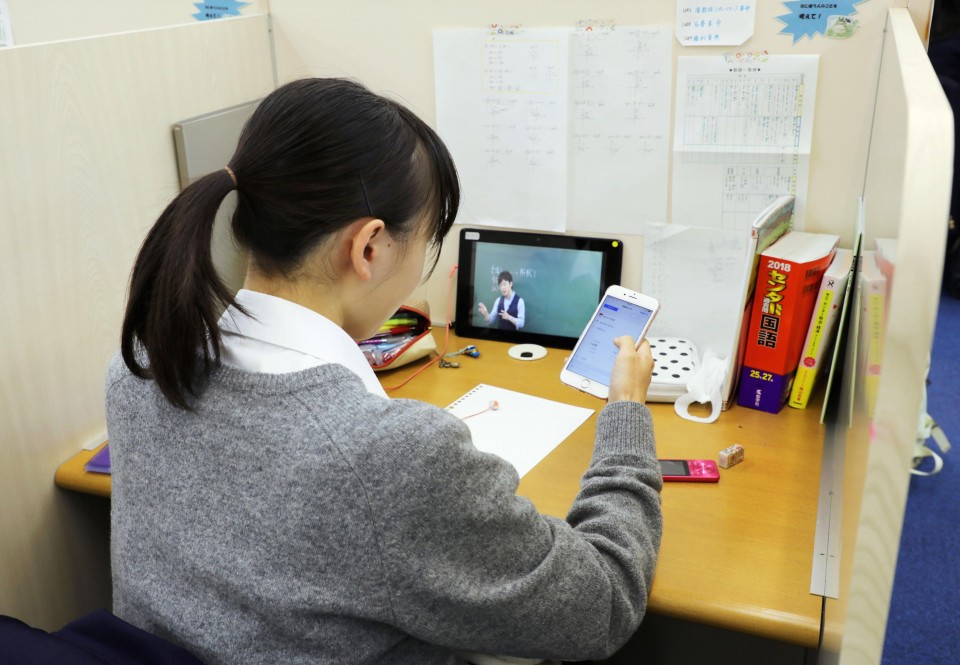 Gakken Study et began using it at two of their schools in Saitama Prefecture last year.

Via their smartphones, students input information on the subjects they study, how much time they spend on each and what reference materials they used.

The app has allowed the cram schools to get a better picture of their students' self-study habits, a Gakken Study et official said.

Gakken Study et plans to use Studyplus for School at all of its 40 locations.

Using the app, students can find out how much their fellow students are working, increasing their motivation to catch up or better their friends, a representative of the Studyplus app said.