The leaders also reaffirmed the need to maximize pressure on North Korea to address its nuclear and missile threats, while underscoring their determination to seek the signing soon and entry into force of the Trans-Pacific Partnership free trade agreement.

"Toward the realization of the 'Free and Open Indo-Pacific Strategy,' I agreed with Malcolm to deepen collaboration and cooperation," Abe said at a joint press conference following their talks in Tokyo, referring to Japan's regional diplomatic policy.

Abe and Turnbull confirmed their commitment to realizing a rules-based maritime order amid their wariness about Beijing's expansionary ambitions in the East and South China seas and Indian Ocean. But they did not mention China by name in their joint press statement. 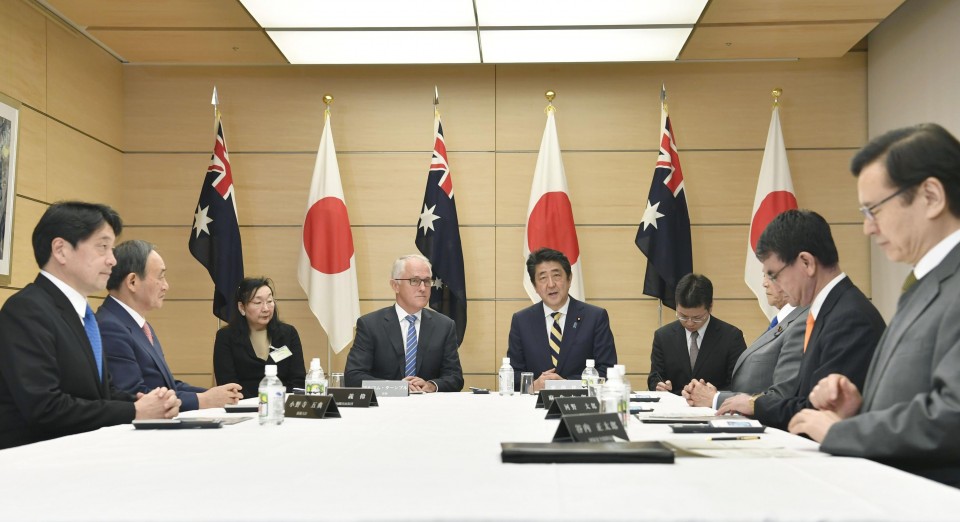 Japan and Australia share a vision for the Indo-Pacific region as the Australian government cites the key phrase of a "stable and prosperous Indo-Pacific" as a main pillar in its Foreign Policy White Paper, released last year for the first time in 14 years.

Turnbull's Japan visit is taking place at a time when both countries' ties with China have soured. Last week, Tokyo lodged a protest with Beijing after spotting a Chinese naval submarine and a frigate in waters near the Japanese-controlled Senkaku Islands in the East China Sea, which are claimed by China and Taiwan.

Canberra has also been at odds with Beijing over an Australian minister's criticism of Chinese aid pouring into Pacific island nations, arguing it has created "useless buildings."

On North Korea, Turnbull told the press conference, "We've discussed the importance of ensuring that the economic sanctions are enforced rigorously so that this regime is brought to its senses and stops threatening in the manner that it does the peace and stability of the region."

South and North Korea resumed official talks last week for the first time in more than two years and agreed Wednesday that their athletes will march together under a "Korean Unification" flag at the opening ceremony of Pyeongchang Winter Olympics next month in South Korea. 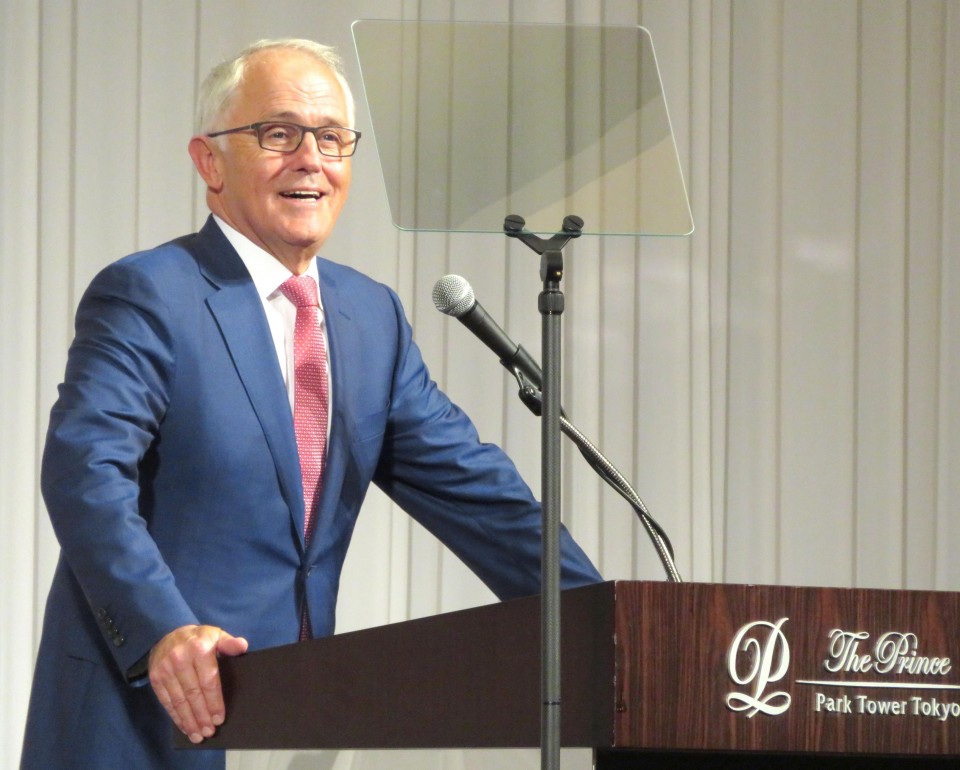 Abe and Turnbull also confirmed an intention to accelerate negotiation of a new security pact stipulating the legal status of military personnel temporarily in the other country for joint exercises, the statement said, adding they will instruct all relevant ministers to conclude the negotiations "as early as feasible."

The envisioned visiting forces agreement would enable the two countries to bring military equipment and ammunition into the other country to make it easier for Japan's Self-Defense Forces and the Australian Defense Force to conduct joint drills.

In January last year, the two countries reached a revised acquisition and cross-servicing agreement, which allows them to provide ammunition, water, food and other supplies to each other.

In a show of deepening bilateral relations, Turnbull attended a special meeting of the National Security Council, becoming the third foreign leader to do so.

Earlier in the day, Turnbull also observed drills by the Special Operations Group tasked with counterterrorism operations, and saw equipment such as an Air Self-Defense Force Patriot Advanced Capability-3 missile interceptor at the Ground Self-Defense Force Narashino exercise area in Chiba Prefecture, east of the capital.

Strengthening bilateral economic ties was also discussed at the summit. Abe and Turnbull agreed to seek to sign the TPP free trade deal as soon as possible.

Japan, Australia and nine other nations have been striving to implement the pact even after President Donald Trump pulled the United States out of it last year. The 11 members agreed on "core elements" of the deal in November when they met in Vietnam.

Speaking at a business lunch earlier in the day, Turnbull said, "The TPP is a down payment on the sustainability of free and open markets at a time when they're under pressure from the combined forces of populism, protectionism and geoeconomics." He said Australia and Japan are committed to finalizing the agreement by March.

Turnbull is visiting Japan for the second time, following his first trip in December 2015. He and Abe last held talks in November on the sidelines of a regional meeting in the Philippines.