A century-old Japanese-style inn southwest of Tokyo that nearly went bust amid outdated management practices has successfully rebuilt its business, thanks to an injection of modern technology.

Jinya is a 20-room hot-spring inn in the Tsurumaki spa resort in Hadano, Kanagawa Prefecture, about an hour by train from Tokyo's Shinjuku Station. Established in 1918, it is known among Japanese "shogi" chess enthusiasts as the venue of countless title matches.

"Jinya had a debt of 1 billion yen ($8.9 million) and was on the brink of bankruptcy when my husband took over as the fourth president in 2009," said Tomoko Miyazaki, 40, who succeeded her husband Tomio, 40, in June as the current president.

Although born into the family-owned business, her husband had no intention of carrying on the company. After completing his studies at Keio University graduate school, he worked as a fuel cell researcher at a major automaker.

But he took over the business when his father died around the time his second child was born and his mother fell ill, effectively making Tomoko the proprietress of the Japanese inn.

"The management was super-analogue at that time," she recalled. "When we took reservations, we wrote them down in a big ledger book. So when someone else was using the book, we couldn't write down new reservations."

A message board was located near the kitchen, but it was hard for the working staff, who were dispersed over a wide area in the spacious inn, to check on a regular basis.

"A customer once requested that the futon in the room not be taken up but since the message was never conveyed to the staff we ended up with a complaint from the guest," she said.

The inn suffered a serious slump when corporate group tours fell sharply in the wake of the global financial crisis triggered by the collapse of U.S. investment bank Lehman Brothers Holdings Inc. in 2008.

Jinya saw its revenue plunge to 290 million yen in fiscal 2009 from around 500 million yen in previous years. The inn had 20 full-time employees and 100 part-time workers and their work hours were recorded in a notebook. 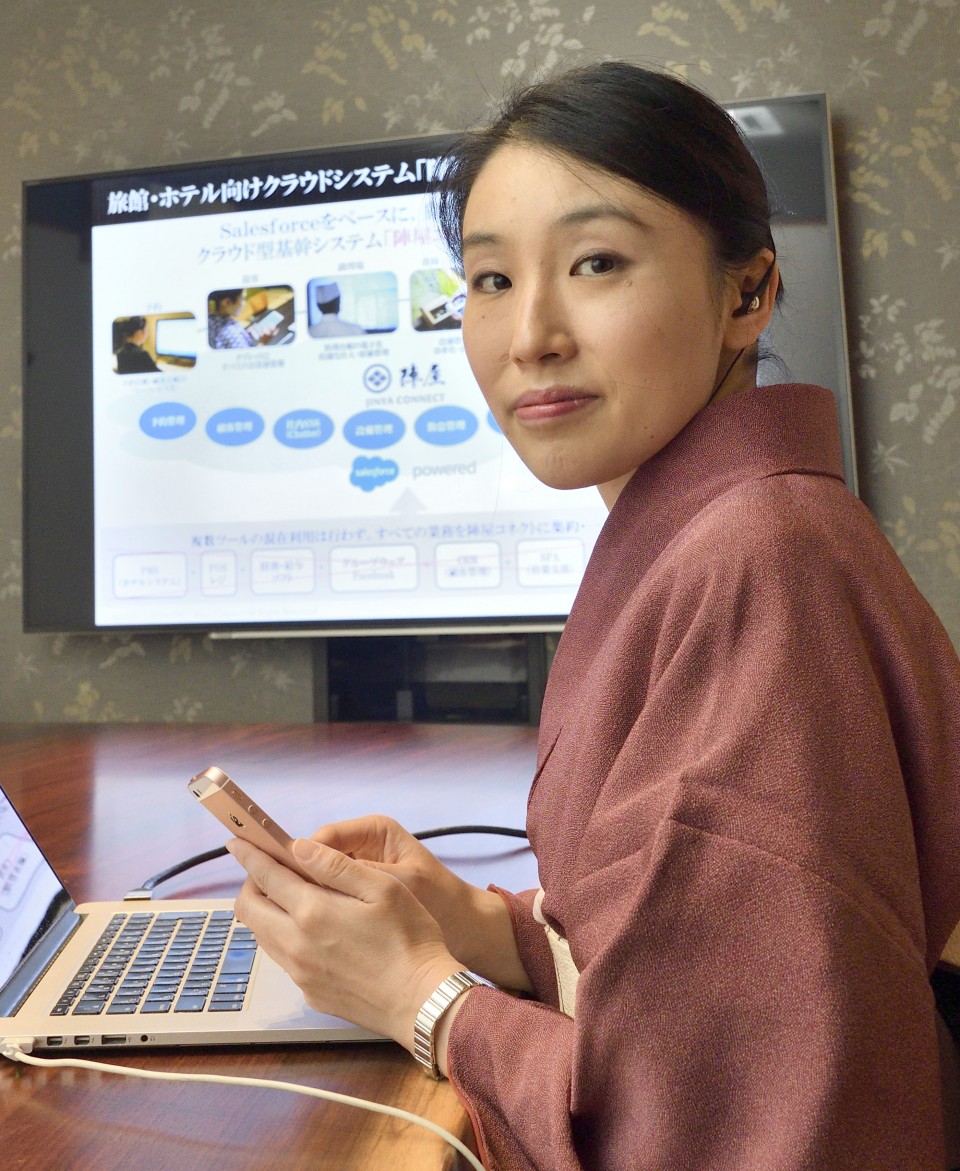 "We thought they were working too much overtime, but we didn't really have a handle on their working hours and were burdened with labor costs," Miyazaki said.

Tomio, who was president at the time, later formulated a system called "Jinya Connect" in 2010 to introduce fundamental improvements with everything from customer data and reservations to food price management, accounting and an email bulletin board.

Nowadays, all workers wear earphones and carry smartphones or tablets to communicate the arrival of guests or the times to serve meals, for example.

Not only can all staff members immediately hear what is being said but the conversations are automatically converted to text format on their respective devices -- allowing them to check previous conversations and eliminate the chance of missed communications.

"At first it took 15 minutes for part-time employees in their 70s to log in. But everybody made great efforts to learn the system because they have to log their work hours by smartphone or tablet in order to get paid," Miyazaki said.

The inn was also able to do away with time-consuming staff meetings since all messages are conveyed by company chat, and the use of computers for automatic computations eliminated the need for an accounting section.

Streamlining enabled Jinya to cut its workforce to 40, 25 of whom are full-time employees. The inn says the quality of service has improved due to the increased proportion of regular staff.

To streamline even further Jinya stopped accepting guests on Mondays, Tuesdays and Wednesdays, when it has a relatively small number of guests -- a rare move for a Japanese inn. This became a major reason for young people applying for jobs there. 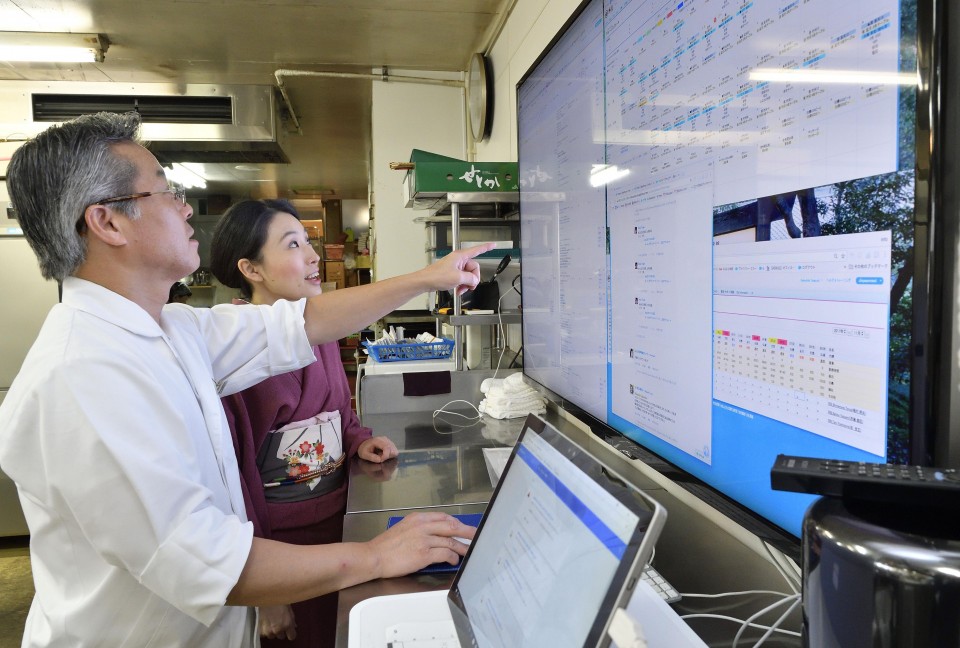 Jinya Connect has been sold as a cloud-based management system for hotels and inns and has been adopted by 230 facilities in Japan for an initial installation fee of 100,000 yen and a monthly charge of 3,500 yen per employee.

"We once had reduced the lodging expenses, but we have reinforced the bridal business and shifted to prime services now, including high-quality meals," Miyazaki said.

In fiscal 2016, Jinya chalked up 720 million yen in gross revenue sales from the inn, bridal and Jinya Connect businesses.

Miyazaki took over the inn business from her husband after he switched his focus to his family's other business -- heat exchanger manufacturing.

He envisions various upgrades for the inn next year, featuring guestroom baths made from Japanese cypress.