Harumafuji's stablemaster Isegahama said that his wrestler was involved in the attack, the first public acknowledgment of the incident.

According to sources familiar with the situation, Harumafuji was drinking with other Mongolian wrestlers in late October during a regional tour in Tottori, when the yokozuna, angered by Takanoiwa's attitude, struck him with a beer bottle.

On Tuesday morning, Harumafuji, a nine time tournament winner, was reluctant to address the report but later submitted paperwork to pull out of the ongoing Kyushu Grand Sumo Tournament, ending his current bid for a 10th career title.

"Regarding Takanoiwa's injury, I sincerely apologize for causing trouble to his stablemaster, his stable, the Japan Sumo Association and my stablemaster," Harumafuji said.

"I cannot comment further until my stablemaster comes back." 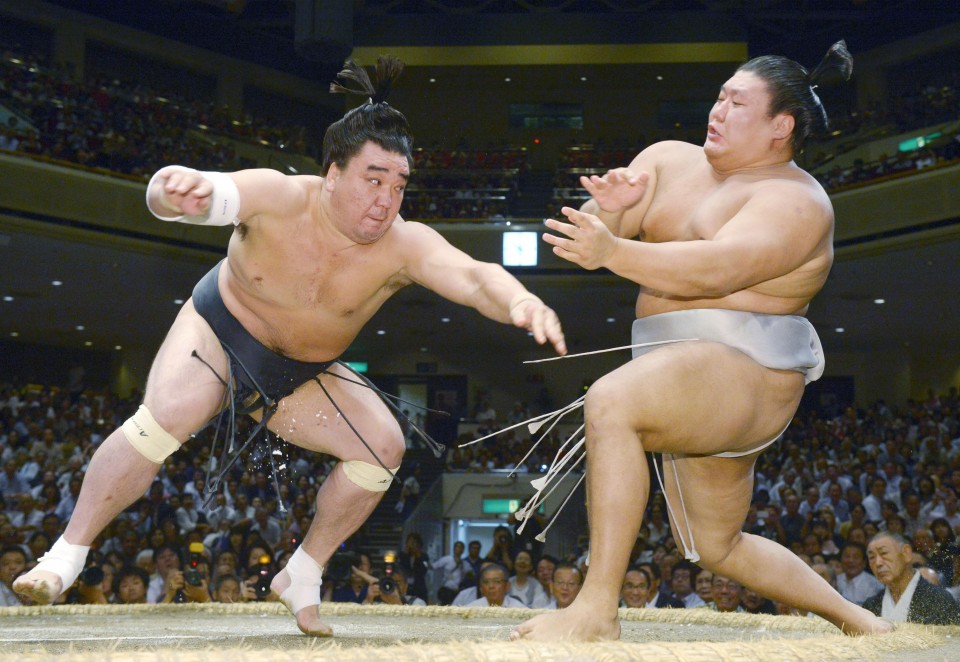 The JSA announced Monday that eighth-ranked maegashira Takanoiwa was diagnosed with a concussion, a fracture at the base of his skull and a cerebrospinal fluid leak among other injuries, and revealed that he had been hospitalized from Nov. 5 to 9.

Mongolian yokozuna Hakuho and Kakuryu, in addition to sekiwake Terunofuji, were among a group of about ten people drinking in Tottori, according to the sources.

On Tuesday morning, JSA executives including chairman Hakkaku gathered at the Fukuoka Kokusai Center to confront Harumafuji and the two stablemasters.

The governing body said a crisis management team will investigate the case but will not hand down its ruling or punishment during the Kyushu tournament.

Meanwhile, Takanoiwa's stablemaster Takanohana said he had earlier filed a police report in Tottori. The police started their investigation, including whether there were disputes between Harumafuji and Takanoiwa that may have triggered the assault, other sources said.

Takanoiwa was one of the early withdrawals from the Nov. 12-26 tournament. He is expected to miss the entire meet and be demoted to the lower juryo rank at the next meet in January.

Since his professional debut in 2001 under the ring name Ama, Harumafuji has won nine titles, his last coming at the autumn meet in September when he was the only yokozuna competing.

In September 2012, he earned promotion to yokozuna, becoming the third consecutive Mongolian-born wrestler after Asashoryu and Hakuho to achieve the top rank.

In his bid for a second title this year, Harumafuji lost his first two bouts in Fukuoka before withdrawing citing injury. It is the eighth time he has pulled out of a meet.

Yokozuna Kakuryu withdrew earlier due to injury, leaving only two grand champions -- Kisenosato and Hakuho -- with 13 days remaining at the sellout tournament.

"He put on a strong performance to prove his worth as yokozuna in the last basho so it's disappointing that he has to pull out this way. It throws a wet blanket on an exciting tournament," said former NHK sumo announcer Kunihiro Sugiyama.

The incident sent shock waves across Japan, reminding fans that the ancient sport has yet to escape its reputation tainted by scandals over match-fixing, violence and bullying.

In 2010, Mongolian yokozuna Asashoryu retired from the sport following allegations that he attacked a man outside a Tokyo nightclub in the middle of the New Year tournament.

In 2007, the police arrested stablemaster Tokitsukaze and three wrestlers for beating 17-year-old Tokitaizan to death using a beer bottle, a wooden stick and a metal bat. The junior wrestler, whose real name was Takashi Saito, died from shock after suffering multiple injuries.