U.S. military to ground CH-53 helicopters after accident in Okinawa

The U.S. forces in Japan will ground all CH-53E helicopters to confirm their safety after the same type of aircraft crash-landed near a U.S. military training area in Okinawa on Wednesday, Japanese Defense Minister Itsunori Onodera said.

The minister said that Maj. Gen. Charles Chiarotti, deputy commander of U.S. Forces Japan, told him of the decision during their talks in Tokyo on Thursday. An official of the Defense Ministry's local bureau, meanwhile, said the accident site was found to have been about 300 meters away from residential houses.

The Japanese and U.S. governments apparently decided to act quickly to address local concerns in a bid to minimize any repercussions from the incident with a general election in Japan slated for Oct. 22.

The U.S. Marine Corps in Japan separately announced a four-day operational halt for the CH-53E transport helicopters stationed in Okinawa. The southern island prefecture hosts the bulk of U.S. military facilities in Japan.

In Wednesday's accident, the helicopter caught fire in midair during a training flight and burst into flames as it made an emergency landing near the U.S. Northern Training Area on the main island of Okinawa. None of its seven crew members or local residents was hurt.

The U.S. Naval Safety Center has rated the accident as a most serious "Class A" mishap, saying that a fire broke out in one of the aircraft's engines, forcing it to make an emergency landing.

Okinawa Gov. Takeshi Onaga expressed his dismay over the incident as he visited the site in the village of Higashi, saying, "I felt disconcerted at seeing the sudden change from ordinary life to this horrible situation. I feel sad."

In Tokyo, Onodera told Chiarotti the accident was "deplorable" and had caused "considerable anxiety among the residents living nearby and other people in the prefecture."

The minister also urged the United States to clarify the cause of the accident, provide detailed information and take thorough safety measures, noting that the crashed aircraft is a variant of the one that crashed in 2004 at a university in Ginowan city in Okinawa.

Chiarotti told Onodera that the helicopter made the emergency landing after smoke, apparently from the engine fire, made its way inside. The aircraft headed to an area where there were no houses, he added.

He also said the U.S. military is aware of the concerns of local people and will consider measures to prevent such incidents.

The CH-53E helicopter belongs to Marine Corps Air Station Futenma in Okinawa. Its crash-landing is the latest in a string of accidents involving U.S. aircraft in Okinawa, including the Osprey tilt-rotor aircraft.

People in Okinawa have long been frustrated with noise, crimes and accidents connected to U.S. bases.

Prime Minister Shinzo Abe ordered the Defense Ministry and the Self-Defense Forces to use their expertise in looking into the cause of the incident rather than solely relying on U.S. investigations, a senior government official said.

Local police dispatched officers and cordoned off the accident site, investigating the case as a possible violation of a Japanese law on endangering aviation.

But it remains unknown whether Japanese authorities can probe the cause as they do not have the power to search or seize U.S. military assets without consent under the Japan-U.S. status of forces agreement.

The Okinawa prefectural government said it had tried to conduct some environmental tests Wednesday night at the accident site, suspecting the helicopter may have been equipped with a safety device that contained a low-level radioactive isotope, but its officials were denied entry by the U.S. military.

The CH-53E is a large transport helicopter used by U.S. Marines. It has three engines and can carry up to 55 personnel.

The Northern Training Area, straddling the villages of Higashi and Kunigami, has helipads that are also used by the Osprey aircraft and some of them are located close to residential areas. 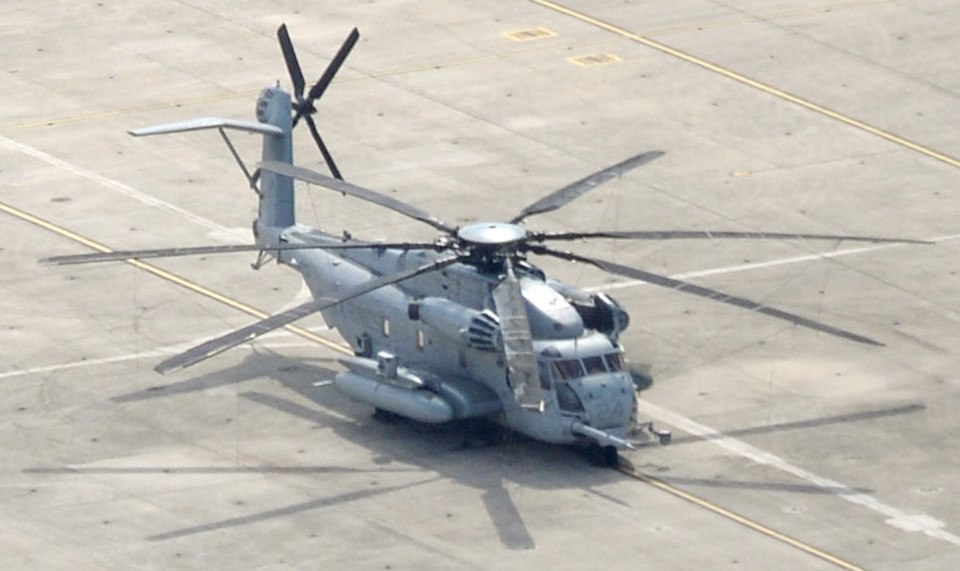