Imagine ordering a hamburger and getting served dumplings instead. Or being escorted to your seat by a waitress, only to end up having to take the order yourself. Chances are such mix-ups might leave a customer bewildered or even irked.

But not so in this Tokyo pop-up restaurant, where waiters and waitresses, all of whom have dementia, have the customers' blessing to make mistakes. Instead of a frown or rant, the servers are greeted with smiles and laughter.

"The Restaurant of Order Mistakes" is the brainchild of Shiro Oguni, a Japanese TV director, whose aim is to deepen awareness of dementia and change perceptions about the condition.

The pop-up first opened in June, and had a second run for three days from Sept. 16.

For Japan, with its rapidly aging population and a growing number of dementia sufferers, taking a leading role in confronting the problem seems only natural.

Oguni said the idea behind the restaurant is for people to learn more about the condition and reflect on it. For his part, he knew little about dementia until he started researching it for work.

"More than the image that dementia is scary, worrisome and dangerous, the words I often hear from diners are positive -- 'cute,' 'funny,' 'happy to be with,' and 'comfortable,'" Oguni, 38, said in a recent interview.

He said that while "dementia is an extremely grave issue," he finds it reassuring to hear such positive comments.

Dementia refers to a broad category of symptoms affecting the brain, including memory loss and impaired judgment caused by damage to nerve cells. While slowing the progress of the condition is possible, there is no known cure or established treatment to address the root causes. The most common type of dementia is Alzheimer's disease.

As the country thought to have the largest aging population, the Japanese government and private sector are stepping up efforts to deal with the soaring costs of providing medical and nursing care to people with dementia.

They are also beefing up measures to prevent traffic accidents involving elderly drivers with dementia and trying to keep tabs on people with the affliction who go missing.

Government statistics show that the number of people over 65 with dementia is expected to jump from roughly 4.62 million in 2012 to 7 million by 2025.

Yoko Kono, 78, and Hideko Maruyama, 82 were among the 17 male and female waiters and waitresses on rotation on Sept. 16.

"It was fun," Maruyama said during a break at the restaurant, which opened at 11 a.m. By the afternoon, she seemed to have forgotten about the waitressing she had done that morning, but she was eager and willing once called upon to serve again.

Echoing her "co-worker," Kono was all smiles when asked about her tasks. The two women said they would want to come to the restaurant as customers.

The pair, who volunteered to serve at the restaurant, are from a facility run by Daiki Angel Help Co., which provides nursing care for the elderly.

"I am just happy if they feel the experience is somehow rewarding," Oguni said, adding he hopes the restaurant can be opened annually, perhaps coinciding with World Alzheimer's Day on Sept. 21.

The three-day run in September was made possible thanks to the roughly 12.9 million yen (about $115,000) that was collected through crowdfunding.

Almost 300 people came, mainly those who helped in the crowdfunding campaign, and the restaurant was sold out every day. 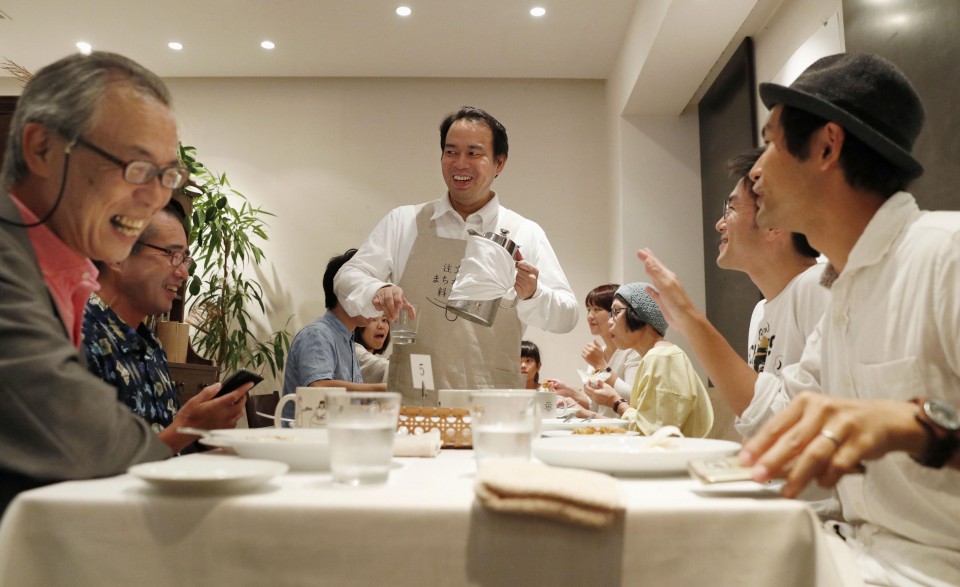 The restaurant, whose name is a play on the title of a Japanese book, "A Restaurant of Many Orders," was inspired by Oguni's experience of being served a dumpling instead of a hamburger one day at a nursing care facility.

Recounting the story, he said he was about to point out the error but stopped himself and thought, "This is the world people with dementia live in. It's no big deal. It's OK to make mistakes."

The project has attracted attention not only in Japan but in countries including South Korea and Australia. Humbled by the interest, Oguni said the organizers are eager to share what they've learned to replicate the initiative elsewhere.

He stressed that organizing a restaurant of this nature is "not that simple," requiring the help of professionals from the restaurant, interior design and social welfare sectors, among others.

It was also important to him that the restaurant fulfilled its function and did not cut corners on the food and other details.

Hideyuki Fujimi traveled all the way from Osaka City in western Japan for a meal and was satisfied with both the food and the service.

"I could feel the hospitality of the staff and the care they took," Fujimi, 35, said. His 35-year-old friend, Naoya Muto, who came from Saitama City, near Tokyo, described the atmosphere as "jovial," and hopes the restaurant project continues.

The point is not that servers forget orders, but the outcomes sometimes draw unexpected laughter, as when a waitress escorted a diner to a table before taking a seat herself. Or when a server asked a diner to take the order of his tablemates.

Other than that, there were no major blunders, proof positive, Oguni said, that even people with dementia can perform tasks under the right conditions.

Yasuko Mikawa, 62, diagnosed with early onset Alzheimer's, played piano. She entertained diners with her performance of Johann Sebastian Bach's "Ave Maria," alongside her husband playing the cello. She also played when the restaurant first opened in June.

Kazuo Mikawa, 69, said he was grateful for the opportunity given to his wife, who had stopped playing piano after being diagnosed with her condition. "It has restored her confidence," he said.

Yukio Wada of Daiki Angel Help and head of the project's executive committee, said he was impressed to see how much Mikawa's performance had improved over the three months.

He believes the restaurant project is not only about people with dementia, but an opportunity to think about how kindness can take root in society.

"It's really not about creating a town that is friendly to people with dementia alone. Rather, it's about how we can create a society where everyone is kind to each other," Wada said.

At the end of the day, the servers may not remember. But the fun interactions and being treated with kindness will not be lost on them and the diners.