Former U.N. Secretary General Kofi Annan said Thursday that the situation in Myanmar's conflict-stricken Rakhine State is becoming more "precarious" and that the international community should play a strong role to support the country in tackling the issue.

Speaking at a press briefing held in Yangon, Annan, chairman of the Myanmar government-appointed Rakhine Advisory Commission, said, "The international community should continue to play a strong, generous and impartial role in support of the national efforts needed to help Rakhine move forward."

He acknowledged tensions between the government and the international community over Rakhine but said this should not become a stand-off and instead the two sides should try to build up mutual trust and cooperation over the issue.

"There is no time to lose. The situation in Rakhine State is becoming more precarious," he added.

Annan arrived in Yangon on Tuesday and submitted his commission's final report to President Htin Kyaw in the capital Naypyitaw on Wednesday. On Thursday morning, he met there with the country's leader, State Counselor Aung San Suu Kyi, and military chief Senior Gen. Min Aung Hlaing.

The advisory commission was formed in September last year under the instructions of Suu Kyi, and consists of six local and three foreign members. It was tasked with finding lasting solutions to the mounting problems in Rakhine involving Buddhist and Muslim communities.

In a statement issued by the commission the same day in Yangon, Annan warned of the risk of fresh rounds of violence returning to Rakhine if the government fails to take strong appropriate actions.

"Unless concerted action -- led by the government and aided by all sectors of the government and society -- is taken soon, we risk the return of another cycle of violence and radicalization, which will further deepen the chronic poverty that afflicts Rakhine State," Annan said in the statement. 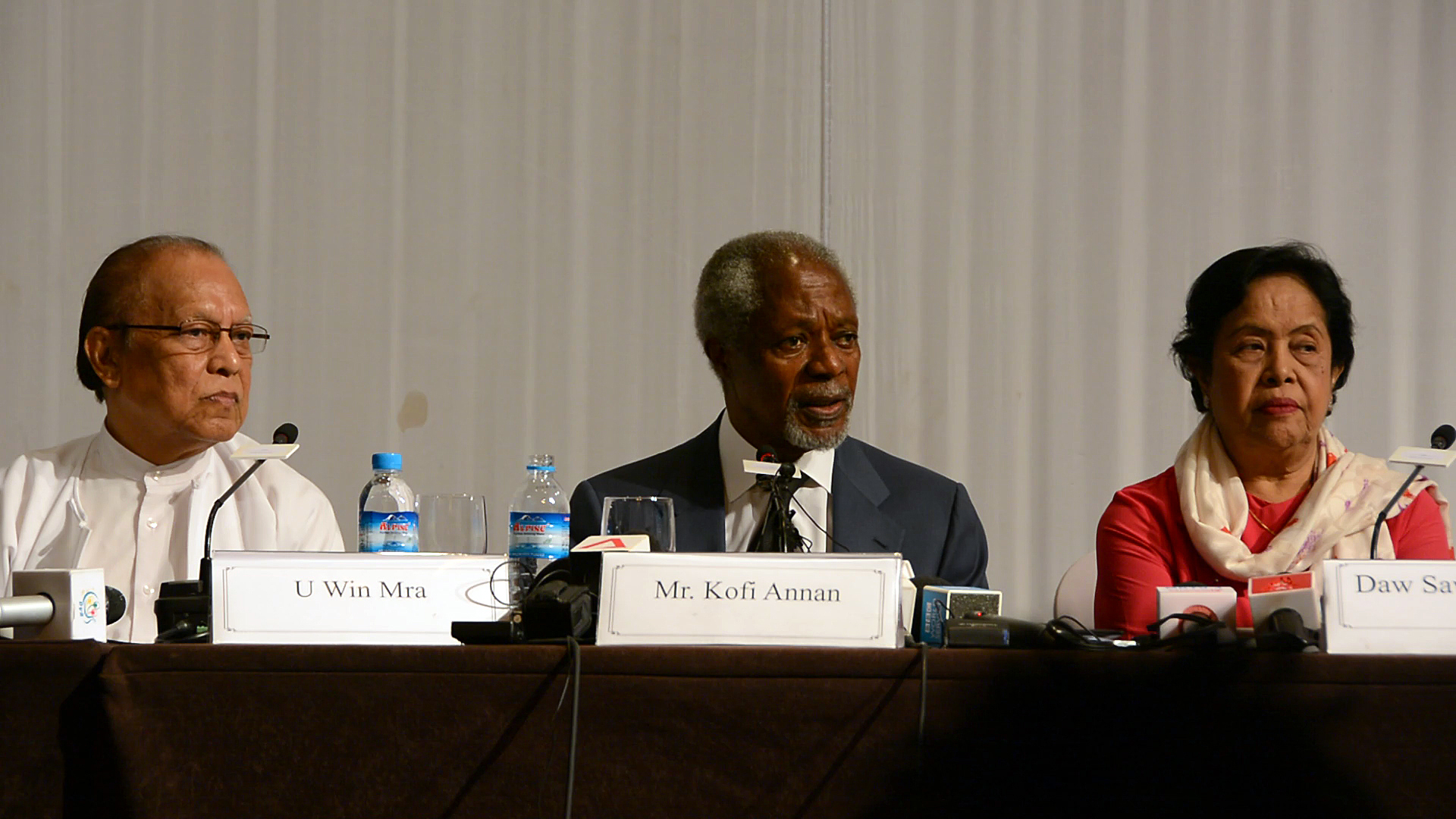 He suggested that the government appoint a ministerial-level official to exclusively deal with the Rakhine issue and implement the recommendations of his commission.

The official would be tasked with coordinating policy on Rakhine and ensuring the effective implementation of the commission's recommendations, Annan said, adding that the appointee should be supported by a permanent and well-staffed secretariat.

The commission's 63-page final report covers 18 categories such as socioeconomic development, citizenship, and freedom of movement, with a total of 88 recommendations for the government.

The overview of the report says recurring conflict in Rakhine is not only a major impediment to national peace and reconciliation in Myanmar, but also a significant obstacle for the development of the state itself, which is among the poorest in the country.

The commission recommends the government to invest heavily in infrastructure in the state, accelerate the citizenship verification process, and ensure freedom of movement for all people irrespective of race and religion.

It also calls on the government to improve living conditions at the camps where hundreds of thousands of Muslim Rohingya people are being housed and cooperate with international partners in carrying out relocation programs while developing a comprehensive strategy to close down all IDP camps in Rakhine. 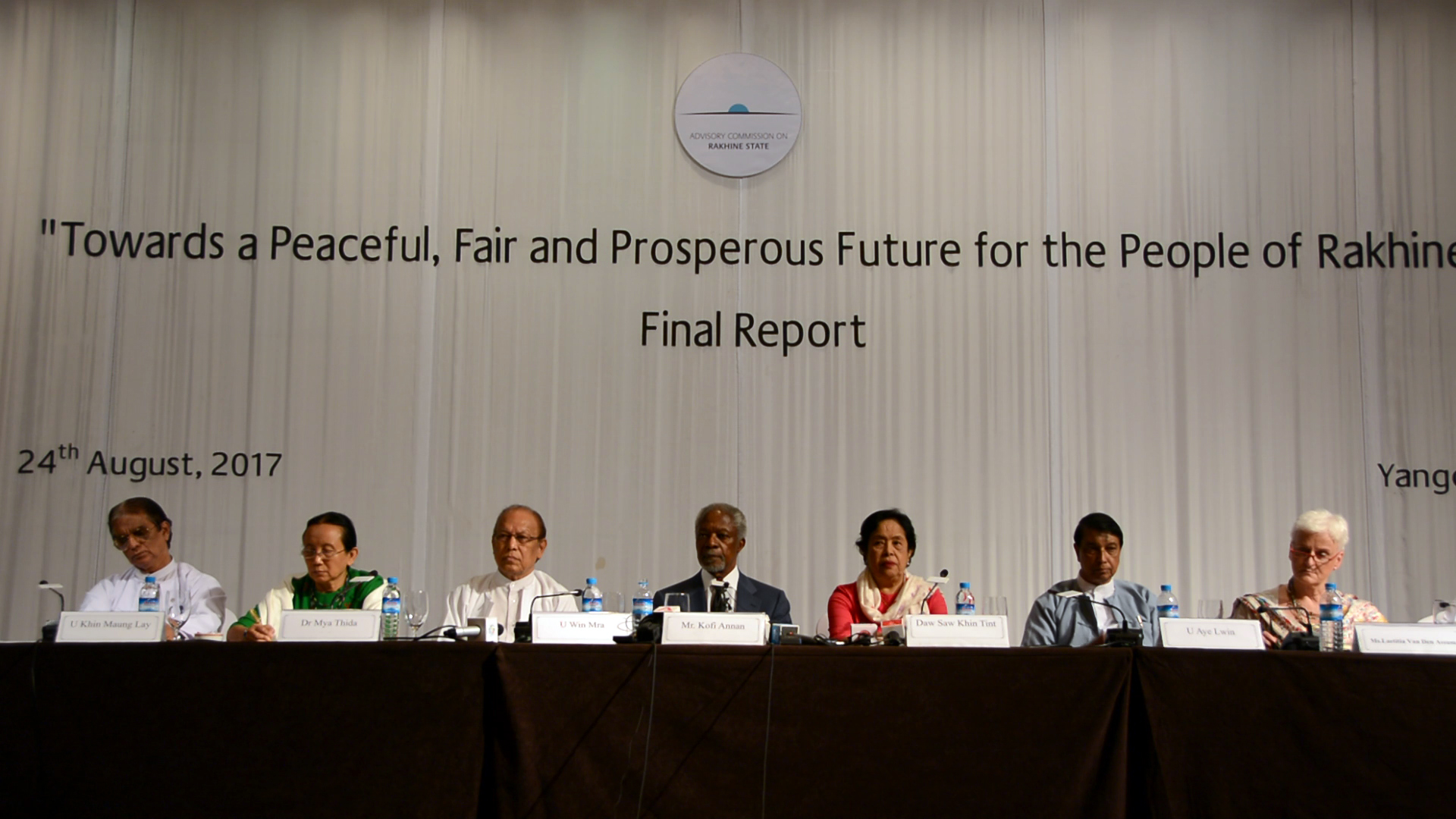 Since 2012, Rakhine, bordering Bangladesh, has been the focus of communal violence between the state's majority Buddhist population and its stateless Muslim minority inhabitants who call themselves Rohingya and are concentrated mostly in the northern part of the state.

The latest round of violence began Oct. 9 last year, when armed assailants, presumed to be Rohingya, attacked border police stations and outposts, killing nine officers and seizing weapons and ammunition.

The military responded with "clearance operations," raiding villages to search for the culprits, arresting hundreds, and causing tens of thousands of people to flee their homes, heading across the border into Bangladesh.

More than 100 people, including 17 security officers, have been killed during subsequent clashes between security forces and Muslim "violent attackers."

In recent months, security forces have discovered several terrorist training camps in northern Rakhine. Recruitment and training of Muslim villagers by the extremists were also being exposed, worrying the government over possible radicalization of extremism.

Nearly 60 civilian villagers, mostly Muslims who are reportedly close to the authorities, have been murdered in northern Rkahine, and at least 33 more have gone missing or been abducted since last October.