Debris extraction method at Fukushima nuclear plant to be revealed

A state-backed entity is expected to soon compile a plan for decommissioning the crisis-hit Fukushima nuclear power plant, unveiling how to extract fuel debris from three reactors for the first time, sources close to the matter said Tuesday.

The Nuclear Damage Compensation and Decommissioning Facilitation Corp., tasked with providing technical support for decommissioning the complex, is mulling proposing a method to remove nuclear debris without fully filling their reactor containment structures with water, the sources said.

It means the debris inside the Nos. 1 to 3 reactors at the crippled Fukushima Daiichi complex is likely to be shaved off gradually with a drill or laser equipment, while pouring water shower under a remotely controlled operation, the sources said.

A method to fulfill reactor containers with water first is effective in blocking radiation from spreading but the entity decided not to adopt the approach as the three reactor containers are believed to have been damaged and water would likely leak. 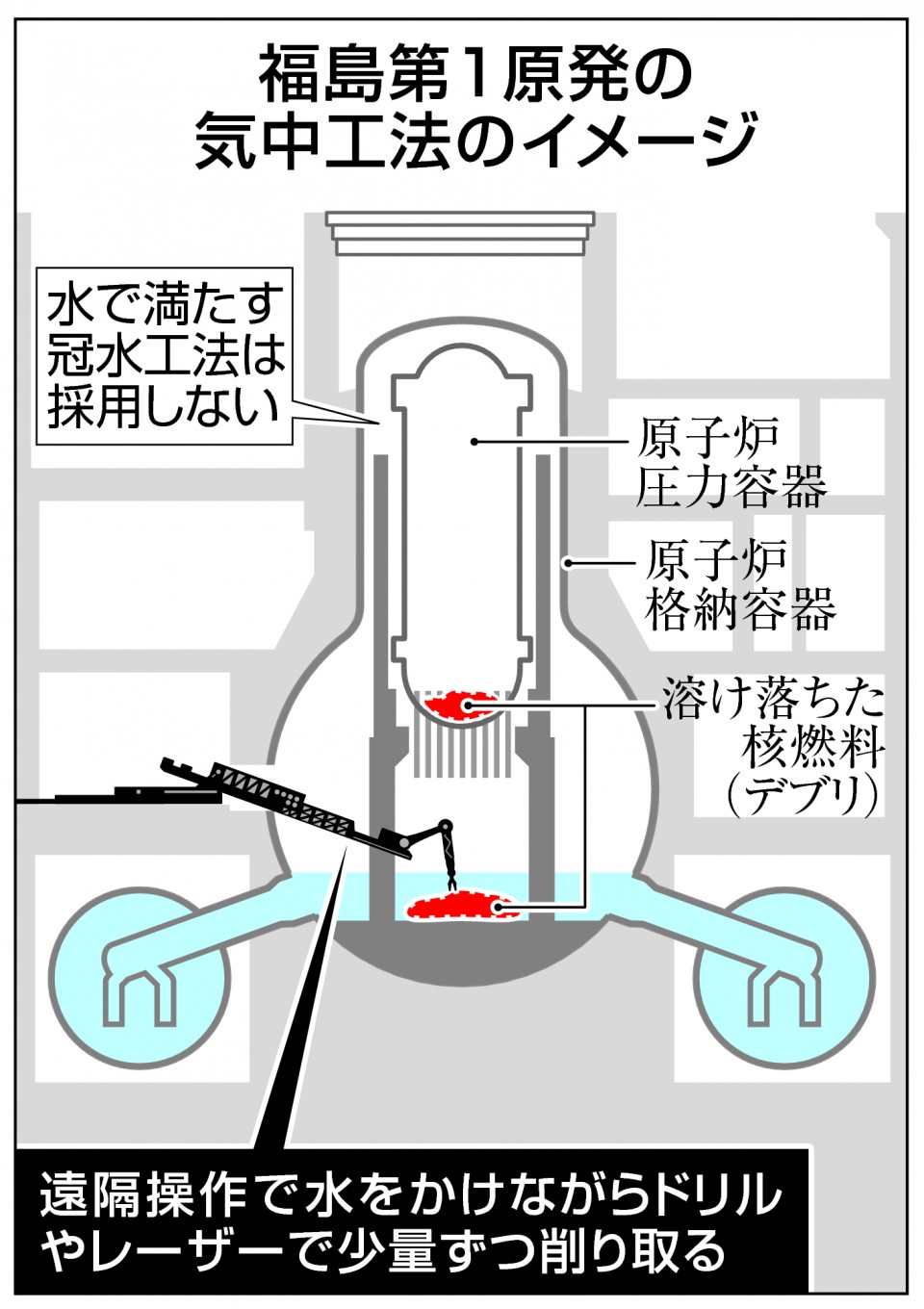 Shown in red is melted nuclear fuel, or nuclear debris. Shown in black is a drill or laser for scraping off the debris.

Under the method the entity currently envisions, some part of debris would remain in the air during the operation so a major challenge facing the debris extraction work is how to shield radiation and prevent debris from flying off.

While debris in the reactors has yet to be directly confirmed and information on the exact locations and conditions is limited, the extraction work, the most difficult part of the decommission project, is expected to proceed in stages from the side of the bottom part of each reactor container while ensuring safety measures, the sources said.

Based on the decommission plan to be compiled by the entity, the government and the plant operator Tokyo Electric Power Company Holdings Inc. are expected to determine a debris extraction scheme for each reactor building this summer and possibly review a road map for decommissioning the complex as well, the sources added.

Decommissioning the crippled reactors is expected to take at least 30 to 40 years.

The current road map calls for completion of a plan on how to extract debris from each reactor this summer and finalizing a detailed method for at least one of the three units in the first half of fiscal 2018 to begin the extraction operation in 2021.

At least 150,000 people in Fukushima were forced to live as evacuees amid radiation fears. While some have returned to their homes, the utility known as Tepco and the government face enormous challenges in scrapping the crippled reactors.

The Nuclear Damage Compensation and Decommissioning Facilitation entity was established after the Fukushima crisis, the worst nuclear disaster since Chernobyl, to help the utility pay damages for the calamity. The state-backed entity holds a majority stake in Tepco.