South Africa had a five-try second-half en route to their 49-3 bonus-point win over Italy on Friday in Shizuoka, taking a huge step towards qualifying to the knockout stage at the Rugby World Cup.

As South Africa head coach Rassie Erasmus called the match a "do-or-die game," his players stayed true to his words by hammering the European squad with seven tries throughout the Pool B match at Shizuoka Stadium Ecopa.

They were playing at the venue that staged Japan's victory over Ireland -- the biggest upset at the tournament so far -- but did not allow Italy to repeat what the Brave Blossoms did last week.

The Springboks took full advantage of the injury-prone Azzurri side, who also played most of the second stanza one man down following a red card to Andrea Lovotti on a dangerous tip tackle. 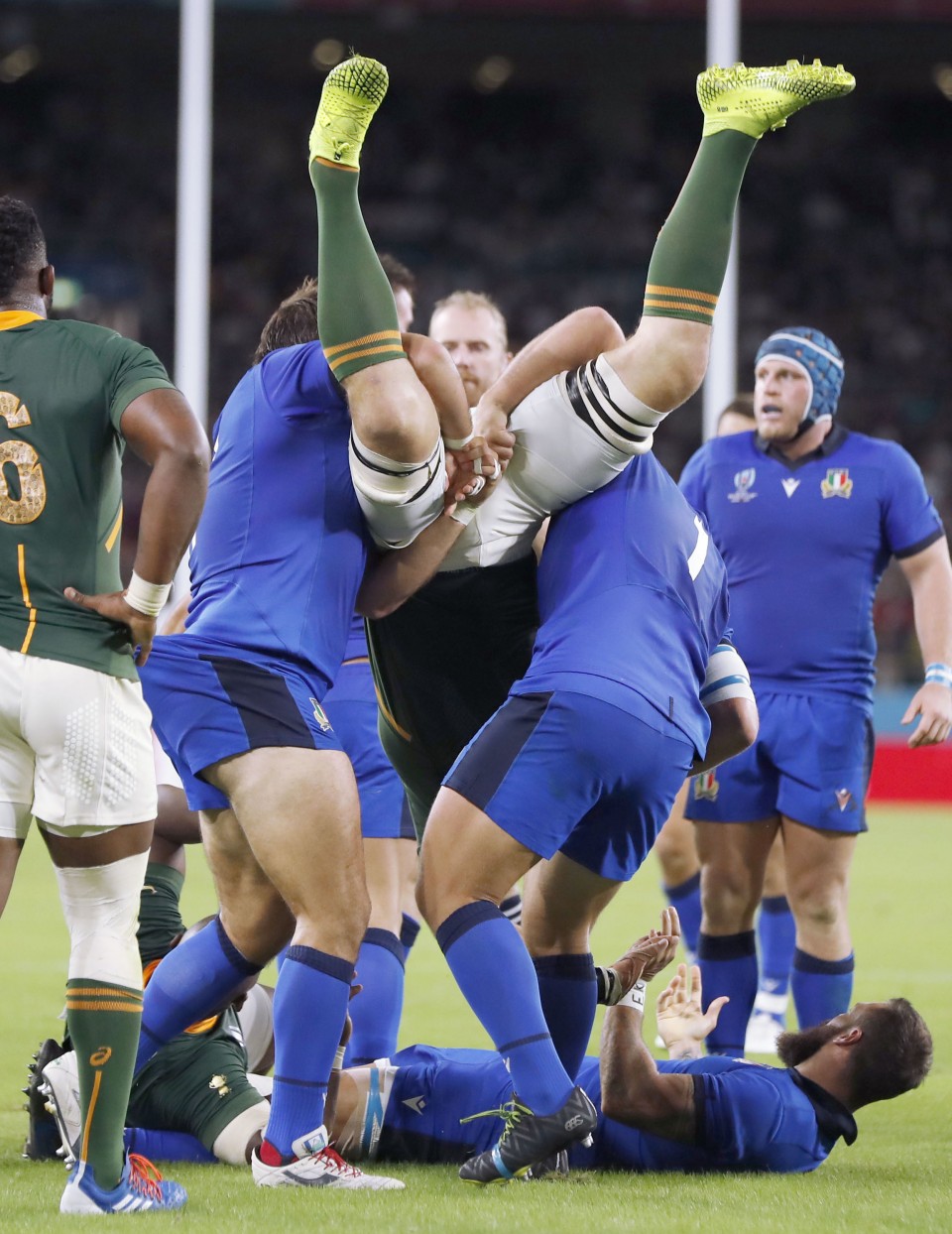 "It definitely wasn't perfect...I thought in this specific test match, our physicality, which is one of our strengths, was very consistent through the game and I am really proud about that," Erasmus said.

In front of a vibrant crowd, fleet-footed Cheslin Kolbe put the Springboks on the scoreboard, receiving a well-placed pass from Willie Le Roux before beating two defenders and touching down at the corner.

Tommaso Allan converted a penalty for Italy from in front of the posts just three minutes later, but Handre Pollard's penalty goal and Mbongeni Mbonambi dotting on a rolling maul put the Springboks up 17-3 at the break.

The Springboks scored five more tries in the second half and earned a bonus point, while Pollard was nearly perfect with his boot throughout the game, nailing four conversions and two penalties. 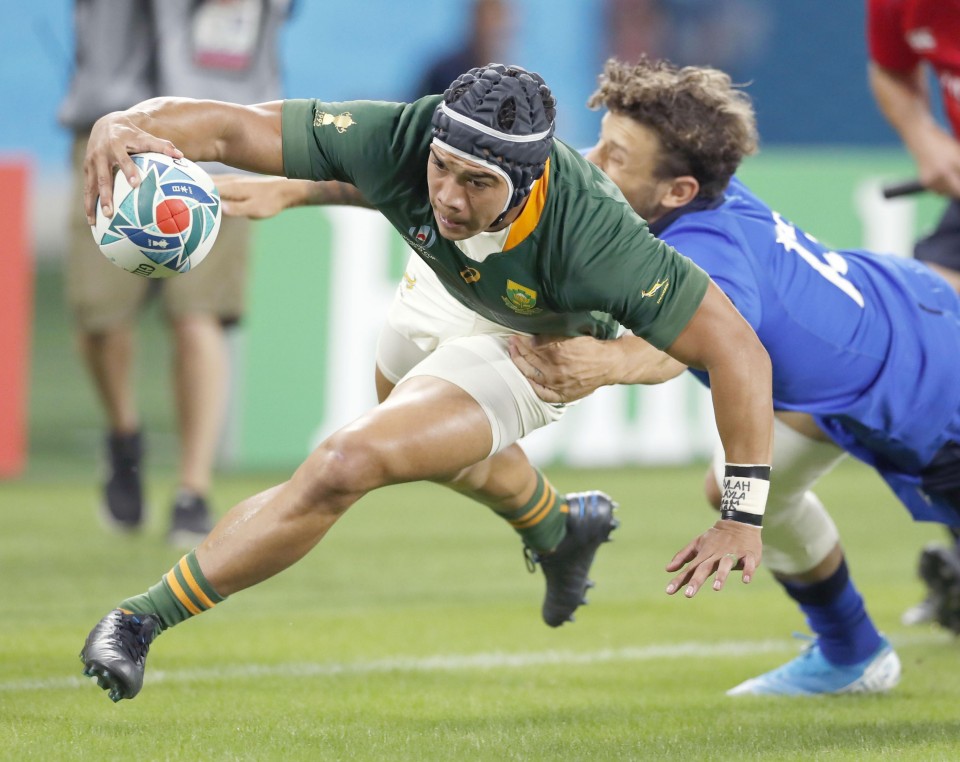 (Cheslin Kolbe (L) of South Africa opens the scoring with a try.)

Ranked No. 5 in the world, South Africa came into the match against No. 12 Italy as favorites, but they were facing a possible exit from the pool stage after opening their World Cup campaign with a 23-13 defeat to New Zealand.

Italy were leading the pool with 10 points following back-to-back bonus-point wins, but their loss put them in a tie with the Springboks with one match remaining in the pool stage.

In the opening half, two of Italy's tight-head props left the pitch injured, and forced the scrums to be uncontested for much of the match. To make matters worse, the second-half red card allowed South Africa to find gaps in their defense and create chances.

Referee Wayne Barnes flashed a red card to Lovotti just after the break, as the Italian lifted Duane Vermeulen and dropped him on the ground when the Azzurri were attacking in South Africa's 22.

The Springboks made them pay when Kolbe completed his brace in the 52nd minute and Lukhanyo Am intercepted an Italian pass and sprinted for the fourth try of the night. Makazole Mapimpi, RG Snyman and Malcolm Marx also bagged five-pointers. 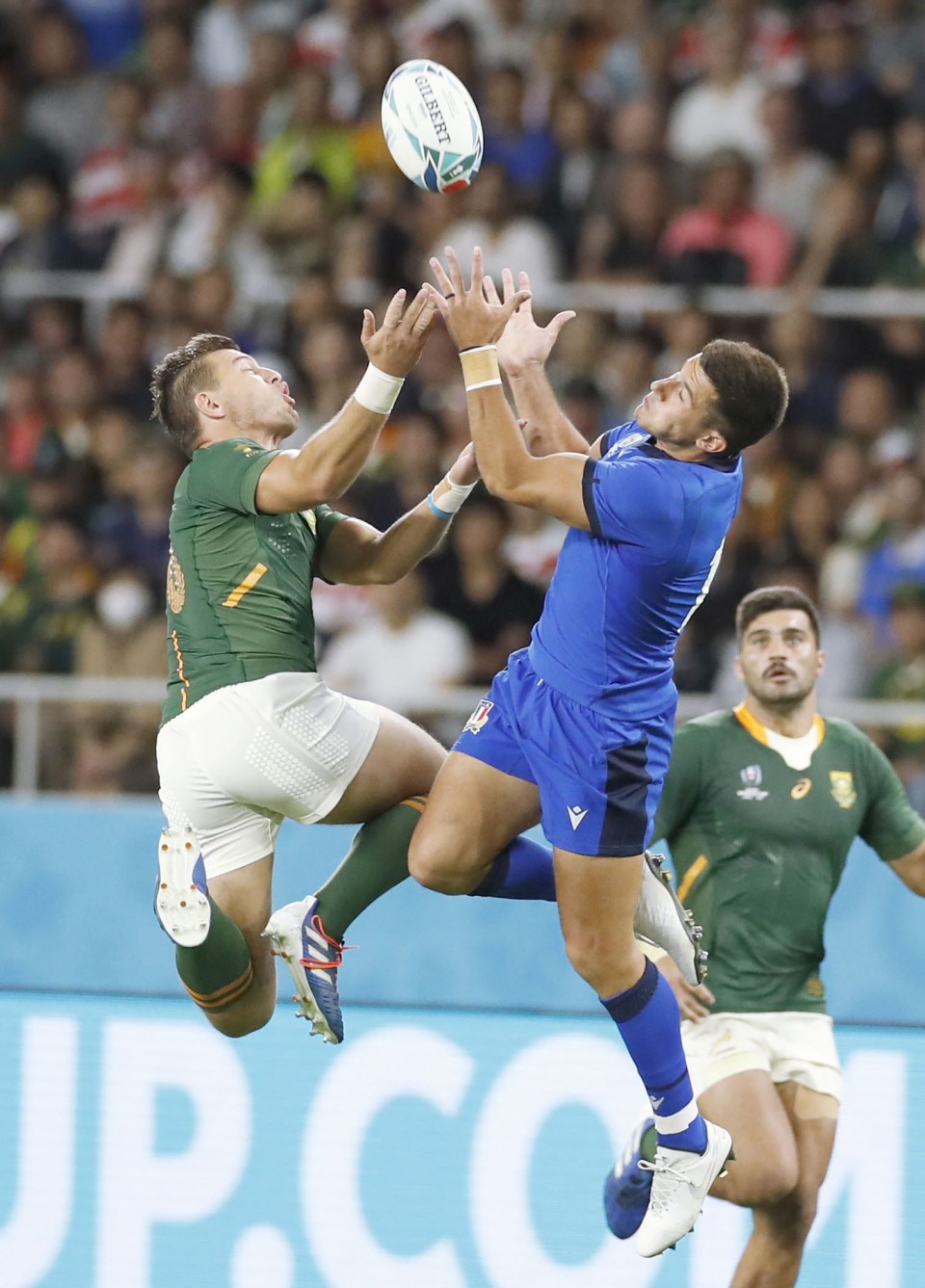 ( Handre Pollard (L) of South Africa and Tommaso Allan of Italy compete for the ball.)

"The first thing is all of us are destroyed," said Italy head coach Conor O'Shea. "South Africa were stronger than us today. At 17-3 we made this line-break and then something inexplicable happened, and after the red card the match was over."

Competing in his fifth World Cup, Italy captain Sergio Parisse earned his 142th cap and landed second on the all-time list, with only New Zealand's Richie McCaw having played more international matches at 148.

"We struggled even before the red card. But we had a chance to come back if it hadn't happened," Parisse said through an interpreter. "The card impacted us mentally...But after all, South Africa were strong." 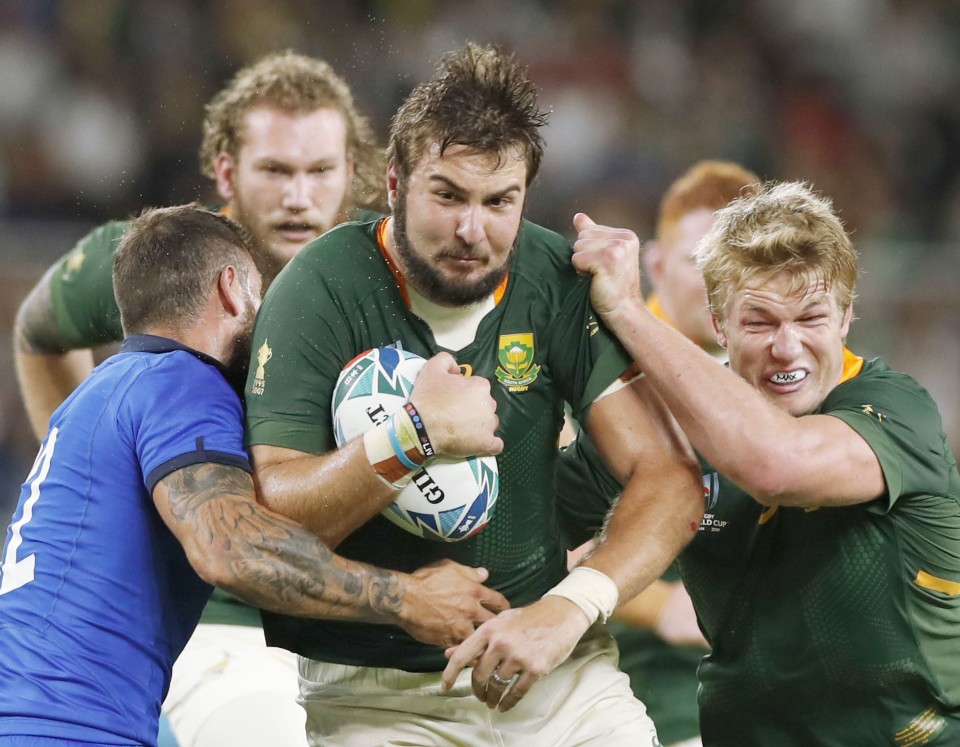 (Lodewyk De Jager of South Africa bursts through the defense.)

Italy came close to scoring in South Africa's 22 in the first stanza, but their disjointed attack and a relentless Springbok defense prevented O'Shea's men from crossing the line.

South Africa will play their final pool match against Canada on Tuesday in Kobe, while Italy will face New Zealand on Oct. 12 at City of Toyota Stadium.