In a policy speech marking the start of an extraordinary parliamentary session, Kishida also said the government will make use of the benefit of the Japanese yen's rapid depreciation while vowing to continue easing the country's coronavirus border controls.

The weaker yen has been driving up import prices, but the premier expressed readiness to tackle rising energy costs, committing to "unprecedented" steps to alleviate the burden on households and companies. 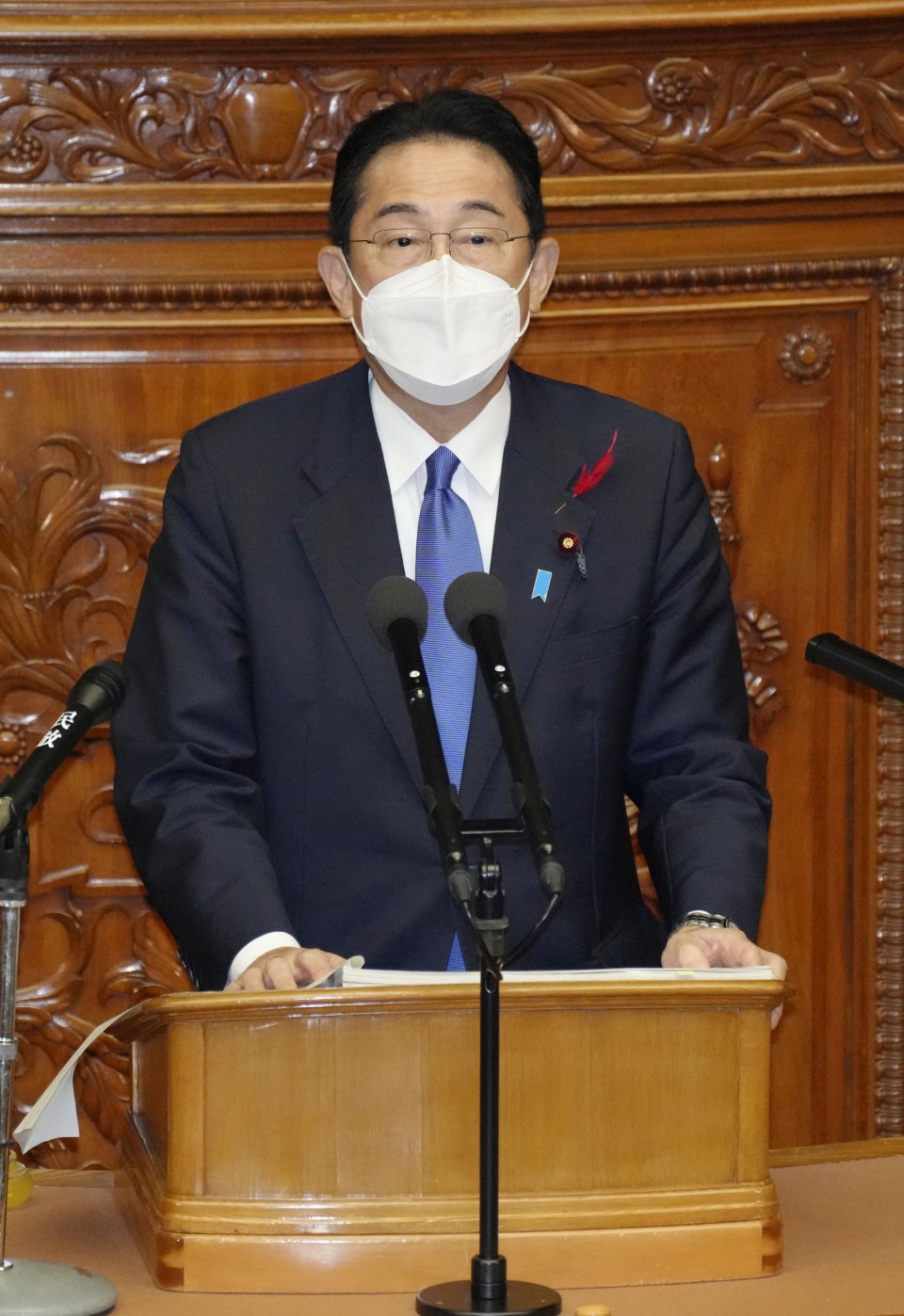 Prime Minister Fumio Kishida delivers a policy speech in the House of Representatives chamber at the parliament in Tokyo on Oct. 3, 2022. (Kyodo)

With the public suffering from higher costs, Kishida said his government plans to encourage wage increases by investing 1 trillion yen over five years in human resource development in promising fields.

"We will make every effort to combat price hikes and will definitely restore the economy" of resource-poor Japan, Kishida said.

The extraordinary parliamentary session convened on Monday as public support ratings for Kishida's Cabinet have plunged due in large part to his unpopular decision to hold a controversial state funeral for former premier Shinzo Abe, who was assassinated in July.

Suspicion about ties between members of the ruling Liberal Democratic Party, led by Kishida, and the Unification Church, a religious group sometimes compared to a cult and established by a staunch anti-communist in South Korea in 1954, has also hurt the popularity of his government.

To temper public frustration and reverse a downtrend in approval ratings for his administration, launched in October 2021, Kishida has been forced to implement policies that could help offset the pain of rising energy and food prices.

During Monday's speech, Kishida said his government has focused on three areas -- responses to higher prices stemming from the yen's slide, wage hikes as well as investment for economic expansion.

Inbound tourism served as a key growth driver for the world's third-biggest economy before the coronavirus' spread in early 2020. Spending by overseas travelers in Japan stood at a record 4.8 trillion yen in 2019, but plummeted to about 120 billion yen in 2021.

Japan, which will remove its cap on daily overseas arrivals on Oct. 11, has hoped one upside of the yen's decline would be the likelihood that foreign tourists are enticed to return.

The yen hit a 24-year low against the U.S. dollar in September. A falling yen boosts the spending power of foreign travelers when they are in Japan.

"We will maximize the advantage of the weak yen" to recuperate the Japanese economy, Kishida said.

The yen's decline also props up exports by making Japanese products cheaper abroad and jacks up the value of overseas revenues in yen terms, but it pushes up import costs, a costly factor when Japan depends on imports for more than 90 percent of its energy needs.

Kishida voiced fears that electricity bills may sharply increase between now and the spring as natural gas prices have been surging across the globe in the wake of Russia's invasion of Ukraine in February.

"We will take unprecedented and drastic measures in a bid to directly mitigate the rising burden on the household and corporate sectors," Kishida said, although he did not elaborate on what the government will do.

With concern mounting that Japan might experience a situation in which there is the confluence of an economic downturn and higher costs, Kishida said his administration will bolster investment to develop human resources in growing industries.

Kishida said the government will map out an economic package in October and submit to parliament the necessary supplementary budget bill for the fiscal year through March 2023 during the current Diet session.

On the defense and diplomatic fronts, Kishida reiterated his administration will try to update the long-term policy guideline, called the National Security Strategy of Japan, by the end of this year -- its first revision since it was adopted in 2013.

Known as one of the more dovish politicians in the conservative LDP, Kishida said the government "will not exclude any options" to protect the people.

"We will firmly protect peace and stability in Asia and the world through multi-layered diplomacy and drastic strengthening of defense capabilities," the premier said.

Regarding criticism of Abe's costly state funeral and the Unification Church, Kishida said he will "sincerely, humbly and respectfully face the most critical opinions of the public."

He added the government is considering reviewing laws and rules on consumer contracts to protect victims of the Unification Church's malicious practices such as "spiritual sales," in which people are persuaded to buy jars and other items for exorbitant prices.

Much of Japan to see heavy snow from Jan. 24 as winter storm arrives

Pet dog, cat involvement suspected in 2 fires in Japan in 2022