Shohei Ohtani reached 200 strikeouts in a season for the first time and extended his MLB career-best win total to 14 as the Los Angeles held off the Minnesota Twins 4-2 on Friday.

Ohtani (14-8) got some much-needed help from the Los Angeles bullpen and Taylor Ward's two home runs to stay unbeaten on the mound in September with his fourth straight win.

The two-way star struck out seven over five-plus innings of two-run ball in which he allowed three hits and six walks. He also drove in a run in a 1-for-4 night at the plate. 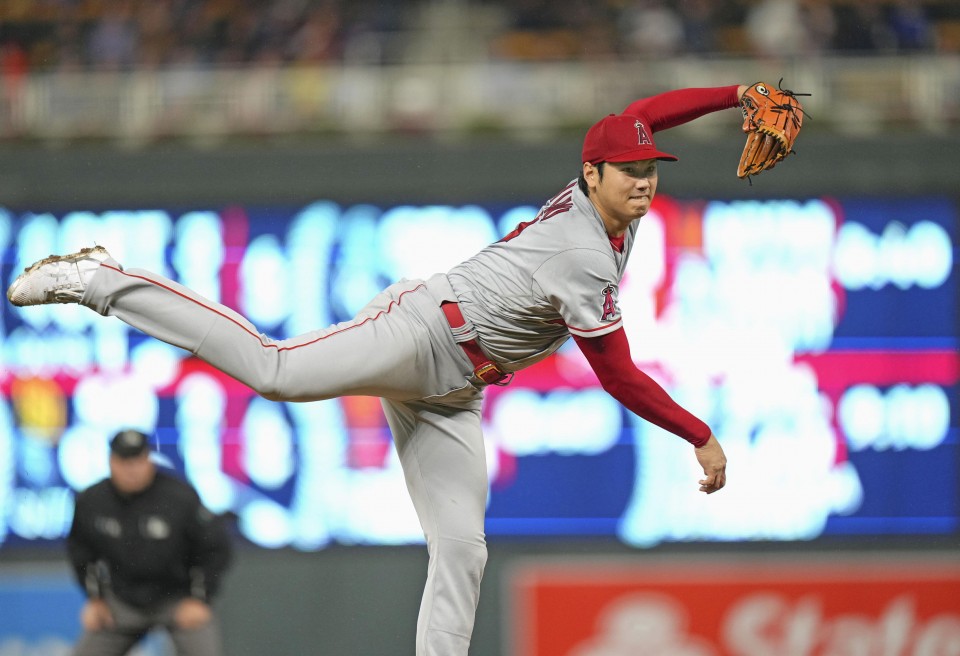 Shohei Ohtani of the Los Angeles Angels throws his 200th strikeout of the season in the fourth inning of a baseball game against the Minnesota Twins on Sept. 23, 2022, in Minneapolis, Minnesota. (Kyodo)

He became the fourth Japanese pitcher to throw 200 or more strikeouts in an MLB season when he got Gary Sanchez out looking in the bottom of the fourth on a drizzly night at Target Field.

In yet another milestone, Ohtani, who has hit 34 home runs this year, became the first player in American or National League history with 30 homers at the plate and 200 strikeouts on the mound in a season, according to MLB.com.

"Walking many batters was the worst part of my outing," Ohtani said. "I had a hard time adjusting my foot placement on the mound (in the rain). I think this is a good experience."

Ward put the Angels up 3-1 in the top of the sixth when he smacked his second solo home run of the night off Minnesota starter Louie Varland (0-2).

Reigning American League MVP Ohtani got into trouble with none out in the bottom of the inning, conceding a run and loading the bases on two hits and two walks before getting pulled with the lead cut to 3-2.

Left-handed reliever Aaron Loup finished the frame and earned his 18th hold as he combined with Jimmy Herget and closer Ryan Tepera in ensuring the Angels completed the game without giving up a further run.

Ohtani gave the Halos extra breathing room when he grounded an RBI single to center in the seventh.

The 28-year-old had never previously tallied 200 strikeouts in the majors or Japanese baseball. Countrymen Hideo Nomo and Yu Darvish have each logged four 200-strikeout seasons in MLB, while Daisuke Matsuzaka did it once.

Ohtani, Osaka among sued in U.S. over collapsed-crypto exchange FTX

Football: Tomiyasu ready to step up for short-handed Japan vs Croatia