The International Olympic Committee on Monday recommended that sports federations ban athletes from Russia and Belarus from international competitions in response to the war in Ukraine.

The IOC's executive board made the recommendation in a lengthy statement three days after issuing an advisory to cancel the hosting of international sports events in the two countries, which was met with calls for stronger measures. 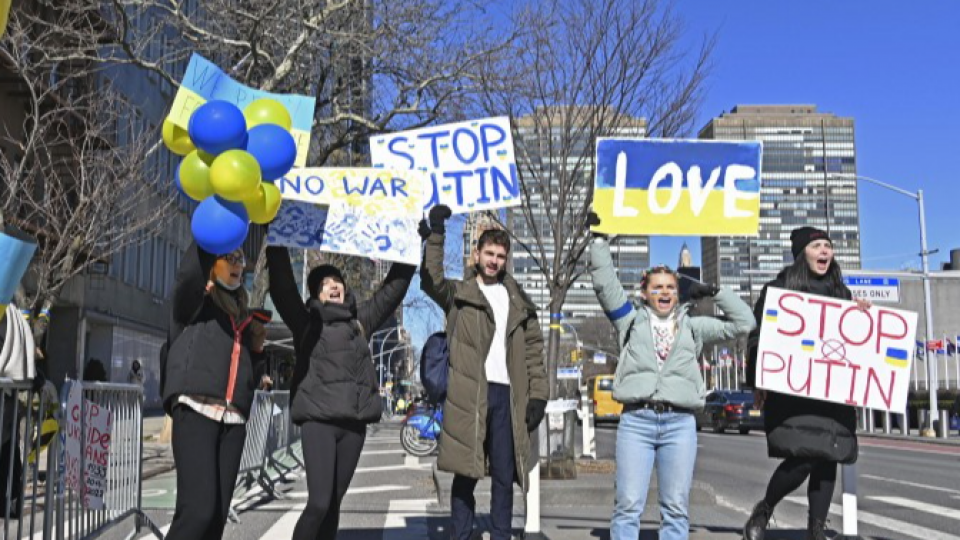 Ukrainian residents protest Russia's invasion and war in Ukraine in front of the United Nations headquarters in New York on Feb. 28, 2022. (Kyodo) ==Kyodo

"In order to protect the integrity of global sports competitions and for the safety of all the participants, the IOC EB recommends that (event organizers) not invite or allow the participation of Russian and Belarusian athletes and officials," the board said.

The IOC has also decided to withdraw its gold Olympic Order honors awarded to Russian President Vladimir Putin, Deputy Prime Minister Dmitry Chernyshenko and Dmitry Kozak, deputy chief of staff of the country's Presidential Executive Office, based on the "exceptional circumstances of the situation."

If Russian and Belarusian athletes cannot be barred from certain events for legal reasons, the IOC recommends preventing them from competing under the flags of their countries.

The International Paralympic Committee will meet Wednesday to discuss how to handle the issue at the March 4-13 Beijing Winter Paralympics.

The national Olympic committees of Britain, Germany and Canada have also issued calls for the exclusion of Russia and Belarus from international sports.

Russian Olympic Committee President Stanislav Pozdnyakov strongly objected to the IOC recommendation in a statement, saying it violated the IOC and Olympic charters.