Having beaten France's Amandine Buchard for gold, 21-year-old Uta cheered for 23-year-old Hifumi from the edge of the mats, leaping jubilantly as he prevailed over Georgia's Vazha Margvelashvili in the final. 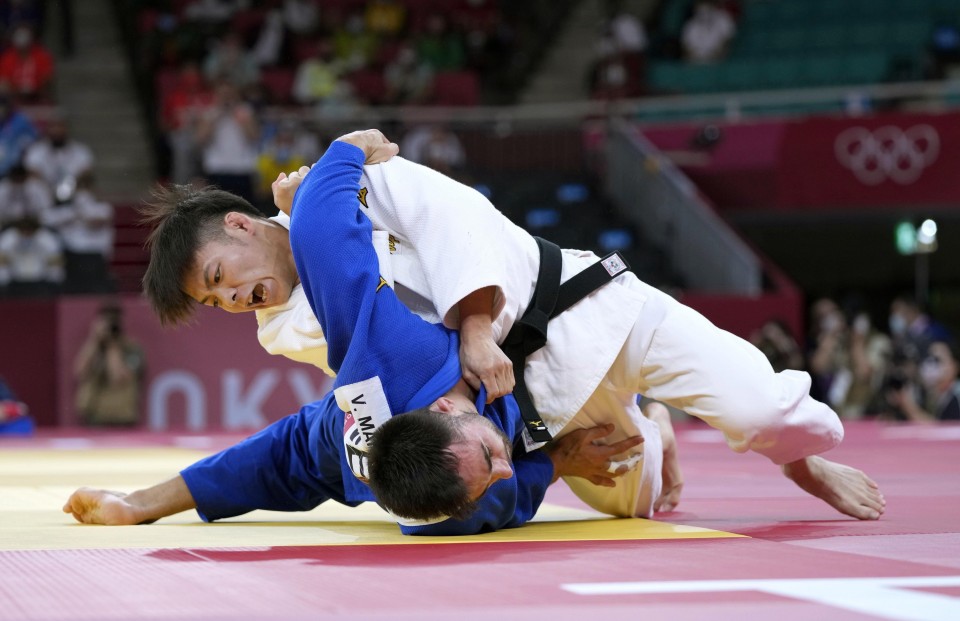 Hifumi Abe (white) of Japan and Vazha Margvelashvili of Georgia compete in the men's judo 66-kilogram final at the Tokyo Olympics at Nippon Budokan in Tokyo on July 25, 2021. (Kyodo)

Their victories at Tokyo's historic Nippon Budokan took Japan's gold medal tally to five, including three from judo, and made them the first Japanese brother and sister to capture gold on the same day of Olympic competition.

"I think we put our names in history, and we were able to change history," Hifumi said.

The elder Abe defeated Margvelashvili in the final after deploying an outer leg sweep late in the second minute of regulation to earn a waza-ari point.

The newly crowned champion appeared stoic immediately after his win, but said he became overcome with emotion upon stepping off the mats.

"The Olympic Games were held in such a situation (of the coronavirus pandemic), and thanks to a lot of people...I thought I should pump my fist or smile at first, but thinking about everything, many things welled up inside me," he said.

Competing in her first Olympics, Uta fought her toughest battle of the tournament in the final against reigning European champion Buchard. 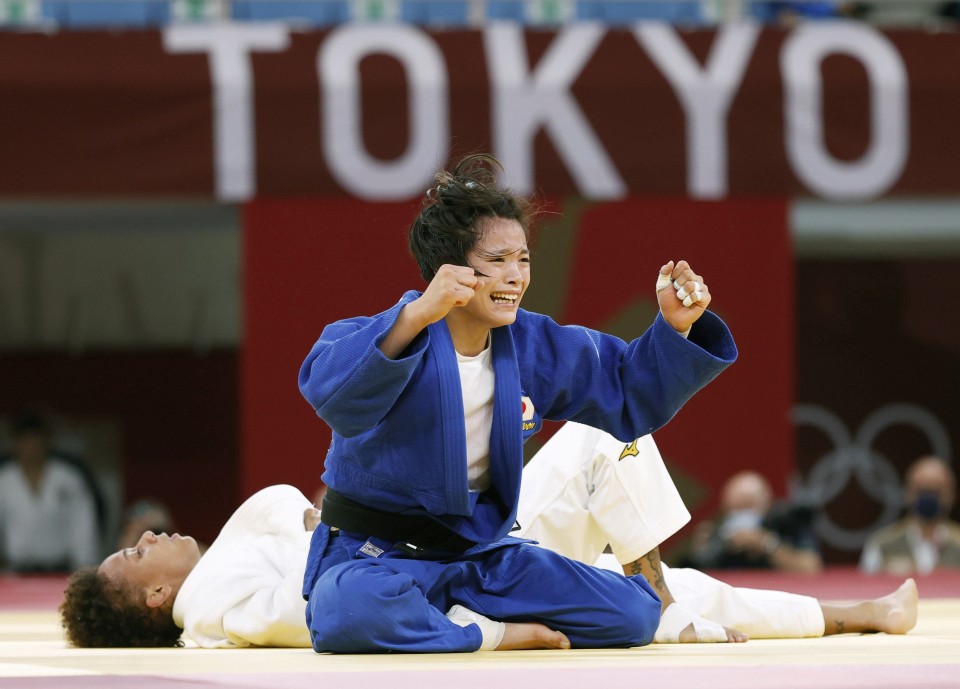 Uta Abe (blue) of Japan reacts after winning the women's judo 52-kilogram final against Amandine Buchard of France at the Tokyo Olympics at Nippon Budokan in Tokyo on July 25, 2021. (Kyodo)(TOPPAGE) ==Kyodo

With the pair deadlocked through regulation, Abe pinned Buchard for a golden-score ippon victory after 4 minutes, 27 seconds of extra time. Uta struck the mat with both hands and exploded with joy.

"In the past four years, I was really working hard for these games, so I am very glad that my efforts paid off," Uta said. "When my brother won the gold medal, I was relieved, and was very happy as well. We congratulated each other before the victory ceremony."

The only non-Japanese judoka to beat her in recent competition, Buchard had prevented Abe from sewing up Olympic selection by winning their bout at the 2019 Osaka Grand Slam.

"(Buchard) is a rival and someone I really respect...I am very happy I beat her at the end," Uta said.

A two-time world champion, the younger Abe had powered her way to the gold medal match, starting with an ippon win over Brazilian Larissa Pimenta in the opening round.

In her quarterfinal against Briton Chelsie Giles, she scored the decisive point with a waza-ari in the last 30 seconds of regulation.

Her semifinal against Rio de Janeiro Olympic silver medalist, Italy's Odette Giuffrida, lasted just over three minutes into golden-score extra time before the Japanese threw her opponent to the mat for victory by waza-ari.

Hifumi booked his final berth with an ippon against Brazilian Daniel Cargnin, toppling him with a seoi-nage shoulder throw after 2:25 of the semifinal.

He opened his campaign with a golden-score ippon win against France's Kilian Le Blouch before outpointing Mongolian Baskhuu Yondonperenlei in the quarterfinals. 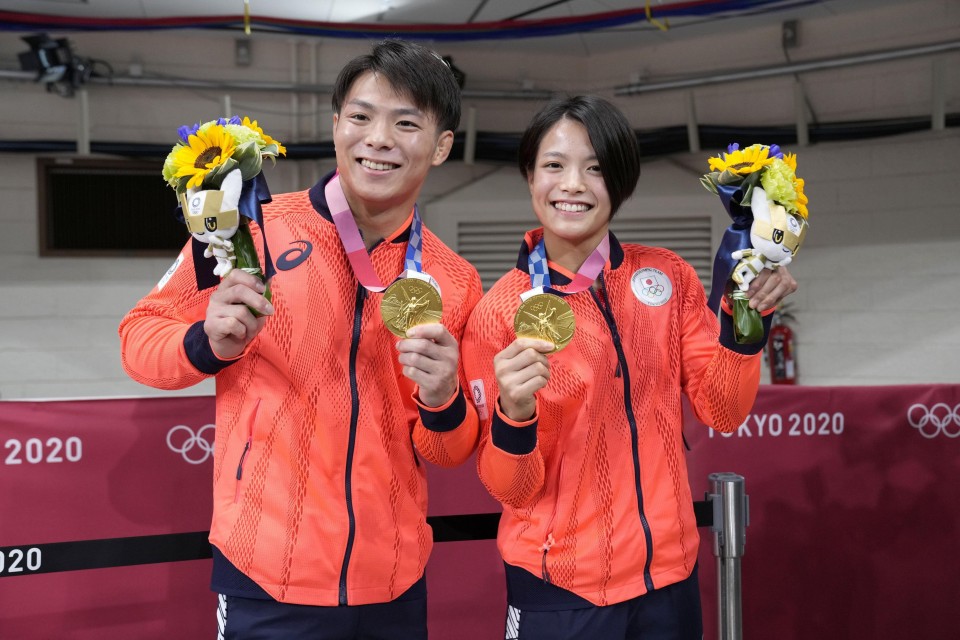 Japanese judoka Hifumi Abe (L) and his younger sister and judoka Uta Abe pose for a photo after winning the men's 66-kilogram and the women's 52-kilogram at the Tokyo Olympics on July 25, 2021, at Nippon Budokan in Tokyo. (Kyodo)(TOPPAGE) ==Kyodo 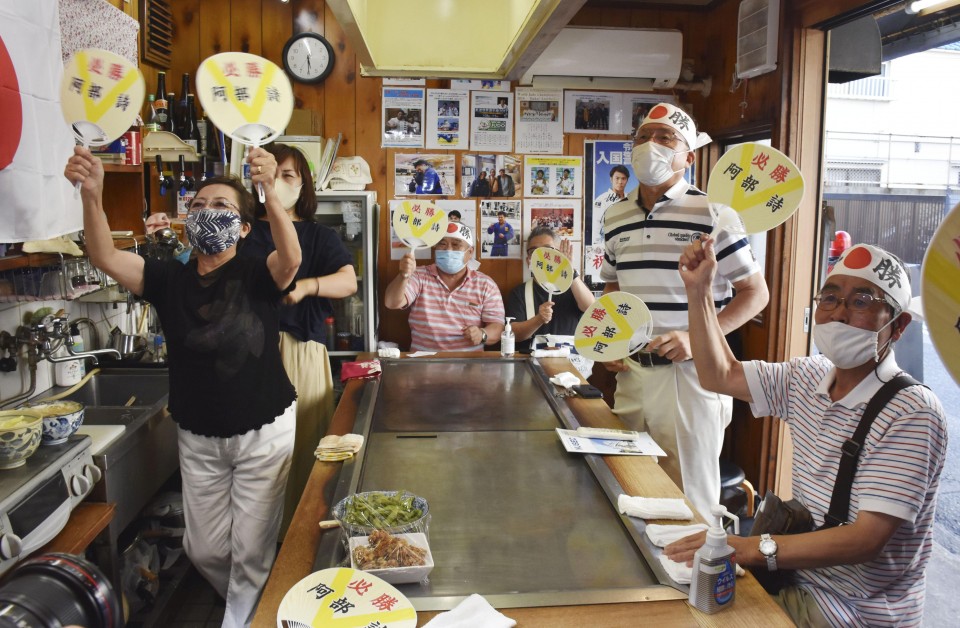 Supporters of Japanese judoka Hifumi Abe and his sister Uta watch TV at a "okonomi-yaki" restaurant in Kobe, western Japan, as the siblings compete at the Tokyo Olympics on July 25, 2021. Both of them won gold the same day. (Kyodo) ==Kyodo