Japan plans to lower the spectator cap at the Tokyo Olympics to 5,000 per venue and may hold a fresh lottery for ticket holders if the ongoing COVID-19 quasi-state of emergency in the capital is extended due to a recent rebound in infections, officials familiar with the matter said Tuesday.

Organizers are also expected to stage all sessions after 9 p.m. without general spectators, including the opening and closing ceremonies at the National Stadium, according to the officials.

Amid emerging signs of a new wave of infections in Tokyo, driven by highly contagious variants of the coronavirus, the Japanese government and other organizers have found it more difficult to stage the Olympics under the current spectator policy, which allows venues to be filled to 50 percent of capacity with a maximum of 10,000 people. 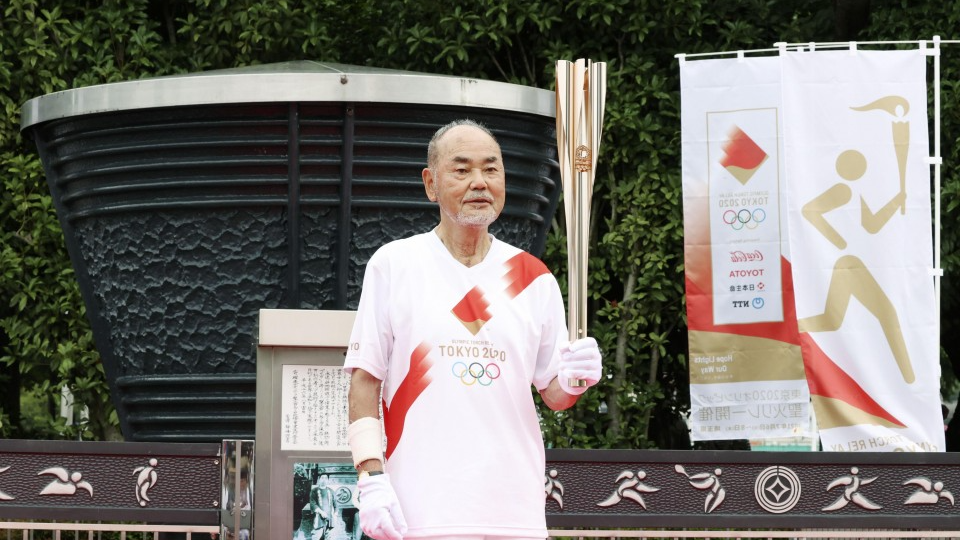 A torch relay participant for the Tokyo Olympics starting in late July 2021 poses for a photo in front of a replica of the cauldron used during the 1964 Tokyo Olympics on July 6, 2021, in the Saitama Prefecture city of Kawaguchi. (Kyodo) ==Kyodo

The current ceiling was set in line with the government's policy on spectator limits for major events in the country and on the assumption that Tokyo will no longer be under a quasi-state of emergency beyond its last day on Sunday.

The organizing committee said Monday it will push back the release of the results of a ticket lottery following the present spectator cap to Saturday.

The government is expected to decide later this week on extending the emergency covering the Tokyo metropolitan area, possibly to the period of the Olympics, set to begin on July 23.

The organizers of the Olympics and Paralympics could hold a meeting as early as Thursday to agree on a new spectator cap. On that day, International Olympic Committee chief Thomas Bach is scheduled to arrive in Japan.

Still, uncertainty is growing over whether the Olympics, delayed for one year due to the coronavirus pandemic, can actually be held safely, with the Tokyo metropolitan government saying it will take the torch relay off public roads also in the second half of the 15-day leg passing through central districts of the capital.

The announcement means that the Tokyo relay leg, set to begin Friday, will be held without roadside spectators in almost all areas except small islands.

About 1,300 people will not be able to run on public roads. Instead, the games organizing committee and the metropolitan government will organize torch-lighting ceremonies for the runners to connect the flame in such places as parks behind closed doors.

On Tuesday, Tokyo reported 593 new cases of the virus, exceeding the number logged a week earlier for the 17th straight day.

The metropolitan government last week said the relay will be pulled off the roads, excluding Tokyo's small islands, for the first eight days. It will hold an event on Friday morning to celebrate the arrival of the flame.

"I've been training to prepare for my turn, but I guess it can't be helped," said Hideo Sato, a 79-year-old who was scheduled to participate in the relay on July 18. "It is no fun to have just a ceremony, but I think I will still participate."

In a related development, the organizing committee said it has decided to ask the general public not to gather along the roadside to watch Olympic marathons and race walk events in Sapporo between Aug. 5 and Aug. 8, the final day of the games.

The committee said it agreed at a meeting attended by officials of Sapporo and Hokkaido that it will be necessary to restrict the movement of people to minimize the risk of infections.

The nationwide torch relay started in the northeastern prefecture of Fukushima in late March. It was initially scheduled to involve 10,000 runners carrying the flame on public roads in all of Japan's 47 prefectures in an effort to build enthusiasm for the games.

But segments of the relay in many areas have been downsized or held behind closed doors due to the pandemic.