Tokyo Olympics' 10,000-spectator cap to be reviewed due to COVID rise

The Japanese government and other organizers of the Tokyo Olympics plan to hold a meeting possibly next week to review the policy of capping the number of spectators at 10,000 per venue, officials close to the matter said Friday, as the capital continues to grapple with a resurgence of coronavirus infections.

With just three weeks remaining until the opening of the games, representatives of the organizers could meet as early as Thursday -- the day International Olympic Committee President Thomas Bach is due to arrive in Japan -- to discuss how best to deal with local fans, if the current quasi-state of emergency in Tokyo and other areas is extended, according to the officials.

Tokyo Gov. Yuriko Koike said Friday that holding the Olympics without spectators should be considered as one of the main options, as the capital continues to grapple with potentially another wave of coronavirus infections. 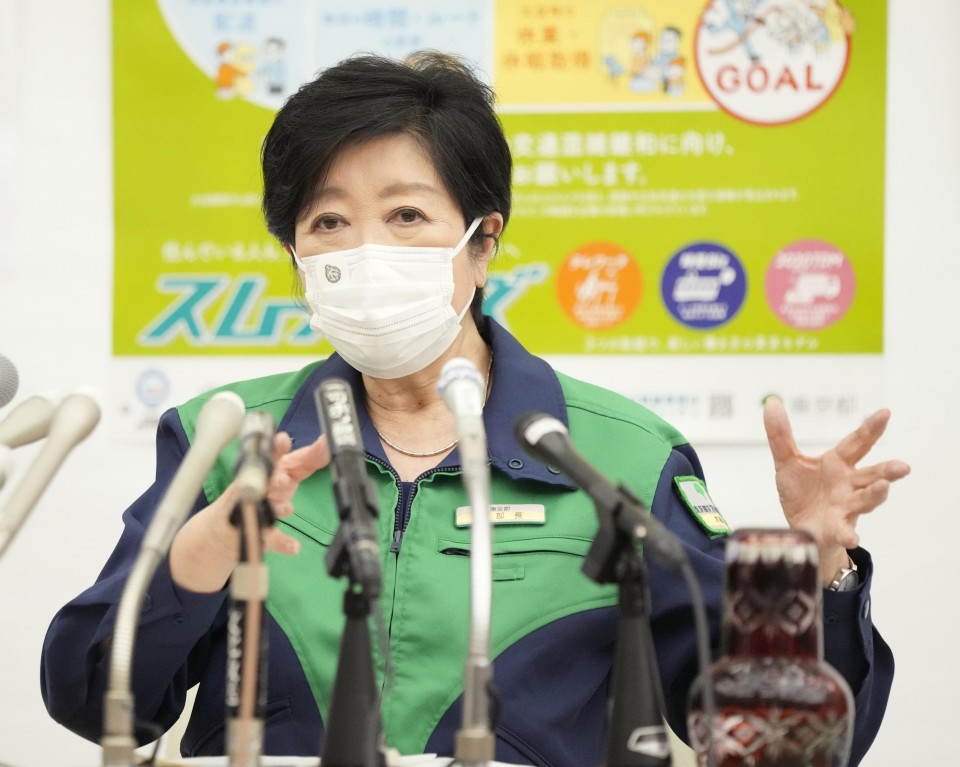 Tokyo Gov. Yuriko Koike attends a press conference at the metropolitan government headquarters on July 2, 2021, for the first time after treatment at a hospital for severe fatigue. (Kyodo) ==Kyodo

Appearing at a press conference for the first time since being discharged from the hospital on Wednesday following a one-week treatment for what was described as "severe fatigue," Koike reiterated that the games' organizers will need to review the current policy on spectators if the coronavirus situation worsens in Tokyo.

"There is no more important time for Tokyo than now," Koike said, as the capital logged 660 new infections, an increase of roughly 100 cases from a week ago, when medical experts, including the country's top COVID adviser, have called for the games to be held behind closed doors to prevent the virus from spreading.

Seiko Hashimoto, president of the Tokyo Olympic and Paralympic organizing committee, said at a separate press conference that the organizers are "prepared" to go ahead without fans in the stands if the government sets such a policy after analyzing the infection situation.

"I don't know what will happen to the infection situation that changes from day to day, but the organizing committee will be prepared (to hold the games) without spectators and be able to correspond to any policy that may be shown," Hashimoto said.

The five organizing bodies of the Olympics and Paralympics decided late last month that venues can be filled to 50 percent of capacity with a maximum of 10,000 spectators, agreeing that the policy will be reviewed if the coronavirus pandemic situation worsens.

The organizers have already barred the participation of overseas spectators.

A blanket closed-door no-spectator option is one possibility on the table, while another option is setting the cap at 5,000.

Some officials have floated the idea of banning spectators from certain nighttime events and some at large venues with over 5,000 tickets sold.

The 10,000-spectator attendance cap was set on the premise that the ongoing quasi-state of emergency is lifted.

Daily infections in Tokyo have been climbing since a state of emergency was lifted last month, and the government appeared to have no choice but to extend a quasi-state of emergency covering the capital that is set to expire on July 11.

Under the somewhat lighter measures than a state of emergency, the number of people allowed at sports and other big events is restricted to 50 percent of venue capacity with an upper limit of 5,000 people.

A fresh lottery has been held to reduce the number of tickets by 910,000 to 2.72 million, accounting for about 35 percent of the total seats in venues.

The results of the lottery are scheduled to be released next Tuesday. But the committee could delay the announcement as a recent rebound in COVID-19 cases may require it to further slash the number of ticket holders.

The organizing committee said Friday the opening ceremony on July 23 has been extended by 30 minutes as part of measures to enhance the safety of athletes.

The committee said it has changed the schedule to have the ceremony end at 11:30 p.m. because the extra time will be needed for athletes to march in the stadium, with enough physical distancing between them.

Upon request from the committee, the Defense Ministry said it will mobilize about 8,500 members of the Self-Defense Forces for maintaining security around venues of the Olympics and Paralympics and assisting flag-raising ceremonies.