The victory brought Japan's gold medal tally for the Tokyo Games to 16, matching its previous Olympic record, set when it first hosted the games in Tokyo in 1964 and equaled at the 2004 Athens Games. A gold-medal victory by the men's fencing epee team later in the evening gave Japan its biggest haul ever. 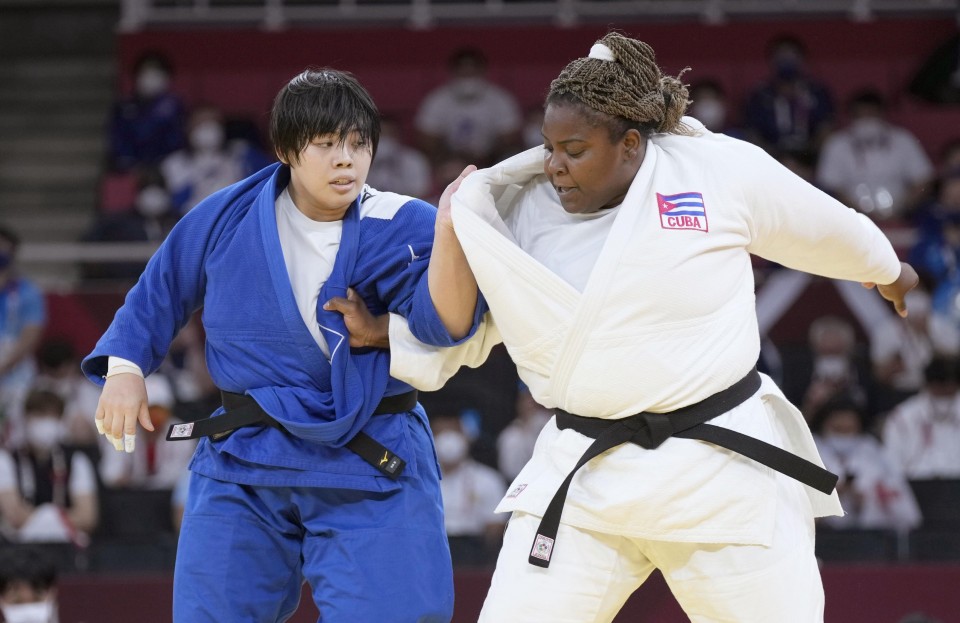 Japan's Akira Sone (blue) competes against Cuban Idalys Ortiz in the women's over 78-kilogram final at the Tokyo Olympics on July 30, 2021, at Nippon Budokan in Tokyo. (Kyodo)

The 21-year-old Sone lived up to her billing as the gold medal favorite in the heaviest women's weight class at Nippon Budokan, winning each bout from the round of 16 through the semifinals by ippon.

The Olympic debutant faced a prolonged battle against Ortiz, in a rematch of the 2019 world championship final, but came out on top once again when the Cuban picked up her third penalty to end the bout after 4 minutes, 52 seconds of golden score.

Sone said she was "filled with gratitude" that the Olympics could be held despite the coronavirus pandemic, having dedicated herself to perfecting her aggressive, attacking style of judo.

"I wanted to go on the offensive first. I thought, there's no way I can lose," she said. "I'm really glad I put in all that hard work."

In her semifinal against Azerbaijan's Iryna Kindzerska, she earned ippon via back-to-back waza-ari techniques, throwing her opponent and then putting her in a hold on the floor.

She won her quarterfinal in similar fashion, toppling and quickly wrapping up Turkey's Kayra Sayit for ippon in the final minute of regulation.

The 29-year-old Harasawa succumbed in his semifinal against Krpalek after nearly four minutes of golden score, with the Czech toppling him for a waza-ari point.

He lost his bronze medal bout against French great Teddy Riner, in a rematch of the Rio Olympic heavyweight final, after incurring his third penalty just over a minute into golden score.

"Maybe I could have done more. Right now I have a lot of regrets," Harasawa said. "I was only able to compete here because of all the people who cheered me on, who encouraged me. I regret not being able to give back to them by getting results."

The Rio silver medalist had looked impressive in his quarterfinal victory over Ukraine's Yakiv Khammo, earning ippon with an uchi-mata inner thigh throw.

Back-to-back champion Riner's bid for a third straight gold medal had ended in a quarterfinal loss to Russian Tamerlan Bashaev.

The first Japanese woman to claim the over-78-kg crown since Maki Tsukada at the 2004 Athens Games, Sone brought Japan's judo gold medal haul to nine. Four of those have been earned by women, second only to the five won in Athens.