The 29-year-old Ono had looked unbeatable on the way to the gold-medal match at Nippon Budokan, but had to dig deep against Shavdatuashvili to defend the title he won five years ago in Rio de Janeiro. 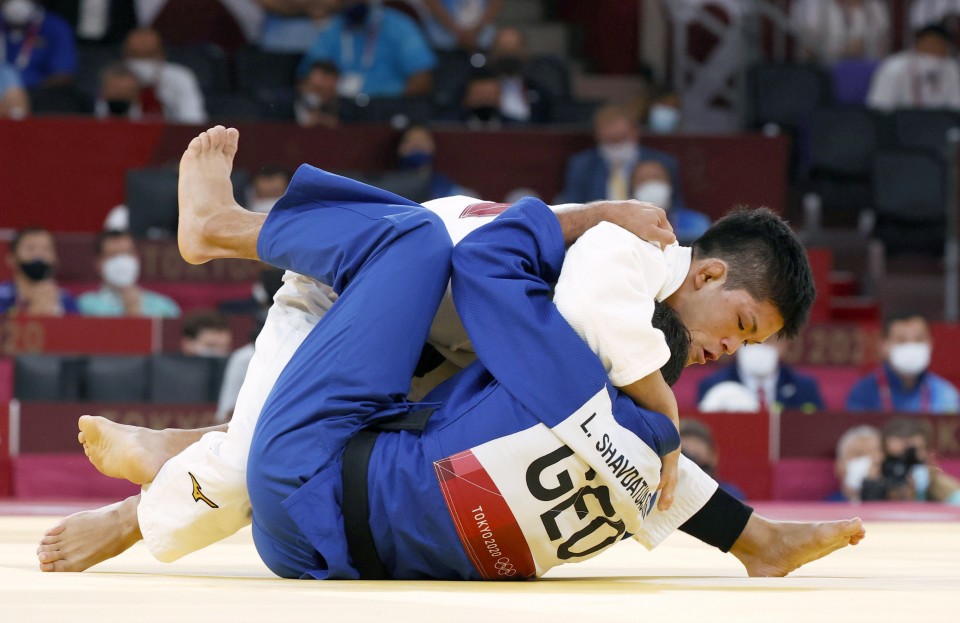 Shohei Ono (white) of Japan and Lasha Shavdatuashvili of Georgia compete in the men's judo 73-kilogram final at the Tokyo Olympics at Nippon Budokan in Tokyo on July 26, 2021. (Kyodo) ==Kyodo

With the match having entered sudden death, Ono was in danger of disqualification after picking up his second shido penalty. A third would have handed the bout to Shavdatuashvili, winner of 66-kg gold at the 2012 London Games.

After the Georgian had evaded Ono's attempt at an uchi-mata inner thigh throw, the defending champion swept Shavdatuashvili off his feet with a decisive waza-ari ankle kick in the sixth minute of extra time.

Ono is the first judoka to win multiple Olympic golds at 73-kg and the fourth Japanese male judoka to defend an Olympic title. Japan has won six Olympic gold medals in the weight class, the most by any nation in a single judo event.

By winning Japan's fourth judo gold medal of the Tokyo Games, he continued the host nation's run of at least one gold on each day of competition.

His showdown with Shavdatuashvili lasted an arduous 9 minutes, 25 seconds and was his second golden-score bout, after his semifinal against Tsogtbaatar Tsend-Ochir of Mongolia, who won a bronze.

"Today felt like all of the tough and grueling days after the Rio de Janeiro Olympics, condensed into one day," Ono said, who took off a year to recuperate after the Rio Games.

"All I had were pessimistic thoughts, and I was so anxious from last year. And I don't feel that it all paid off today. My judo career is not over, and I will continue training to win over myself."

Acknowledging the Japanese public's mixed feelings toward the games amid the coronavirus pandemic, Ono said he hoped to generate some goodwill with his performance.

"I know public opinion (over the Olympics being held now) is divided, but I would be truly honored if watching us athletes moves you, if only for a moment," said Ono, who will also fight for Japan in the mixed teams event.

"Moving through the semifinals, the finals and extra time, I felt more scared than I ever have, so the fact that I was able to still win, maybe it was something beyond just my ability," Ono said.

Fighting in her first Olympics, Yoshida earned an ippon victory over Liparteliani after throwing the former junior world champion to the mat twice with uchi-mata.

"I was absolutely determined to win the bronze medal," said a tearful Yoshida, whose title bid ended in a semifinal loss to eventual gold medalist Nora Gjakova of Kosovo.

"I had been aiming for the gold medal, I'm so gutted."

In the semifinal, the 2018 world champion had made two unsuccessful attempts to topple Gjakova by uchi-mata before the bout entered golden score. Gjakova won the decisive point with a waza-ari throw just after the two-minute mark of extra time.

Gjakova won gold after her final opponent, France's Sarah Leonie Cysique, was disqualified for going head-first into the mat to evade a throw.

The 25-year-old Yoshida took just over a minute to beat China's Lu Tongjuan by ippon in her opening bout, then outpointed Israel's Timna Nelson Levy in the quarterfinals.

In his semifinal bout with Tsend-Ochir, Ono hooked the Mongolian's leg for waza-ari in the first minute of golden score.

He overwhelmed Turkey's Bilal Ciloglu in the round of 16, pinning the 2021 world championship bronze medalist for ippon. Ono dominated Azerbaijan's Rustam Orujov in the quarterfinals, earning ippon with back to back waza-ari throws.

Canada's Jessica Klimkait took the other women's 57-kg bronze with victory over Kaja Kajzer of Slovenia.