Tokyo Olympic organizers said late Friday they have reversed their earlier decision to allow up to 10,000 spectators at daytime events on Japan's northernmost main island of Hokkaido, a day after deciding to stage the games behind closed doors at almost all venues due to a surge in COVID-19 cases in the Tokyo area.

The games organizing committee said Sapporo Dome, one of the venues for men's and women's soccer, was to allow up to 10,000 people or 50 percent of its capacity, whichever is fewer, in sessions or time slots that begin during the day. 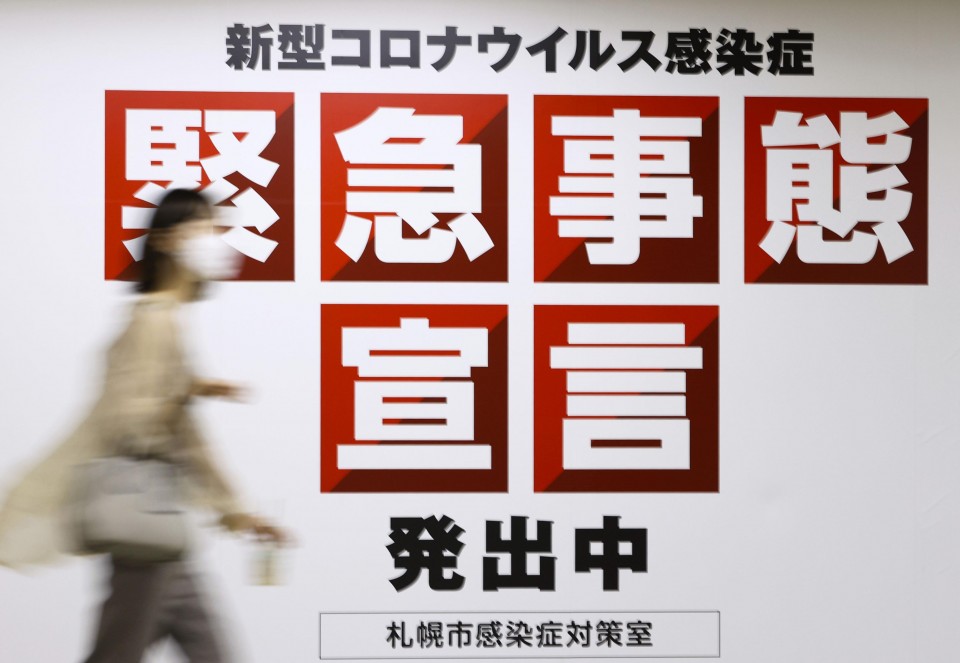 A woman wearing a face mask walks by a signboard set up on an underground street reading "a coronavirus state of emergency remaining in place" in Sapporo on the northernmost Japanese main island of Hokkaido on June 17, 2021. (Kyodo)

Hokkaido Gov. Naomichi Suzuki, who had requested that the soccer matches be held without spectators, told reporters the organizers reversed their earlier decision to allow spectators at the soccer venue after talks with Hokkaido officials.

According to the organizers, the reason for the about-face is the difficulty of preventing the flow of people between Hokkaido and Tokyo, which will be placed under a fresh COVID state of emergency through Aug. 22.

With most of the events set to be held without spectators during the Summer Games, the organizers are expected to review their plans regarding volunteers and medical staff.

On Thursday, the committee and other organizing bodies agreed to hold the Olympics without spectators in Tokyo and the neighboring prefectures of Saitama, Chiba and Kanagawa, after the Japanese government decided to again place the capital under a COVID-19 state of emergency.

The prefectures of Miyagi, Fukushima and Shizuoka will allow general spectators.

While Hokkaido will also stage the men's and women's marathon and race walk events between Aug. 5 and 8, the organizers have already requested that the public refrain from gathering along the routes.