TOKYO - Tokyo Olympic organizers said Monday venues can fill to 50 percent of capacity, up to a maximum of 10,000 spectators, despite calls from the public and medical experts to either stage the games behind closed doors or cancel them amid concern about the spread of the coronavirus.

The decision was made a day after a state of emergency ended in Tokyo, but infectious disease experts continue to warn of a possible spike in COVID-19 cases if the Olympics take place about a month from now. 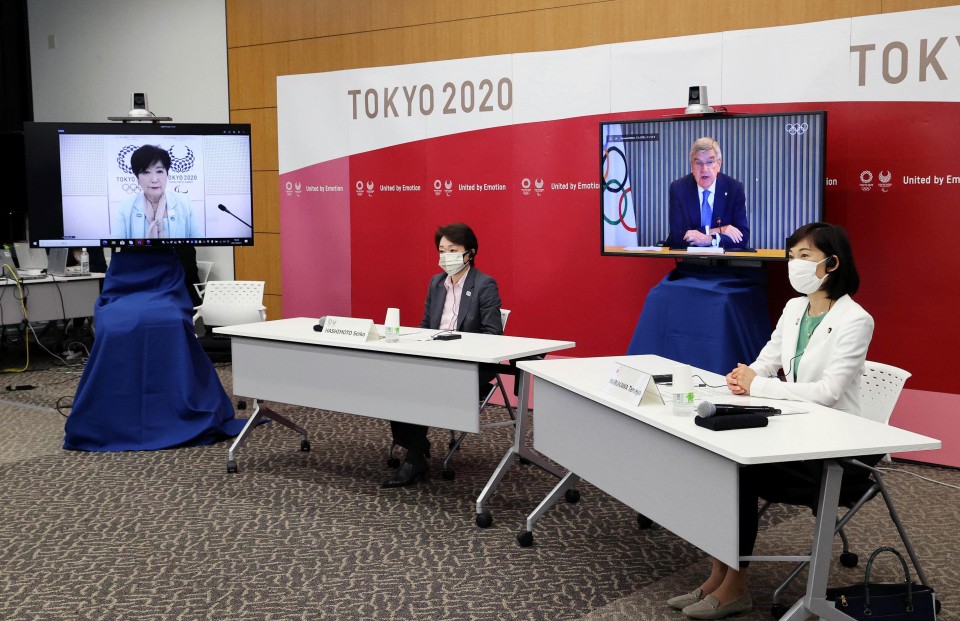 While it is in line with the Japanese government's policy for large events, the organizers said they will consider the possibility of holding the Olympics without spectators if the infection situation worsens before or after the global sporting event begins on July 23.

"As the spectator cap has been decided, we have collected the last piece (of the puzzle). I think the framework of the stage has been completed," Seiko Hashimoto, president of the games organizing committee, said in a press conference after the meeting.

She said the committee will not sell any more tickets and will hold a fresh lottery to determine who will be able to watch in person for events with over 50 percent of the venue capacity already filled.

Toshiro Muto, CEO of the committee, said the number of tickets will likely be reduced to about 2.72 million from 4.48 million sold before the pandemic, and the revenue from them will be less than half of the initially projected 90 billion yen ($820 million), he said.

The organizing committee has drafted guidelines for spectators, requesting them to always wear masks and travel to and from venues directly without making extra stops to limit the movement of people and thus reduce the risk of spreading the virus.

They are also prohibited from speaking loudly or shouting, while the organizers will consider whether to sell alcoholic beverages at venues.

In his opening remarks at the meeting, Bach said he is "absolutely sure" that the attendance cap will "best protect the Japanese people and all participants."

"The IOC will fully support your decision and will fully contribute to making these games as safe and secure for the Japanese people and for all participants," Bach said, adding that "well over 80 percent" of athletes' village residents will be vaccinated.

Since the Olympics and Paralympics were postponed for one year in March 2020, they have been reworking preparations in hopes of holding the games safely amid a global health crisis.

Still, the Japanese public remains unconvinced that it is possible to stage the Olympics and Paralympics without complications, despite repeated reassurances from the government and organizers.

Tokyo shifted to a quasi-state of emergency from Monday when it reported 236 new cases of infection.

Shigeru Omi, Japan's top COVID-19 adviser, and 25 other infectious disease experts on Friday warned that allowing people into venues for the Olympics could lead to another surge.

A nationwide survey conducted by Kyodo News over the weekend found that around 86 percent of people in Japan are concerned about a resurgence in COVID-19 cases if the games are held.

The Japanese organizers had initially sought to set the policy by the end of spring, but the schedule was delayed as Tokyo has been under COVID-19 states of emergency for most of this year due to multiple waves of infections driven by highly contagious coronavirus variants.

The organizers have said they will apply the Japanese government's policy on spectator caps at large sporting events and concerts to the Olympics, implying they would allow 50 percent of venue capacity or up to 10,000 fans, whichever is smaller.

Muto said Olympic officials will not be counted as spectators so that the opening ceremony at the 68,000-seat National Stadium may have more than 10,000 people in the stands, but the number will be less than 20,000.

The organizers said the current competition schedule for the Olympics remains unchanged, and they will decide by July 16 on spectator limits for the Paralympics, due to begin Aug. 24.

Kozue Saito, who has purchased tickets to watch athletics at the National Stadium with her husband and two sons, said she is "happy" that she may have a chance to watch the world's top athletes compete.

"I didn't receive any information on whether I could watch the event for a while," she said. "I want to know how and when the lottery will take place as soon as possible."

Olympic competitions will be held in about 40 venues located in Tokyo and other prefectures. Other large capacity venues include International Stadium Yokohama, which seats roughly 72,000, and Tokyo Stadium, which can hold up to 48,000 spectators.