A Japanese lawyer who launched a popular online petition calling for the cancellation of this summer's Olympics on Friday urged the Tokyo metropolitan government to call off the games, saying protecting people's lives from the coronavirus must be the top priority.

Kenji Utsunomiya, who on May 5 launched the online campaign that has gathered over 350,000 signatures, said Japan and the rest of the world are not ready to stage the Olympics and Paralympics due to the global health crisis. 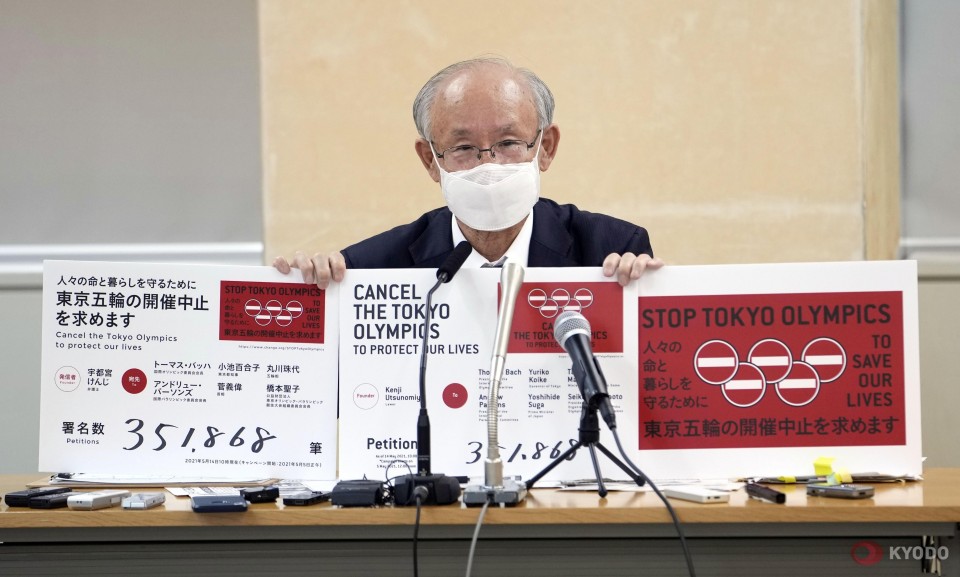 Kenji Utsunomiya, a former president of the Japan Federation of Bar Associations, attends a press conference in Tokyo on May 14, 2021, after submitting a petition calling for the cancellation of the Tokyo Olympics. (Kyodo)

"Holding the Olympics should be welcomed by everyone, but that is not possible under the current situation. So the Olympics must be canceled," Utsunomiya, former head of the Japan Federation of Bar Associations, told a press conference after handing over the request addressed to Tokyo Gov. Yuriko Koike.

The submission of the request comes with only 70 days until the scheduled opening of the postponed Tokyo Olympics.

Uncertainty looms over the Tokyo Games as Japan grapples with surging infections driven by highly contagious virus variants in the capital, now under an extended state of emergency, and elsewhere.

"It is a question of which should be prioritized, people's lives or the event itself," said Utsunomiya, reflecting increased public opposition expressed in recent weeks as many hospitals have become overwhelmed due to the rising number of COVID-19 sufferers.

"To hold the Olympic and Paralympic Games would cause a massive movement of people and would surely endanger the health of not only Japanese people but also those who come to the country for the sake of the games," said the English version of the request, sent to the two international bodies.

At a regular press conference held hours later, Koike said she "understood from media reports" that Utsunomiya had made the request, but she did not share her thoughts on the petition.

Koike said different divisions of the metropolitan government are trying to contain the resurgence of infections and realize a "safe and secure" Olympics.

"It is the role of the Tokyo government to make progress on both fronts, and we have been working on them every day. That is all that needs to be said," she said.

It quickly gathered support as it was passed around on social media. According to Change.org, the platform hosting the petition, people from over 130 countries, including Britain, Canada, India, Malaysia, Singapore and the United States, have signed.

Change.org said a week ago the anti-Olympic campaign is the fastest-growing petition on the Japanese version of the website which was launched in 2012.

On Friday, Olympic minister Tamayo Marukawa said 45 municipalities across Japan have so far given up their plans to host athletes for pre-Olympic training camps and cultural exchanges due to concerns over the pandemic.

Marukawa told a press conference that 32 of the 45 municipalities that decided to pull out of the government's "Host Town" programs said they were notified by their prospective guests that they will abandon their plans to visit.

The government is calling for those communities' interactions to continue online and through other means.