Japanese wrestlers are set to compete in 12 of 18 categories at this summer's Tokyo Games, including all six women's weight classes, following the conclusion Sunday of the final world Olympic qualifier in Bulgaria.

The president of the Japan Wrestling Federation has set the ambitious target of 10 medals, including five gold, at the July 23 to Aug. 8 Olympics.

"Wrestling is about winning gold medals. We really want to get results," said Shigeki Nishiguchi, the technical director of the JWF. 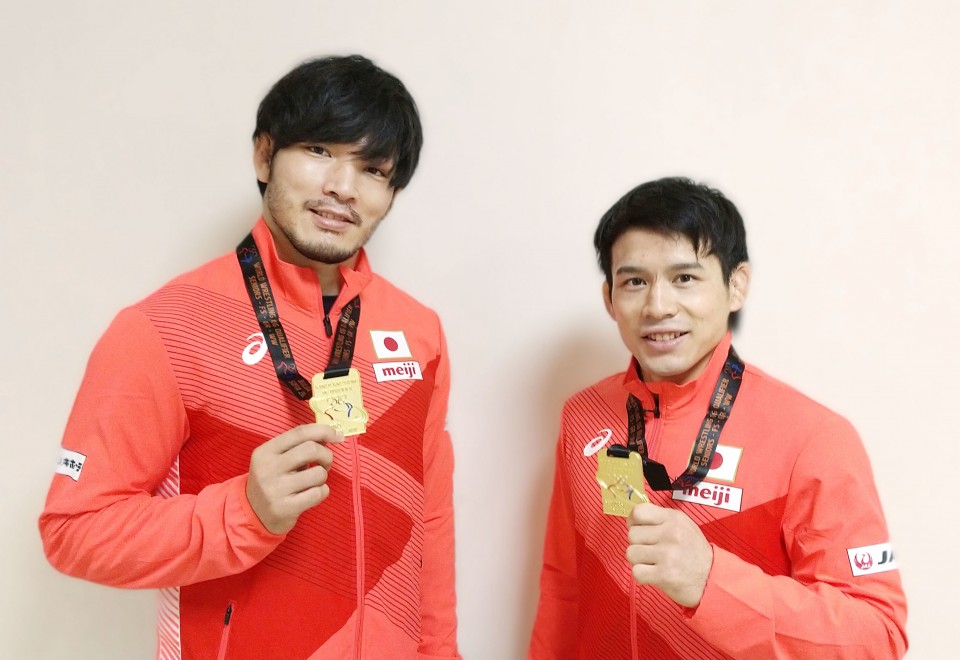 Japanese wrestlers Sosuke Takatani (L) and Yuki Takahashi display their medals after winning the men's 86-kg and 57-kg freestyle, respectively, at an Olympic qualifying tournament in Sofia on May 7, 2021. (Editorial use only)(Kyodo)

Qualification was up for grabs in Greco-Roman, freestyle and women's competitions at the United World Wrestling tournament in Sofia, with the respective finalists in each weight class earning Olympic spots.

Yuki Takahashi won the men's 57-kilogram freestyle in a walkover, having secured an Olympic berth by reaching the final at Sofia's Arena Armeec Sport Hall.

Sosuke Takatani booked his ticket to a third straight Olympics by reaching the men's 86-kg freestyle final, which he also won in a walkover.

In Greco-Roman, Shogo Takahashi fell short of a men's 67-kg Olympic berth on home soil, winning three bouts before bowing out in the semifinals.

Japan will be represented in Greco-Roman wrestling at the Tokyo Games by 2019 world champion Kenichiro Fumita in the 60-kg category and Shohei Yabiku in the 77-kg class. Four Japanese men will contest freestyle weight classes.

The Japan women's wrestling team, headlined by 2016 Olympic gold medalist Risako Kawai, is expected to contend for medals in every weight class.

Having already sewn up Olympic qualification, the team withdrew from the recent Asian championships in Kazakhstan following a positive coronavirus test by someone connected with the team.

They will complete their Olympic preparations domestically, avoiding contact with people outside the team once they enter training camp in July, according to Nishiguchi.

Kawai, who will fight for 57-kg gold, and younger sister Yukako, wrestling at 62 kg, have not competed since the February 2020 Asian Championships in India, before the coronavirus pandemic brought the wrestling calendar to a standstill.

The men's freestyle team is also expected to finish the remainder of its Olympic buildup inside Japan, while the Greco-Roman team is still weighing its options.

"Even if we want to (compete) abroad, we have to think twice. We'll be alright doing whatever we can," Nishiguchi said.