Shoma Sato set a Japan record in the men's 200-meter breaststroke at the national championships on Wednesday to punch his ticket to this summer's Tokyo Olympics.

The 20-year-old took the lead after the first turn in a high-octane race and finished in 2 minutes, 6.40 seconds at Tokyo Aquatics Centre. His time was 0.28 off Russian rival Anton Chupkov's world record. 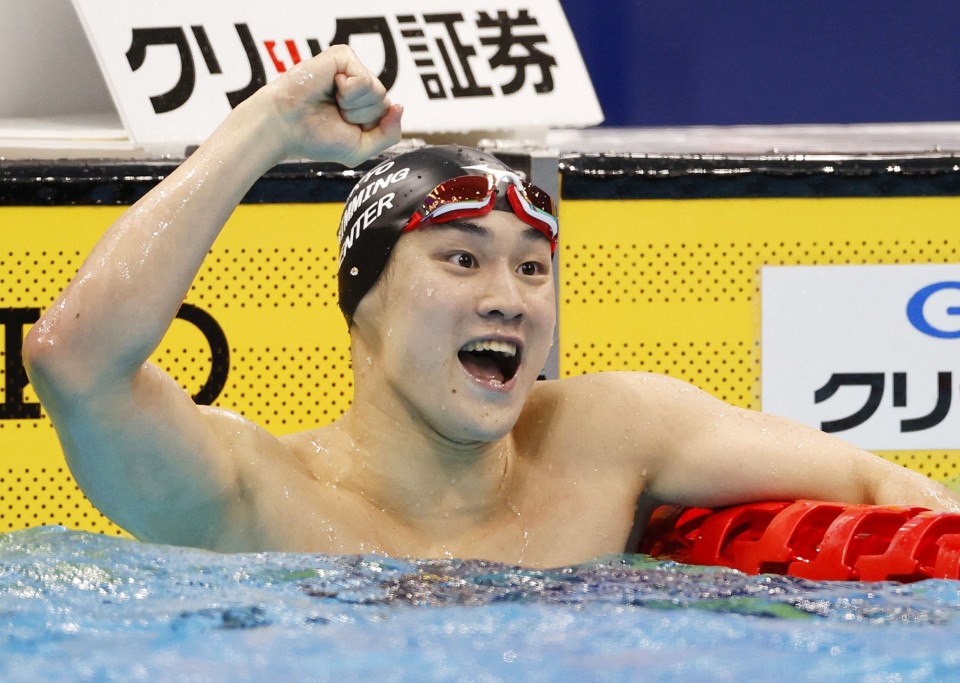 Shoma Sato celebrates after setting a Japan record of 2 minutes, 6.40 seconds in the men's 200-meter breaststroke at the national championships at at Tokyo Aquatics Centre on April 7, 2021. (Kyodo)

"I couldn't see others around me at all, I was just focused on my race from start to finish," Sato said after securing his maiden Olympic place. "In my semifinal, from 100 meters to 150 meters, my pace dropped off, so I tried to maintain it there."

Suzuka Hasegawa won the women's 200 butterfly in 2:07.24, booking her second straight Olympic berth and making up for her disappointment in missing out on a place in the 4x100 medley relay. That went to Rikako Ikee following her victory in the 100 fly.

Katsumi Nakamura is headed to a second straight Olympics thanks to his victory in the men's 100 freestyle in 48.23. Katsuhiro Matsumoto, Kaiya Seki and Akira Namba joined Nakamura in the 4x100 relay team by meeting the qualifying standard.

Having stolen the headlines after winning an Olympic place in the 4x100 medley relay, Ikee continued her impressive comeback from leukemia with the fastest time from the 100 freestyle semifinals, 54.36.

Ikee, who also led the heats in 54.30, made a worryingly slow start in her semifinal but picked it up a notch after the turn to comfortably hold off her rivals. Chihiro Igarashi was closest behind her in 54.74.

Ikee, who was diagnosed with the disease in February 2019 and only returned to the pool in March last year, can earn an individual Olympic spot in tomorrow's final by finishing first or second and beating the required standard of 53.31.

The 20-year-old can earn a spot in the 4x100 relay with a top-four finish if she beats 54.42, a time she surpassed in both of Wednesday's races.

"I'm having the kind of races I wanted to have," Ikee said after the semifinals. "I've been looking forward to it (freestyle). I'm managing to enter races with a sense of composure."

"If I keep going this way, I can definitely get below 54 seconds...I thought it would be a while before I get the 100 freestyle crown back, but sure, I'm going for it."