Tokyo Olympics to be held without foreign spectators due to pandemic

The organizing bodies of the Tokyo Olympics and Paralympics formally decided Saturday that this summer's games will be staged without overseas spectators due to the coronavirus pandemic.

The unprecedented decision was made by the heads of the organizers, including the International Olympic Committee and the Tokyo metropolitan government, during a remote meeting that was held just four months before the rescheduled games are set to open in the Japanese capital.

"It is very unfortunate, but seeing the current state of infections and what should be done to avoid causing strains on our medical system, it cannot be helped," Seiko Hashimoto, president of the Japanese organizing committee, told a press conference.

The organizers agreed to hold another meeting in April to set a direction on the issue of how many people will be permitted to watch athletes in the stands, but they will continue to monitor the situation in the country to be flexible in deciding the specifics.

IOC chief Thomas Bach said that the top priority of the organizers is to ensure the safety of all participants of the games and people in Japan.

"We share the disappointment of all enthusiastic Olympic fans from around the world," Bach said in a statement. "For this I am truly sorry. We know that this is a great sacrifice for everybody."

For people who missed out on the opportunity to watch the games live at venues, the organizers said they will do their best to help them feel a similar excitement.

The number of recorded coronavirus cases in Japan is relatively small compared to some other countries, but many people have voiced skepticism over whether the organizers can prevent the virus from spreading during the Olympics and Paralympics, which will involve some 15,000 athletes from around the world.

Before the meeting, the Japanese government had already concluded that allowing overseas spectators for the games is not feasible, given that the threat from the virus is far from over and fears that foreigners could bring more contagious variants detected in many countries.

Japan's Olympic minister Tamayo Marukawa (R) and Seiko Hashimoto (2nd from R), head of the Tokyo Olympic and Paralympic organizing committee, are pictured in Tokyo during five-party talks on March 20, 2021, with Tokyo Gov. Yuriko Koike (L) and International Olympic Committee President Thomas Bach seen on the screens. The five organizers decided that the games will be staged without overseas spectators due to the coronavirus pandemic. (Pool photo) (Kyodo) ==Kyodo

According to several officials with the knowledge of the planning, the Japanese organizers are now considering admitting up to 50 percent of venue capacity.

They will also review the number of officials to be allowed at the games, including reporters and staff in charge of supporting athletes, by April.

In a related development, the Japanese organizers have determined that people living overseas will not be allowed to volunteer at the games in principle as part of precautions against the spread of the COVID-19 disease, officials with knowledge of the plan said on condition of anonymity.

About 10 percent of the roughly 80,000 games volunteers were foreign nationals, the organizing committee said before the games were pushed back one year ago.

The government will consider ways to permit the entry of volunteers from abroad whose roles are difficult to be replaced by somebody living in Japan, such as those who are capable of speaking minority languages.

In early March, the five bodies organizing the Tokyo Olympics and Paralympics agreed to settle the issue of spectators in two stages -- deciding on what to do about those from abroad by the end of the month, then fixing the maximum capacity of venues in April.

The organizers are entering the final stages of their preparation for the Olympics and Paralympics, which were postponed for one year due to the pandemic.

The nationwide torch relay will begin Thursday in the northeastern prefecture of Fukushima, despite the health crisis, to build momentum in the lead-up to the Olympic opening ceremony on July 23.

The organizing committee had estimated that ticket sales would generate 90 billion yen ($826 million). While the total number of tickets to be sold has not been disclosed, some officials have said it was projected to be over 9 million.

Despite the one-year delay, the Japanese government had initially hoped that having as many spectators as possible at the games and inbound visitors to the country would help revive its economy from a coronavirus-induced downturn.

The Tokyo Games organizing committee has sold about 4.45 million tickets through the domestic lottery but received refund requests for some 810,000 tickets last year.

Since confirming the first case of the novel coronavirus in January last year, Japan has reported over 455,000 infections and about 8,800 deaths attributed to COVID-19.

Japan has lagged behind other countries such as the United States and Britain in its vaccine rollout amid a supply shortage. 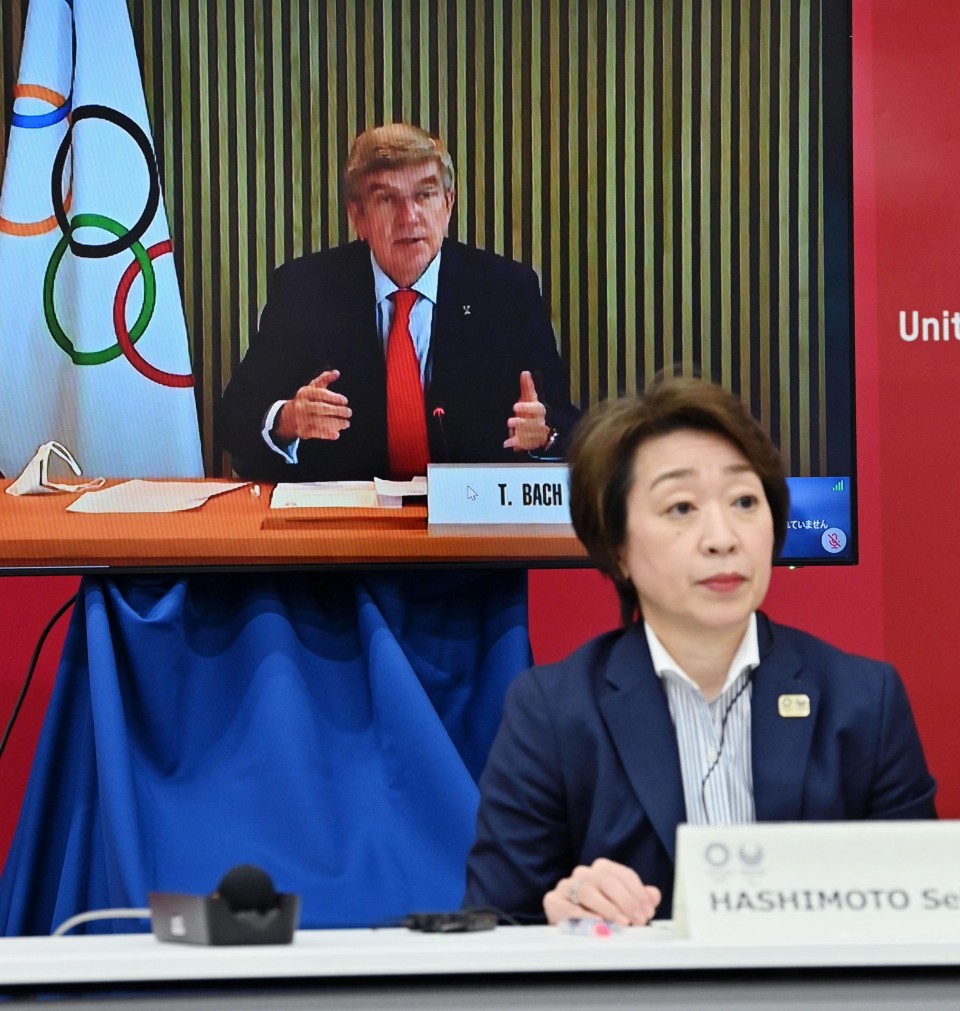 Seiko Hashimoto (front), head of the Tokyo Olympic and Paralympic organizing committee, is pictured in Tokyo during five-party talks on March 20, 2021, with International Olympic Committee President Thomas Bach seen on the screen. The five organizers decided that the games will be staged without overseas spectators due to the coronavirus pandemic. (Pool photo) (Kyodo) ==Kyodo

No spectators at opening ceremony of Tokyo Olympic torch relay